BA stated, “market conditions continue to be very challenging with trading at levels well below last year, but added, “an underlying basis for both premium and non-premium volumes and seat factors have now been stable for more than three months”.

What BA did not say was that premium traffic was already falling this time last year – by 3.1% in June-2008 over June-2007 – compounding the decrease.

The sum of the two-year percentage changes in BA’s premium traffic for the first six months of 2009 are as follows:

It is clear a recovery in premium traffic has not started, while a rolling 12-month moving average shows a steady downwards trajectory. 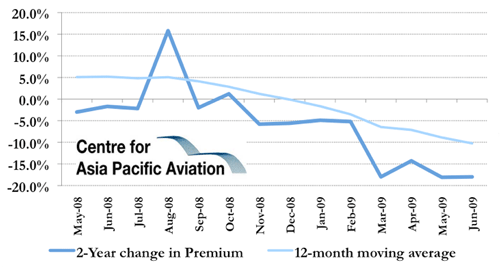 Yields likely to have fallen much further

BA's figures reflect premium volumes. This is distinct from average yields, which are likely to be much worse, given the discounting in the market to boost volumes. (Across the Atlantic, Continental Airlines' yield remained very depressed last month).

The discounting of premium product stimulates some additional travel at the front end, thereby inflating the traffic and load factor numbers.

Unsurprisingly, BA has again reviewed its business plan, announcing further capacity cuts in response to the challenging economic conditions. Capacity for the current Summer period (April to October) is now expected to be down 3.5% (previously 2.5%), with capacity in the Winter down 5% (previously 4%).

The airline’s remaining three mainline B757s will be grounded in Summer 2010 (see separate report on the future of OpenSkies) and a further three B747-400s in Winter 2010.

Meanwhile, the delivery schedule for the first six Airbus A380 aircraft has been extended by an average of five months, although the first delivery is still due in 2012.  The schedule for the remaining six A380s has been extended by an average of two years with the final aircraft arriving in 2016.  These delays presumably constitute a compromise between timing and penalty rates for delaying delivery.

Forecast capital expenditure has been reduced from GBP725 million to GBP580 million for 2009/10 and is likely to remain at that level in 2010/11, while some 7,000 BA employees have volunteered for schemes in support of the airline's cost reduction programme, saving the company up to GBP10 million.

With each month that passes without an uptick in its core premium traffic market, BA goes deeper into intensive care. Even more aggressive steps to stem its cash burn may be required in coming months. For one, OpenSkies’ days under BA’s wing appear numbered.