European carriers’ stocks were mixed on Friday (29-Jan-2010), despite gains in the European markets on data the US economy grew at a 5.7% pace in 4Q2009, a better than expected result, and the fastest climb in over six years. Also boosting the markets, banking shares recovered slightly, on better news out of Greece.

In other British Airways news, the carrier, along with American Airlines and Iberia, reportedly entered negotiations with the European Commission regarding concessions over landing slots at London Heathrow International Airport to ensure approval of their anti-trust immunity application for a trans-Atlantic pricing, coordination and revenue sharing agreement.

Aeroflot meanwhile made the largest gain on Friday, despite reporting a 5.6% year-on-year fall in passenger numbers for Dec-2009.  Load factor meanwhile fell 1.4 ppts, to 69.5%. 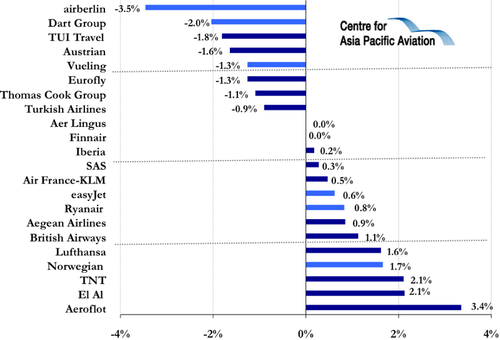