The year that was…

Below are some summary quotes from the CEOs of Europe’s Big Three about their airlines’ performance over the past year.

British Airways’ chief executive, Willie Walsh, stated that despite the massive drop in revenue during the year, “our determined efforts on cost control mean that costs have reduced at a comparable level and our operating loss is virtually the same as in the previous year”. He added, “to be in the midst of the biggest economic downturn in 60 years and produce the same operating figure as last year shows the hard work that has been put into steering our business through the recession”.

Mr Walsh stated, “returning the business to profitability requires permanent change across the company and it’s disappointing that our cabin crew union fails to recognise that. Structural change has been achieved in many parts of the business and our engineers and pilots have voted for permanent change. We signed our merger agreement with Iberia in early Apr-2010 and are on track to complete the merger by the end of 2010…Both airlines will retain their separate operations and individual brands. The group will generate enhanced customer benefits with a larger combined network and continued investment in new customer products and services. It will deliver annual synergies of EUR400 million by year five".

Mr Walsh stated, “the current financial year could hardly have had a worse start with the unprecedented closures of UK airspace following the eruption of the volcano in Iceland. This added to the aviation industry’s current financial woes while highlighting its crucial contribution to the economy. We are pleased that the European Commission has agreed that national governments can compensate airlines for the losses incurred. We are not looking for a bail out, only for compensation for the losses caused by the airspace closure which was something completely out of our control”.

British Airways' chairman Martin Broughton, added, “while the outlook is becoming slightly more positive, we urge the Government to reconsider its plans to tax the aviation industry, which already more than pays its way in taxation, isn’t used as a convenient source of public sector funding through increased taxes. The industry is vital to the UK economy and the travelling public as the airspace closure indicated yet we have a larger, and increasing, tax burden than other transport sectors”.

Air France-KLM CEO, Pierre-Henri Gourgeon, stated: “2009-10 will go on record as our ‘annus horribilis’. The global economic crisis had a profound effect on the entire airline industry. In addition, Air France-KLM had to contend with the tragedy of the Rio-Paris accident of June 1st 2009. During these demanding times, the strengths of the Air France-KLM combination have come into their own, and its efficiencies have proven even greater than expected. As a result, we have been able, together with Peter Hartman, to rapidly implement drastic changes within the group.

Mr Gourgeon added, "the entire workforces of Air France and KLM have been mobilised under the motto ‘keep the family together’, and have delivered an outstanding performance. With their support, we have launched a robust action plan, based on three pillars: controlling capacity and investments, adapting our business models in passenger and cargo, and strengthening our alliance and partnerships. These actions have started to bear fruit and will enable us to emerge from the crisis with a young fleet, a rejuvenated product offer, adapted to the needs of our customers, and a preserved financial position.”

Lufthansa Chairman and CEO Wolfgang Mayrhuber, in reviewing the figures for the 12 months to 31-Dec-2009, stated, "we are succeeding in the crisis because our business segments are broadly-poised and ideally-equipped, and because we have a strong balance sheet. In addition, we have taken targeted and swift evasive action to steer capacities and costs; without ever losing sight of the customer. Despite the highly challenging conditions, we cannot be satisfied with our operating profit, but it remains nevertheless a remarkable performance. It marks the reward for the consistent efforts invested in improving profitability and is the result of the hard work performed by all.” Mr Mayrhuber added, “no one can say how long it will take for us to make up for the current losses. A solid balance sheet, efficient capacity adjustments and the reduction of costs are, and will remain, the decisive factors for success”.

Regarding the latest quarterly figures to 31-Mar-2010, Lufthansa CFO, Stephan Gemkow, stated, “a recovery in demand is not enough to secure a good result, cost efficiency and increasing revenues even further are also absolute musts. We have laid the foundations in all business segments and introduced the corresponding measures to safeguard earnings. We remain convinced that Lufthansa shall emerge from the crisis a stronger Group.” Mr Gemkow added, "in terms of improving efficiency, all the business segments have now already achieved a lot and that is a strong performance by all of the employees, but we want to achieve even more here".

Europe’s Big Three carriers are reporting more encouraging signs for 2010, although they were all deeply loss-making in what is traditionally a tough March quarter. Air France-KLM’s March quarter operating margin of -9.9% was the worst of the big three, followed by BA’s -7.8%. 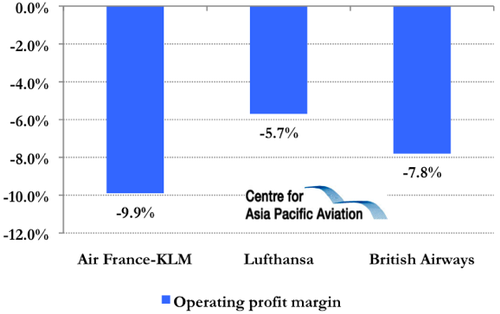 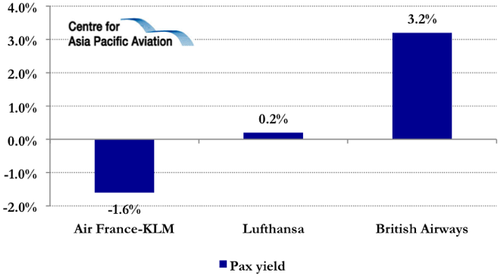 British Airways' Group revenue in its fourth quarter (ended 31-Mar-2010) was down 4.7% to just under GBP1.9 billion with operating costs down 11.4% to GBP2 billion. This resulted in an operating loss for the quarter of GBP145 million, an improvement of GBP164 million from a loss of GBP309 million in the same period last year. Operating costs excluding fuel were down 5.9%. Passenger revenue for the fourth quarter was down 3.2%. Yields were up 3.2%, or 5.8% excluding the impact of exchange.  The quarter’s operating loss included seven days of strike action with a net cost of GBP43 million. 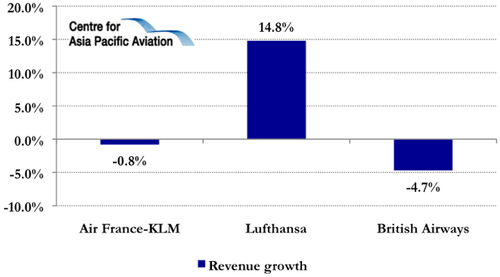 Air France-KLM reported Group revenues eased just 0.8% in its fourth quarter (ended 31-Mar-2010) to EUR5.02 billion. The carrier noted that passenger demand picked up, “especially at the end of the quarter”. Revenue trends were also positive with an improvement in both premium and economy. In total, unit revenue per available seat kilometer (RASK) was up 2.7%, and by 3.5% on a constant currency basis. Operating losses of the passenger business stood at EUR381 million (or a EUR239 million loss excluding the impact of pre-2009 fuel hedges). Although production measured in equivalent available seat kilometres (EASK) declined by 5.1%, unit costs per EASK rose by 4.9%, but by only 1.0% on a constant currency and fuel price basis. The net loss restated for non-recurring and non-cash items related to the hedging instruments amounted to EUR477 million – an improvement from the EUR610 million loss in the same period last year. 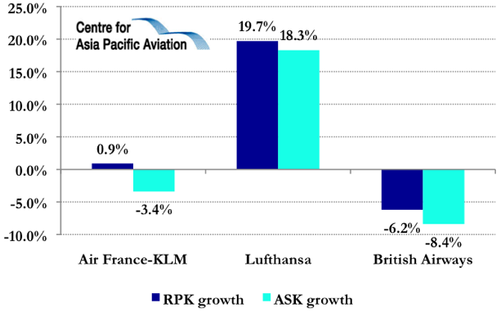 Lufthansa Group reported a 14.8% increase in revenues to EUR5.8 billion in the first three months of its current financial year (to 31-Mar-2010). Traffic revenue rose by 20% to EUR4.6 billion, while operating expenses rose by 14.8% to EUR6.7 billion. The Group posted an operating loss of EUR330 million for the first three months of 2010 - EUR286 million less than the same period the previous year. The Passenger Airline Group and Logistics business segment were able to “significantly improve traffic performance in the traditionally weak first quarter”, but the "slump in prices continues to place a burden on the result of the Passenger Airline Group”. An extreme winter, as well as the strike and the threat of further industrial action by the pilots’ union, Vereinigung Cockpit, led to additional revenue losses and follow-up costs. Lufthansa Group posted a net loss of EUR298 million for the first quarter of 2010, compared to a EUR267 million loss for the same period a year earlier.

See related report: Lufthansa losses ugly. Is this a strategy in trouble? Board still upbeat on “positive demand trends”

Overall, British Airways stated that market conditions are “showing improvement from the depressed levels in 2009/10”, with the cargo segment “showing significant signs of improvement”. Passenger revenue is recovering, with increased corporate activity, particularly across the Atlantic, while yield is expected to continue to improve from the “strengthening position seen in Quarter 4”, according to BA. BA has decided to re-introduce one B747 into service this Winter and will “keep capacity under review as market conditions develop”. On the basis of this, BA is targeting revenue growth of approximately 6% in FY2010/11 and break-even at the profit before tax level.

For Air France-KLM, the outlook for FY 2010-11 contains the overriding objective of maintaining operating break-even (excluding impact of pre-2009 fuel hedges), but this is subject to the “definitive cost of European airspace closure”. The Group witnessed stronger demand and improvement in unit revenues at the end of the fourth quarter, producing a better than expected operating result. For the current year, the group’s priorities are to “control costs via headcount reduction, and to restore unit revenues by limiting capacity growth (+1% for passenger and zero for cargo). Elsewhere, the benefits of the measures launched in 2009-10 to “adapt both our products and our organisation will continue to feed through”.

Lufthansa is also optimistic for the current business year. It expects a rise in revenue and a positive operating result for the Group.” Mr Gemkow added that the development of the business year to date had further strengthened its expectations of achieving a positive operating result higher than the previous year’s. However, the condition for this would be that flight operations and operational developments in the other business segments are not disrupted by a repeated or prolonged operational regulatory on flights. He also identified additional risks in possible further industrial action, the development of the oil price and the consolidation of bmi and Austrian Airlines, "which will continue to burden the result during the current business year".