European carriers’ shares were mixed on Wednesday (10-Mar-2010), as oil prices (+0.7%) rallied again, reaching USD82.09 at the end of trading. Wider markets meanwhile gained on positive economic data from the US, while banking and mining sectors also pushed shares higher.

British Airways (+3.7%) and Iberia (+2.6%) gained after offering, with American Airlines, to lease slot pairs to other airlines to use on specified transatlantic routes from London to "enable the European Commission (EC) to conclude its investigations into their transatlantic joint business". Additional daily slot pairs could be required to be made available, should competitive conditions between London and New York change.

The European Commission launched an investigation into the proposed trans-Atlantic cooperation agreement between the carriers in Apr-2009, which will also include other oneworld carriers Finnair and Royal Jordanian. The airlines also require US Department of Transportation (DoT) anti-trust immunity to operate their transatlantic joint business. The airlines received tentative approval from the DoT in a show cause order published on 13-Feb-2010.

Aer Lingus (-3.7%) fell after the carrier reported an operating loss of EUR81 million for the 12 months ended 31-Dec-2009, compared to a loss of EUR20 million for the previous corresponding period. Total revenue declined 11% to EUR1,206 million, with strong performance in ancillary revenues offset by reduced passenger fare and cargo revenue.

Air Berlin (-1.3%) was also down as it announced plans for continued growth in its strategically important markets in 2010. The carrier plans to strengthen its Berlin hub.

Other stories in today’s issue include: 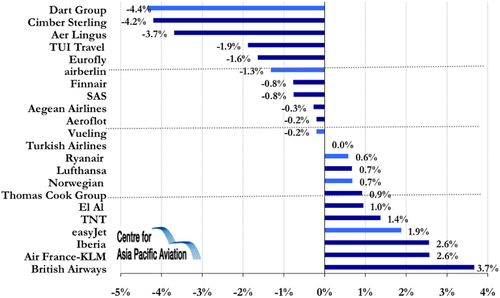