European airline shares were up on Monday (01-Feb-2010) due to Ryanair’s better than expected third quarter financial results and an analyst upgrade on a number of carriers. Banking and insurance stocks, and gains on Wall Street, also pushed markets higher.

Ryanair (+7.2%) shares reached their highest level in over four months after the carrier raised its earnings forecast and reported a smaller than expected 3Q2009-10 loss of EUR11 million (compared with EUR119 million in the previous corresponding period).

Shares were also boosted by a price target upgrade by Goldman Sachs (see below).

British Airways (+5.6%) and Iberia (+2.2%) rose after the European Commission (EC) confirmed it is assessing the effectiveness of proposed commitments received from the carriers and American Airlines to alleviate the EC's concerns regarding potential anticompetitive agreements (related to passenger transport on certain long-haul routes).

As part of this assessment process, the EC is sending the proposed commitments first to a number of key market players for comments. In Apr-2009, the EC opened proceedings in relation to its concerns about agreements between the three carriers. The carriers intend to jointly manage schedules, capacity and pricing, as well as share revenues on transatlantic routes between North America and Europe.

Investors are now hopeful the planned merger between British Airways and Iberia will proceed. Goldman Sachs reiterated its positive view of the carriers’ shares, stating they believe the merger will occur, possibly ahead of schedule. The analysts added this, plus the potential antitrust immunity with American Airlines, will boost BA and Iberia’s shares. As a result, Goldman Sachs increased both carriers’ target prices (see below).

SAS (+7.5%) meanwhile made the biggest rise, after Goldman Sachs analysts raised the carrier’s share rating from ‘Sell’ to ‘Buy’, stating its upside/downside risks are “evenly balanced”. 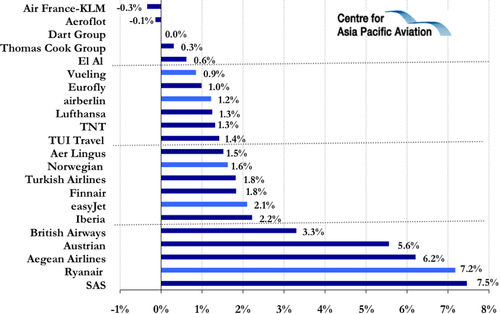