European carriers mostly witnessed a decline in shares on Tuesday (23-Feb-2020), moving lower with the wider market which fell after the US Conference Board Consumer Confidence Index declined sharply in Feb-2010 to 46.0, down from 56.5 in Jan-2010.

British Airways (+1.1%) was one of few carriers to gain on Tuesday after the carrier and its cabin crew union, Unite, indicated that the two have made progress since resuming negotiations earlier this week. Talks are being held under the auspices of the UK’s Trades Union Congress. British Airlines Stewards and Stewardesses Association (Bassa) stated it is yet to issue a strike date, as it does not want to strike and hopes British Airways will now listen to its requests.

Iberia (+1.2%) was also up, despite analysts stating they expect the carrier to report a net loss for FY2009, following a decline in revenue, as a result of lower demand and weaker premium traffic, according to Dow Jones. Analysts believe the carrier’s cost cutting programmes and route network adjustments will not be enough to offset the losses.

Vueling down despite EUR27.7 million profit 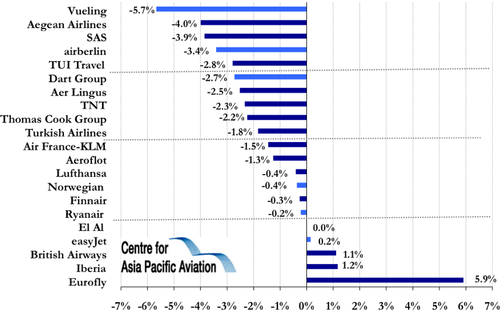