Shares in British Airways and Air France-KLM eased 3.4% and 0.3%, respectively on Friday as concerns persist about premium traffic levels as Europe's economic downturn continues. Lufthansa was steady as it confirmed its purchase of bmi would take longer to complete as it negotiates "further terms" with bmi Chairman, Sir Michael Bishop.

Sir Michael exercised his option in Oct-2008 to sell his 50% plus one share stake in the carrier he founded and while the deal has gained regulatory approval, Lufthansa has its hands full with other deals involving Brussels Airlines and Austrian Airlines.

German newspaper, Suddeutsche Zeitung, reported over the weekend that Lufthansa is no longer interested in acquiring control of bmi because the price is too high and bmi's financial position was more fragile than expected, without citing sources. Sir Michael had previously refuted claims the airline was at risk of breaching any regulatory rules on capital reserves.

A fortnightly wrap of key European airport and airline developments is contained in Airport & Airline-Europe. 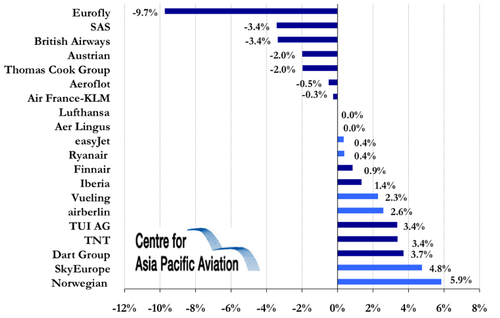