Brazil’s start-up carriers, led by Azul Linhas, Webjet and Trip, have been quietly expanding their presence in the domestic market over the past 12 months, increasing their market share of Brazil’s still-growing USD6.5 billion domestic market from 8% to 14%.

This figure is likely to continue to grow, with Azul, WebJet and Trip alone planning to invest approximately USD530 million in new aircraft to support domestic network expansion in 2010 and beyond. 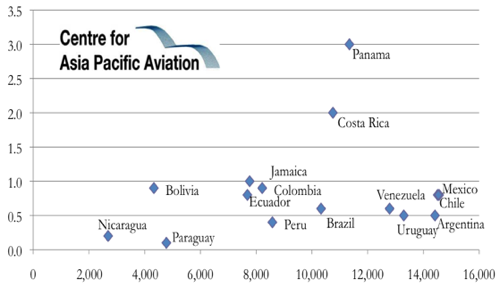 David Neeleman-led Azul, Brazil’s most recent start-up, has already captured 5.0% of the domestic market to become the third largest airline in the country, according to Brazil’s National Civil Aviation Agency (ANAC).

Azul, at the commencement of operations, stated it planned to gain a 3% domestic market share in Brazil by the end of 2009 by offering fares 15-20% lower than its two main competitors, full service TAM and LCC GOL.  The carrier has reached this target just half way into the year, with no slowdown in sight.

Brazil domestic capacity (seats per month), LCCs as a percentage of the total: Jan-Aug-2001 to Jan-Aug-2009 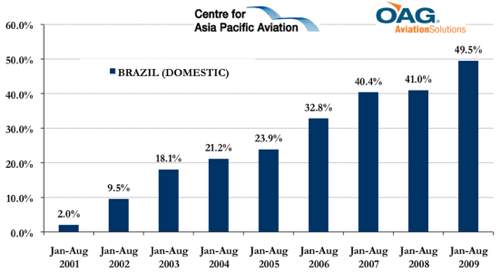 The privately-owned start-up carrier this month stated it may take advantage of a slackened delivery schedule at Embraer to order more aircraft in 2010, with CEO, Pedro Jano, stating, "what we have are opportunities as European and North American companies cede their spaces in Embraer's queue".

Mr Janot stated the carrier plans to operate an all-Embraer fleet for at least ten years and is not considering aircraft from other manufacturers. The company currently has 12 Embraer jets in its fleet (seven E190s and five E195s), which is expected to grow to 14 by the end of 2009. Looking further ahead, the carrier plans to operate a fleet of 40 aircraft by the end of 2011, a 42-aircraft fleet by 2012 and 76 aircraft in five years.

According to Azul, its rapid expansion is viable, even in the challenging economic environment, with the carrier expecting to report monthly profits by the end of 2009, due to increasing load factors, which reached 70.2% in Aug-2009, and a full-year profit by 2010. The carrier has previously stated that it would be able to reach breakeven with an average load factor of 60%.

The carrier plans to continue to grow its rapidly expanding network, which has increased from three destinations at launch (Campinas (Viracopos Airport), Salvador de Bahia, and Porto Alegre to 14 cities currently, with plans to serve 25 cities throughout Brazil by the end of 2009.

The carrier reportedly plans to commence operations by the end of Sep-2009 and has already received the first of five aircraft and hired and trained employees.

Sol initially plans to operate to Cascavel, Curitiba, Foz do Iguaçu and Maringá (all in the state of Paraná), with future plans to operate to other domestic cities in Paraná and to the states of Santa Catarina, Rio Grande do Sul, São Paulo andMato Grosso do Sul. The carrier also plans to launch service to neighbouring Paraguay in the future.

Noar: Nordeste Aviação Regional Linhas Aéreas (Noar) has also obtained a license, and now only needs to meet the requirements for obtaining the Certificate of Homologation for Air Transport Companies (Cheta) to commence operations.

According to ANAC, over the last five years, nine other new companies were awarded concessions to operate regular domestic passenger, cargo and postal services. Two other companies were authorised to transport cargo/mail only services.

All this new entrant activity is helping to stimulate the Brazilian air market back to life. Brazil’s total domestic market traffic (RPKs) increased 9.4% year-on-year in Aug-2009, while international traffic was down (only) 3.4%, due to significant international capacity rationalisation by GOL/VRG.

These positive domestic traffic developments in the past few months have continued to create speculation that Brazilian air travel demand will recover in 2H2009 and 2010.

This also coincides with an expected economic recovery, with Brazilian Finance Minister, Guido Mantega, stating recently that he expects the economy to grow by approximately 1% in 2009.

TAM’s domestic load factor fell 4.9 ppts and GOL increased domestic capacity by 15.6% in the month, as it directed most of its seats towards the domestic market, and away from its international operations (international capacity was down 39%), in line with its focus on increasing the profitability of its network.

The best news is that yields may be stabilising.

TAM, upon the release of its Aug-2009 traffic results, stated that domestic yield in the month presented a recovery compared to Jul-2009 levels, with 3Q2009 yields expected to “remain stable or slightly below” 2Q2009 results.

The carrier added that it observed a return of business passengers in Aug-2009, due to the end of vacations and the absence of holidays in the month, although business passengers have returned in a “modest way, an indication that the industry still is impacted by the global economic crisis”.

GOL similarly reported that average net yield in Aug-2009 remains above Jul-2009 levels and higher than the BRL 19.43 cents (USD 10.53 cents) reported in 2Q2008, but below the BRL 21.93 cents (USD 11.88 cents) posted in 1Q2008. The improved yield figures occurred as the carrier reduced its discount fare promotions, due to “renewed predominance of business trips in August following the end of the July holiday season”.

GOL aiming for profitability in 2009 by focusing on domestic operations

GOL expects to be profitable this year as a result of its network reorganisation and the long-awaited benefits from the integration of VRG/GOL operations, as well as the introduction of ancillary services.

GOL also expects to continue to benefit from economies of scale over the next two quarters of 2009 as it completes its transition from B737-300 and B767-200 aircraft to B737-800 and B737-700 aircraft, as well as benefit from the integration of VRG operations.

However, even though GOL is expected to face intensive competition in the domestic market, having previously stated it is unlikely to be able to increase fares notably in 2009, the carrier plans an increasing focus on the domestic segment in 2H2009.

Instead, GOL plans to continue to expand its codeshare arrangements, with the LCC stating it is “working to have at least five or six large partnerships with major airlines that can complement our domestic network". The carrier added, “there's a huge business opportunity here and we're paying a lot of attention and are very much focused on that."

The carrier, which has already entered interline agreements with over 25 carriers in the past 12 months, has invested heavily in upgrading its frequent flyer platform and reservation systems to support this new codeshare focus, with CEO, Constantinto de Oliveira Junior, stating, “it's very important as it means we'll capture more passengers from long-haul carriers and help us build stronger load factor. Also there's an expectation from our clients to have alternatives to fly outside Brazil."

Meanwhile, GOL announced plans to raise capital through a public share subscription. The carrier plans to issue 17.3 million common shares and the same number of preferred shares. It could add preferred shares up to an equivalent of 20% of the main offer. The company provided no price or date for the offer.

TAM has also stated it is “confident regarding the domestic market recovery” and has accordingly upwardly revised its demand guidance from 2009, to 7-10% (until Jul-2009, demand grew by 6.6%). 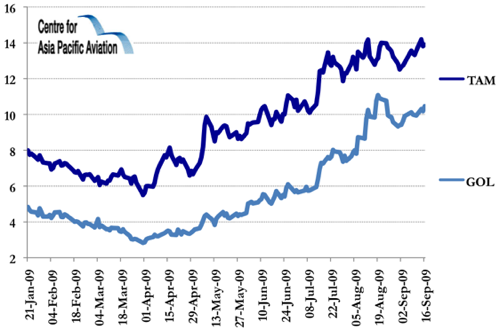 Outlook: GOL and TAM to remain dominant in the major centres

Currently, 70% of Brazil’s domestic demand comes from business travelers, with this market to be predominantly left as the domain of TAM and GOL/VRG.

These two dominant carriers control the majority of landing slots at the country’s major airports, with TAM stating that the 12 major airports in Brazil account for 90% of revenues in the domestic Brazilian market, with TAM and GOL controlling 92% of operations at these airports. This has prompted TAM to state, “we have a strong presence, which will be tough to budge”.

GOL and TAM currently both have a 44% capacity (seats) share of the domestic market. 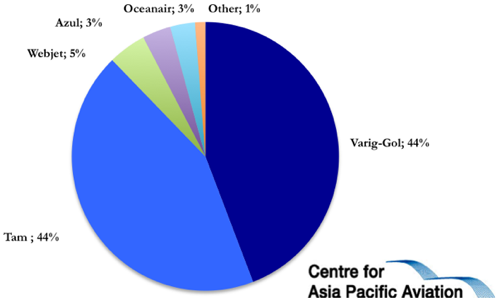 This domination of the business market and slots at the key Brazilian centres, such as Rio and Sao Paulo, is set to limit the smaller carriers' growth in this potentially lucrative segment. According to TAM, “Azul will need to go through the major airports if they grow substantially, and it's natural that we will react, adding new flights in competition to their routes".

GOL, meanwhile, stated that "Azul is benefiting from the expectations placed on the newcomer”, something GOL itself has experienced in recent years. GOL warned that the challenge would be “to continuously innovate to find new forms of success."

Azul Founder, David Neeleman, for one, remains optimistic the new entrants will fill a need in Brazil for low-fare air travel.

He stated, "there is tremendous unsatisfied leisure demand for airline seats because fares are too high. As a result, 150 million people travel by long distance bus. And business travelers suffer circuitous routings and lack of frequency. With only 40% fewer seats per aircraft, we can provide more frequent and direct service in markets that our competition can't economically serve."

Mr Neeleman this month added that he carrier still sees “great potential for growth without competing head on with TAM and GOL. We can tap into first-time fliers, different markets. There is a lot to do."