Brazilian aviation is a study in contrasts. With Brazil being Latin America’s largest aviation market, the opportunity in the country is tremendous – trips per capita remain well below more mature markets, despite a more than doubling of passenger levels during the past decade.

That growth has occurred against a backdrop of tough operating conditions for Brazil’s airlines as the structural costs of doing business in the country remain high.

But there are signs of improvement surfacing, including the country’s government blocking efforts to reintroduce a free baggage requirement, and the consideration of eliminating some taxes. Those signs are fostering optimism that Brazil can reach its full passenger potential, but there remains uncertainty that recent reforms will have staying power.

During the recent CAPA Latin American Aviation and LCCs Summit, IATA regional VP of the Americas Peter Cerda highlighted that Brazil’s passenger levels had grown significantly during the past decade, and during the next six to seven years Brazil is set to become the world’s fifth largest domestic market, overtaking Japan.

Against the backdrop of that growth Brazil’s aviation market has experienced numerous changes, including the debut of the low cost, value airline Azul, a period of consolidation in which Azul merged with TRIP and GOL acquired Webjet, and more recently, Avianca Brazil’s exit from the market.

During the past few years Brazil has been battling various levels of economic weakness. Joining Mr Cerda in a panel discussion, Azul chief revenue officer Abhi Shah stated that Brazil’s average GDP growth during the past five years had been just 0.5%.

Although Brazil’s passenger levels did contract in 2016 during the height of the country’s recession, Brazil posted an 85% hike in passenger growth between 2008 and 2018. 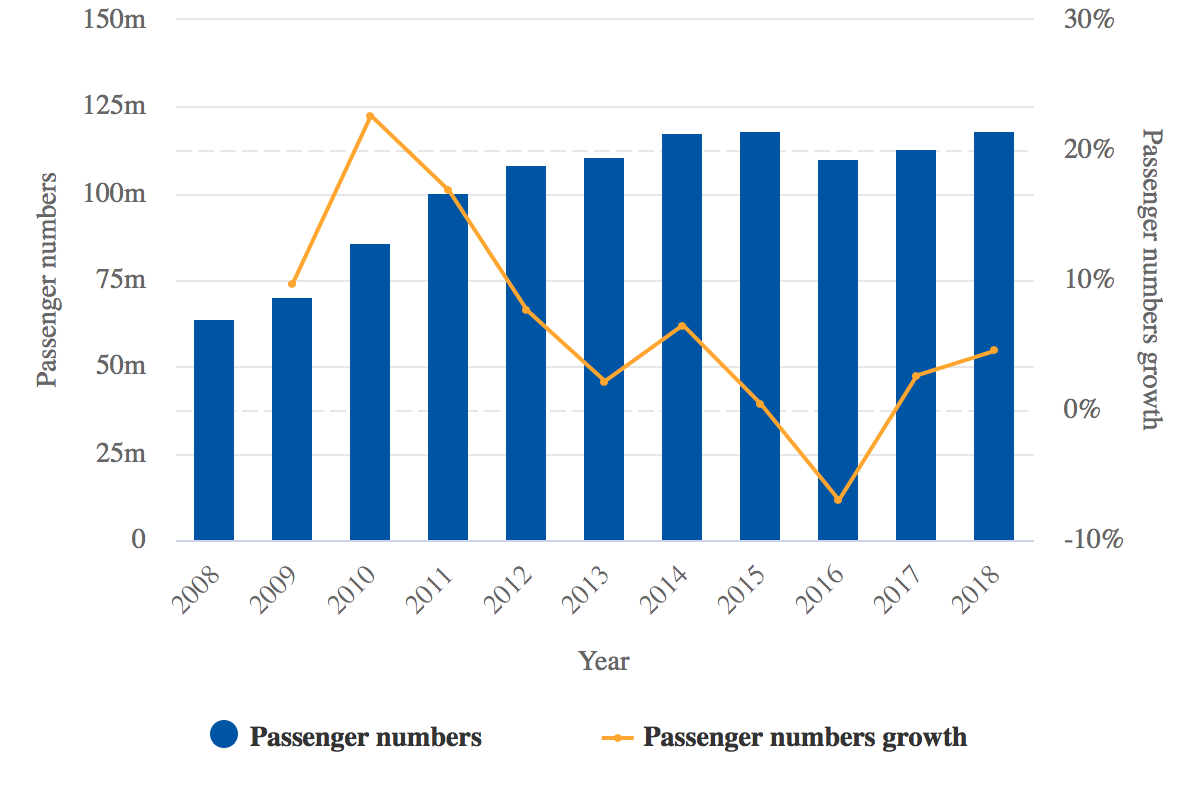 Opportunity remains ripe in the Brazilian market, as broadly 100 million of the country’s 211 million residents have never travelled by aircraft: Brazil’s trips per capita in 2017 were 0.5, compared with 2.6 for the US and 2.3 for the UK.

Azul, which had a 27% domestic passenger share in Brazil for the 8M ending Aug-2019, serves 105 cities in Brazil and is the only airline operating on approximately 72% of its routes.

Even as the opportunity for passenger stimulation in Brazil remains robust, Mr Shah admitted that “there is a structural cost to doing business in Brazil”.

Some of the cities that Azul serves in Brazil are so remote that fuel costs in those markets are three times what they are in São Paulo, said Mr Shah. If there is an aircraft issue in some of those remote markets, it can take up to three days to complete repairs, he noted. As a result, Azul has two Pilatus aircraft that if flies around Brazil with mechanics and spare parts in order to ensure smooth operations.

Mr Shah also pointed to a connection tax the government levies on Brazil’s airlines. “If some of the structural cost issues can be taken out, we can grow even further…”, he said.

Recently, there have been some encouraging developments in Brazil’s aviation market. The administration of President Jair Bolsonaro recently blocked efforts by Brazil’s Congress to reintroduce a free luggage allowance.

There has also been some discussion about gradually eliminating Brazil’s international passenger tax. While nothing concrete has emerged, such a move would definitely be welcomed by Brazil’s airlines.

“That [lifting of taxes] could be beneficial to our passenger flow”, GOL CEO Paulo Kakinoff recently told analysts and investors. He explained that GOL tends to carry more leisure than business travellers on its international network. Those customers are more price sensitive, so a tax reduction “would be meaningful to them”.

Brazil has also joined its fellow Latin American country Chile in allowing 100% ownership of foreign airlines. It is an interesting move, and obviously generated a certain level of buzz, but so far nothing has materialised.

The opportunities for passenger stimulation in Brazil, coupled with the recent changes in ownership levels, would seem like the right formula to attract new operators and investment in Brazil. But the country’s structural hurdles could be hard to overcome. For example, Mr Shah reiterated a challenge often cited by the country’s airlines – Brazil's fuel costs are 50% higher than prices in the US.

There is also the threat of Brazil’s economy growing weaker, which could ultimately crimp domestic demand.

The country’s domestic passengers notched up 0.7% year-on-year in the 8M ending Aug-2019, to 62 million. Traffic was up 0.1% as Brazil’s domestic capacity fell by 2.2% year-on-year. Some of the tepid numbers were driven by Avianca Brazil ceasing operations in May-2019.

For 2019, Brazil’s GDP growth has been projected at 0.8% and approximately 2% for 2020. But uncertainty over trade spats continues to threaten the global economy, and there is some speculation that Brazil’s economy could weaken. Perhaps would-be investors are taking a wait and see attitude regarding Brazil’s economic performance before making any commitment to entering the market.

Brazil's government is sending some encouraging messages to airlines

Brazil’s potential for air passenger growth is undeniable. And although its growth during the past decade has nearly doubled, there is significant upside for passenger stimulation in the country.

But some challenges remain for airlines serving, and hoping to serve, the country. There are some encouraging signs that Brazil’s current government believes easing some of the burdens the country’s airlines face is necessary, but it remains unclear what level of actual reform will occur.

At least for now, some encouraging trends are emerging.