Swiss regional airline Baboo, or Flybaboo as it is marketed, has announced plans to eliminate services from its main base at Geneva to London City and Athens airports from Nov-2010 as it continues to restructure in the face of ongoing losses. Baboo, which expanded its operations to include 18 destinations, will now serve just 10 routes over winter 2010/11.

Baboo is majority owned by a Lebanese group, M1 Travel. It has a fleet of three Embraer E190s and two Bombardier Dash 8–Q400s. Its network operations form a distinct narrow band across western, central and eastern mainland Europe, encompassing Switzerland, Spain, France, Italy and Romania. It also operates seasonal charter flights and has been innovative in that respect. For example, a winter charter series connecting Switzerland with Oxford Airport, an expanded general aviation facility in an affluent part of England and aimed firmly at skiers, but that service was not economically successful.

Although still mistakenly believed by some to be a budget airline, its ethos is firmly rooted in the high service standards common to most Swiss airlines.

Baboo was founded by an English ex-patriate entrepreneur Julian Cook, a former airline financing expert with the Chase Manhattan Bank, in Aug-2003 following Swiss’ decision to abandon the Geneva-Lugano route. A consultant and former Air France executive, Jacques Bankir, was hired as CEO.

In May-2004, the airline obtained its AOC permitting it to operate with its own aircraft – a 50-seat Dash 8-Q300 leased from Bombardier, followed by two Dash 8-Q400s, partly funded by a EUR9 million equity increase.

Subsequently Baboo ordered three E190s and announced ambitious routes to Kiev, the Ukraine, and St Petersburg in Russia, (neither route ever operated) then to Toulouse, Bordeaux, Bucharest, Athens and Zagreb, of which the first three remain today.

Baboo codeshares extensively, with Switzerland’s Darwin Airline, also Air France (CityJet), Alitalia Compagnia Aerea, Olympic Air and Tarom. In the 2009/10 winter, Baboo was codesharing 98% of its flights with one of its five partners.

The carrier has recorded annual revenues in the order of CHF75 million (EUR55 million) prior to the economic crisis. In 2009 it recorded a 30% year-on-year increase in revenue to EUR49.6 million, reflecting a 38% increase in passenger numbers to 406,000.

Routes cut and 40% of staff axed

However, for the past two years it has been losing money heavily (it is believed to have never made a profit) and in Sep-2010 announced plans to cut routes and staff, restructuring to focus on its most profitable routes. It discontinued the Geneva-Vienna route having previously cancelled those to Milan, Naples, Sofia and Marseille, along with firing 40% of staff and reducing working hours for those remaining, a procedure known as partial employment in Switzerland and by which salaries are topped up with unemployment benefits. The decision was explained as a response to “the economic environment and the environment generally”.

A month later it was suggested Baboo would be returning its E190s to the lessor as a further attempt to make the airline profitable.

The cancellation of the London City-Geneva service, in particular, just as the ski season is about to commence and following the suspension of the Oxford flights, has raised eyebrows. Air France codeshared on the 12, times weekly service, having previously plied the route itself under subsidiary CityJet. For a regional airline routes like this really should be profitable. Even allowing for the financial crisis and its effects on the City of London in 2008/09, a route between one of the world’s major financial centres – and one where bank bonuses are very much back in fashion with many of the recipients ("wharfers" as they are known) living close by London City Airport - and Geneva might reasonably be expected to be replete with business and leisure travellers alike and, according to local sources, often was. Had the schedule been reduced for the winter, that might have been understandable but a complete, and short-notice, cancellation has not won the airline any friends.

Not only that, the LCY route was Baboo’s third best performing city pair (and Athens was the fourth), as evidenced in the chart below. 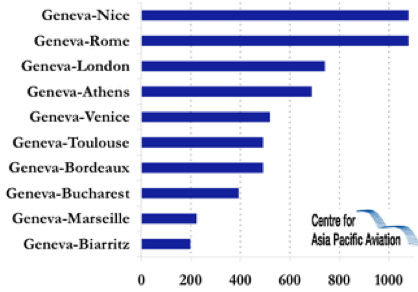 It is not at all clear what has gone wrong at Baboo. As a private company its accounts are not accessible and its public pronouncements are often kept to a minimum, especially where profit and loss is concerned. A reasonable assumption might be that costs were allowed to spiral out of control. And load factors barely above 50% (Jan-Jun 2010) don’t help. Its expansion took place just as the global economic crisis began to bite – an unfortunate case of bad timing - and it was plagued with cancellations and delays on some routes as well as political interference, such as on the proposed St Petersburg route. And of course it is Geneva-based, home of easyJet Switzerland, which offers considerable competition on some of the routes (e.g. Bordeaux, Nice, Rome and Toulouse).

A new CEO was appointed in Apr-2010 to tackle the problems. Mark Darby has worked for Laker Airways, British Caledonian and British Airways, also as a consultant. Latterly, he was CEO at LIAT, the Antigua-based regional airline in the West Indies, which is similar to Baboo in the type of aircraft operated but with a much larger fleet and fundamentally different in the type of route. LIAT is also predominately government owned. It is understood that Mr Darby was brought in to restructure LIAT as well, cutting out some of the fat in that organisation, and to make it profitable but was thwarted by the government owners and the unions who made the position untenable.