With 90 firm orders and three customers behind it, Bombardier confirmed this week that it would move to lock in the design for its new CSeries aircraft during Aug-2010. The key design freeze has been reached following a long joint definition phase with Bombardier’s suppliers. The manufacturer is now confident that the programme, its largest ever, will hit its targets.

As Bombardier locks down final configurations on the 100-145 seat aircraft, it will also be looking to secure more orders for the type. The programme received a boost in early 2010, with an order for 40 from Republic Airways. Since then, order news has been thin, with easyJet and Qatar Airways expressing their interest, as well as a possible purchase by Chinese carriers. Bombardier continues advanced negotiations with a handful of customers and is talking to others.

Airbus and Boeing’s A320 and B737NG narrowbodies have achieved 107 orders between them this year. These aircraft, now well into their third (A320) and second (B737NG) decades of service, are still proving incredibly popular, even in the face of the more fuel efficient CSeries. Even if Airbus and Boeing decide to fit new engines to their aircraft, Bombardier is confident its new aircraft will still have a significant efficiency advantage over the older types. Airbus and Boeing are both projecting narrowbody replacement timelines beyond 2025. 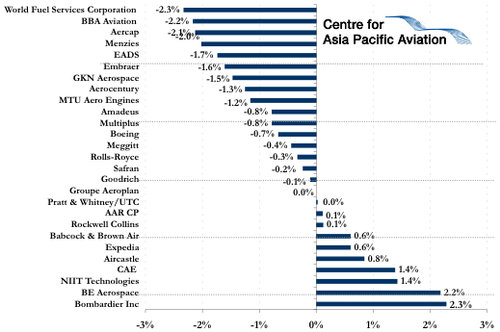