Canadian aircraft manufacturer Bombardier saw 2009 aircraft deliveries down by more than 10% for the year to 31-Jan-2010, and expects deliveries to be cut by double-digit levels in the current fiscal year for both business and commercial aircraft.

Deliveries for the full year totalled 302 aircraft. Bombardier expects to make the majority of its 2010/11 deliveries in the last three quarters of the fiscal year, due to production rate reductions announced in 2009 and the delay in the certification and entry into service of the new CRJ1000 aircraft to the second half of fiscal year 2011.

Bombardier plans to cut commercial aircraft production rates by 20% in FY2010/11, taking a cautious approach to the new year due to prevailing economic uncertainty. Business aircraft deliveries will be down by another 15%.

FY2008/09 was a poor year for its business aircraft unit, with Bombardier reporting a net total of 85 cancellations during the year. Offsetting this was relatively better ordering for commercial aircraft, with 22 CRJS, 16 Q400s and 50 of the new CSeries ordered by airlines and leasing companies over the financial year.

Overall, the company booked 11 net orders, compared to 367 in the previous year.

The next 12 months will prove crucial for Bombardier Aerospace. There is the ongoing war of words over competition and aircraft financing with Airbus and Boeing and an OECD agreement on export credit backing to support ordering to be made by the end of the year. In addition, Airbus and Boeing could potentially announce new engines for their respective narrowbody platforms, damaging the attractiveness of Bombardier’s new CSeries, due to enter service in 2013.

The delay to the 100-seat CRJ1000, primarily due to problems with flight control software, is an inconvenience, as the company had hoped to commence deliveries by Apr-2010. There are currently just 35 firm orders for the aircraft.

More worrying is the future of the CSeries. The aircraft is Bombardier’s first attempt to play in the same market as Airbus and Boeing, but it has not yet drawn strong ordering. Just 50 aircraft, from two customers, are on the books, and the current weak ordering outlook stretches out to 2011/2012, according to Airbus and Boeing.

If Boeing and Airbus do re-engine their narrowbodies, as they appear increasingly likely to do, Bombardier’s commercial aircraft order backlog of just 223 aircraft (about two year’s production) could look increasingly thin. Bombardier expects the tough ordering environment to continue for some time. 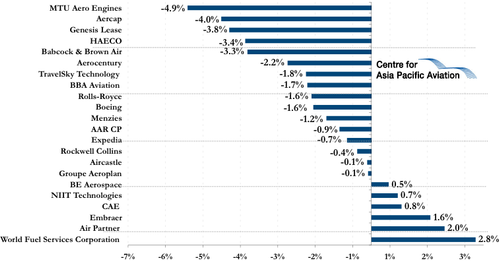