Bombardier reported a USD225 million decline in net revenue in 1Q2010, as revenue from commercial aircraft dropped by CAD301 million, a decline of nearly 50% year-on-year. Net profit was USD153 million, a marginal decrease on the USD158 million earned in 1Q2009. The result, in a difficult climate for the manufacturer, sent Bombardier’s shares up 4.8% in trading yesterday.

Net revenue was USD4.2 billion, down from the USD4.5 billion reported in the first quarter last year. The company reported a strong cash position of USD3.5 billion and a total backlog valued at USD44.4 billion, up from the USD43.8 billion on 31-Jan-2010.

President and CEO of Bombardier, Pierre Beaudoin, noted that the business and commercial aircraft units “performed well given the current economic context”. Key indicators in business jet market are showing signs of stabilisation, according to the Bombardier head, with the level of business aircraft cancellations decreasing. Bombardier reports that lower deliveries and selling prices of business aircraft have been partially offset by a more favourable product mix.

The group received 61 net orders in 1Q2010, compared with nine for the same period last fiscal year. 55 of these were for commercial aircraft.

The manufacturer’s commercial aircraft unit benefited from a “breakthrough order” for the company’s new CSeries aircraft, with Republic Airways ordering 40 aircraft, as well as 40 options, early in the year. The group also received an order for 15 Q400 turboprops, with options for 15 others from Jazz Air, as well as a firm order for three CRJ900 NextGen regional jets with options for an additional six from Pluna. There were three commercial aircraft order cancellations in the period.

Revenues down on lower deliveries, margins up

The manufacturer delivered just 16 commercial aircraft in 1Q2010 compared with 31 aircraft in 1Q2009. Regional jet production in particular has suffered, with just four CRJ900s delivered in the three-month period, compared with 15 regional jet deliveries in the same quarter in 2009. As of 30-Apr-2010 commercial aircraft production backlogs are at 17 months for the Q400s and 25 months for the CRJs, giving the company leeway in production rate decisions.

No changes to aircraft production

No changes to commercial aircraft the production rates are anticipated and the company has been able to postpone the decision to reduce commercial rates after it gained a three-aircraft CRJ900 order from South American carrier, Pluna. It is also working on a few more campaigns on which decisions were imminent and will use those outcomes to guide its production rate. The Q400 has a “good” long-term outlook with “tail winds” expected during 2H2010.

Bombardier confirmed it has now locked up 99% of all suppliers for the CSeries. It will move from the joint definition phase (JDP) to the detailed design phase (DDP) by the end of 2Q2010. The company is also discussing the CSeries with more than 60 customers but noted only a "handful" were in the advanced stage. Announcements are expected in the next few months.

The CSeries is still three-and-a-half years out from service entry, which gives customers time to make up their minds as to which aircraft to pursue, according to Bombardier. Mr Hachey noted that many customers are sitting on the sidelines because of the financial situation and are seeing how the recovery proceeds.

Bombardier expects the CSeries to add USD5 billion to USD8 billion to annual sales. It has revealed no new information on Boeing and Airbus plans to fit new engines to their existing narrowbodies, a decision which could weigh heavily on the success of the CSeries.

However, the company remains confident that re-engining existing airframes will prove less efficient than the clean-sheet CSeries. The company is betting on the promised 20% reduction in fuel burn and 15% decline in operating costs. It is, however, running up against the 737-600/700 and the A318/319, neither of which have been barn burners when it comes to sales. US regional market changes drive jet vs turboprop debate

Bombardier also reported that business at Flexjet is picking up with profitability achieved in the first quarter. It noted that most customers to the fractional ownership business had used the aircraft below contract levels but are now flying to contract capacity. Mr Hachey noted that business jet utilisation in the US went up 17% in the first quarter, according to the Federal Aviation Administration, which was the fourth consecutive quarter for increasing business jet demand. He also reported increasing demand for jet cards.

Although the aerospace industry continues to experience challenging conditions, the business aircraft market has increased fleet activity and decreases the number of pre-owned aircraft. The last General Aviation Manufacturers Association (GAMA) shipment report shows Bombardier Aerospace continued to be the market leader in both revenues and units delivered during the first three months of calendar year 2010.

For 1Q2010, EBIT reached USD89 million, or 4.6% of revenues, compared with USD110 million, or 5%, for the same period the previous year. The 0.4 percentage-point decrease was mainly due to higher cost of sales per unit, on price escalations of materials, lower selling prices for business aircraft, a net negative variance on financial instruments carried at fair value, and lower absorption of selling, general and administrative expenses. The decrease was partially offset by a favourable mix between business and commercial aircraft deliveries, lower write-downs of pre-owned business aircraft inventories, lower amortization expenses and the better prices for commercial aircraft.

Free cash flow usage totaled USD205 million for the first quarter, compared to a usage of USD530 million for the same period last fiscal year. The USD325-million improvement was mainly due to a positive period-over-period variation in net change in non-cash balances related to operations, partially offset by higher net additions to property, plant and equipment and intangible assets and a lower earnings before EBITDA.

Net financing expense amounted to USD28 million for the first quarter of fiscal year 2011 compared with USD33 million for the corresponding period last fiscal year. The USD5-million decrease for the three-month period is mainly due to a gain of USD15 million on long-term debt repayments in connection with our refinancing plan, partially offset by lower interest income on cash and cash equivalents, consistent with lower variable interest rates. 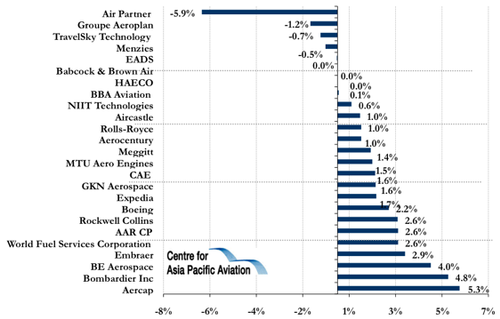