The manufacturer took the downturn “as an opportunity to fine-tune the way we operate, in order to execute better and cut costs intelligently”, said President and CEO, Pierre Beaudoin.

In Mar-2010, Bombardier issued CAD1.5 billion of unsecured long-term debt maturing in calendar years 2018 and 2020. The proceeds are intended to be used to repurchase approximately CAD1 billion of existing long-term debt maturing from calendar years 2012 to 2014, thus extending Bombardier’s debt maturity profile. The balance of approximately CAD500 million will be used for general corporate purposes.

Bombardier stated the development of new aircraft programmes is “evolving as planned”.  Flight testing on the CRJ1000 NextGen aircraft resumed in Feb-2010 and its entry into service is scheduled for 2H2010. The CSeries’ Complete Integrated Aircraft Test Area (CIASTA) systems testing facility in Mirabel (Canada) and the wing-manufacturing facility in Belfast are also under construction.

In Feb-2010, Republic Airways signed an agreement to purchase 40 CSeries CS300 aircraft, with options for an additional 40 CS300 aircraft. The value of this contract, based on list price, is USD3.1 billion which could increase to USD6.3 billion if all options are exercised. Including this order, the backlog for the CSeries family of aircraft now stands at 90 firm orders.

Meanwhile, Pluna (a Uruguay-based regional airline) confirmed the purchase of another seven CRJ 900s at a cost of "nearly" USD200 million, which will bring its total fleet to 14 of the type. Pluna will receive three aircraft this year, adding to its existing seven CRJ 900s already in operation, with the remaining four aircraft to be delivered in 2011.

It is the company’s clearest indication yet that a new product is in the works. The market is ready for a new generation airliner – especially at the lower end of the Boeing and Airbus range with pressure mounting on both the mainline OEMs, as well as traditional regional airline manufacturers, to develop new programs. Adding to the mix are program offerings from Russia, China and Japan.

Boeing and Airbus have both put off the next step change in narrowbodies until the middle of the next decade. However, the market is exerting pressure for a solution before then. The pressure paves the way for successful introduction of the Bombardier CSeries which certainly has the market buzzing.

Thus Embraer’s moves signal its re-engagement on the commercial side after introducing no less than seven business jets during the decade and largely achieving its goal to become a major player in that field. In the past few years, the company has expressed less enthusiasm for developing a new airliner, preferring instead to wait for new engine developments and a clearer message from the market as to what is wanted.

The changes in senior management are effective immediately, said the company, adding the move was designed to “enhance its ability to assure full customer satisfaction and expand its business dynamics, while reinforcing the strength and productivity of its internal operations.”

Elsewhere in the aviation supply chain, lessor AerCap yesterday announced it has signed a corporate debt facility agreement for USD120 million with UBS as lead arranger. The facility has a term of five years and will be used for general corporate purposes.

Paul Rofe, Group Treasurer of AerCap stated, “with this corporate facility from UBS we have further diversified our sources of capital. This facility provides financing for general corporate purposes and allows AerCap to pursue additional investment opportunities. With the conclusion of this facility we have now closed USD350 million of new debt in 2010 which brings the total amount of debt accessed by us in the last 24 months to USD5.3 billion”. 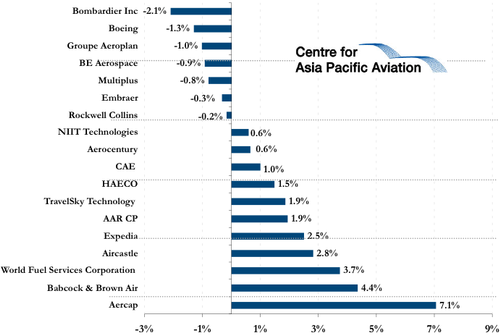