Bombardier shares rose 3.1% on Friday after Lufthansa announced an order for eight CRJ900 regional jets. The order is a boost for the CRJ programme, in which Bombardier has been striving hard to keep production up and avoid cutting more staff in Montreal.

Meanwhile, Airbus announced it has delivered 250 aircraft over the first six months of 2010. The manufacturer, the main operating unit of EADS, expects full-year deliveries to be slightly more than the 483 it delivered in 2009.

Airbus expects more ordering in the second half of the year, although it is expected to be well behind deliveries. The Farnborough Air Show, in mid-Jul-2010, will be a key bellwether.

EADS shares were down 3.6% in trading on Friday. 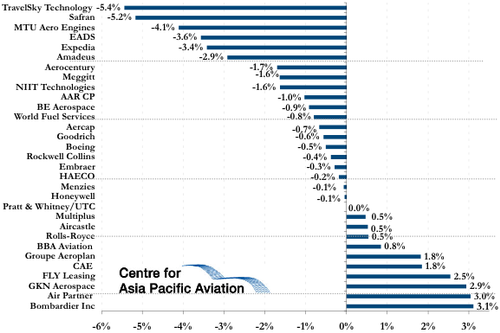