2015 is looming as a critical year for Bombardier and its new CSeries aircraft and it will have to face it without a key aircraft sales executive. Raymond Jones, the company’s senior vice VP of global sales, marketing and asset management for Bombardier Commercial Aircraft, has left the company.

According to Bombardier, Mr Jones departure was for “personal reasons”. A seasoned veteran, he worked for Bombardier for a decade before assuming the lead commercial aircraft sales role in Dec-2013, replacing Chet Fuller.

A successor has not been named. Bombardier’s commercial aircraft sales executives will report to Bombardier Aerospace president Mike Arcamone in the interim.

Bombardier is betting heavily on the success of the CSeries, and another round of changes to its sales team is inevitably problematic for it.

At 110-150 seats, the aircraft is the largest Bombardier has ever produced and also its first all new commercial design. The highly successful Q400 turboprop traces its roots back three decades to the de Havilland Canada Dash 8, while the CRJ regional jet family is an ancestor of the even older Canadair’s Challenger business jet design.

The CSeries is also the most expensive aerospace project Bombardier has embarked on. The original projected development cost were USD3.5-3.9 billion. This has already blown out to better than USD4.5 billion, with another 12 months left in its development and testing programme.

Bombardier is attempting to manage its liquidity position, but the recent downturn in its aerospace deliveries has only exacerbated the problem of the CSeries’ drawn out development and testing programme, as well as the delay in getting it into the hands of customers. Any delay to the programme would only exacerbate these problems.

The CSeries is pushing into exalted company

The CSeries has pushed Bombardier into the lower reaches of the territory occupied by Airbus and Bombardier, dangerous territory for a smaller manufacturer. Bombardier’s 2008 move to launch the new aircraft forced the established manufacturers to re-engine their narrowbody programmes, with Airbus announcing the A320neo in late 2010 and Boeing following suit with the 737 MAX in 2011.

Between them, these aircraft have captured more than 8700 firm orders over the last four years, an unprecedented sales success. In comparison, the CSeries, battling scepticism and large installed fleet bases, has won firm orders for just 243 aircraft since 2008. 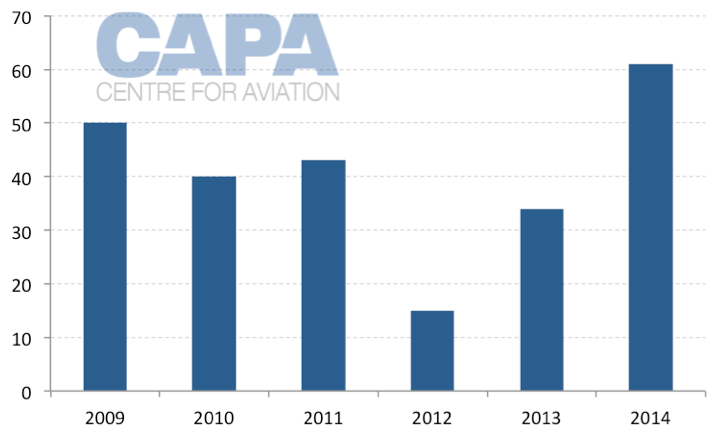 Testing is gradually revealing the CSeries to be an excellent aircraft, but it sits in space that has been vacated by most airlines. Airbus and Boeing have found that their customers are increasingly opting for narrowbodies in the 170-220 seat range, thanks to the opportunities to increase capacity and reduce unit costs that the larger aircraft offer.

And other competition is emerging

Performance alone may not be enough for the CSeries. Russia, Japan and China have developed their own regional jet programmes and are encouraging domestic carriers to purchase these domestic designs, partially locking Bombardier out of several potentially very large markets. Embraer’s second generation of E-Jets, although smaller and not an all new design, also cover some of the same ground as the CSeries, adding to the competitive landscape. 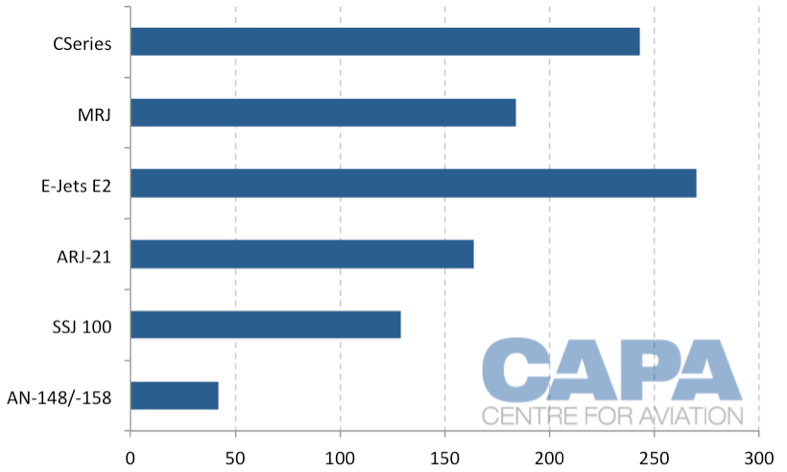 The first CS100 is due to be delivered to its launch customer, as yet unidentified, before the end of 2015. The CS300, which accounts for 75% of CSeries orders, is due to enter around six months later. The first CS300, the larger of the two aircraft family, is due to make its maiden test flight early in 2015.

Malmo Aviation, owned by Sweden's Braathens Aviation, had been set as the CSeries launch customer. However, in Sep-2014, it dropped out from the position. Ominously, the carrier commented that due to “increased uncertainty” it was discussing other possible changes to the aircraft delivery schedule with Bombardier.

Bombardier has had its best year to date for CSeries sales in 2014 – registering 61 orders. But the programme also a suffered some major setbacks.

Setbacks, not all of Bombardier's making, have made the sale process harder

In Jan-2014, Bombardier announced a nine-month delay for the aircraft, citing supplier issues, design updates and the slowness of its flight testing programme. This pushed back the planned for entry into service into 2H2015, around two years later than the original Dec-2013 target set by Bombardier - although there have been considerably worse delays in delivery of a new type.

At the same time, Bombardier announced 1700 layoffs, mostly in its business jets segment, but also across commercial aerospace. The cuts were “specifically targeted at cost containment”, triggered by weakness in luxury jet sales, as well as Bombardier’s own slowing commercial aircraft deliveries and aerospace project delays.

In May-2014, the CSeries test fleet suffered a 100-day grounding, due to an uncontained failure of one of the PW1500G engines during stationary testing. At this point, the programme had accumulated just 330 of the projected 2,440 hours of flight testing needed for certification. Bombardier and Pratt & Whitney devised a fix for the engine oil system - a seal identified as the culprit - but test flights did not resume until Sep-2014, a significant delay.

In Jul-2014, Bombardier announced a restructuring and further housecleaning of its aerospace business. Bombardier Aerospace president and CEO Guy Hachey left. Mr Hachey had been one of the driving forces behind the CSeries, alongside group CEO Pierre Beaudoin. Ross Mitchell, a long-time Bombardier executive, took over the role of VP of business acquisitions, replacing Philippe Poutissou, who was VP of marketing for Bombardier Commercial Aircraft.

The reorganisation is also due to trim Bombardier Aerospace headcount by around 1,800 employees, most of which have now been completed, saving an estimated CAD200 million p/a. The aerospace unit was divided into four segments: commercial aircraft, business aircraft, transportation and a new aerostructures and engineering services business. The new business structure came into effect at the beginning of 2015.

End of year 2015 target will be a challenge

First delivery before the end of the calendar year 2015 is an ambitious goal for the company - but is just possible. With four test aircraft flying and a fifth due to join them early this year, the necessary hours are now being logged. Bombardier needs to manage around 150-160 flight hours per month if it is to meet its goals. A decision on whether flight testing hours could be curtailed will be made around mid-year.

The testing that has been performed has shown the aircraft to be delivering on Bombardier’s performance expectations, even over-delivering in some areas, according to the manufacturer. As testing progresses and more numbers become available, Bombardier has found discussions with potential customers are solidifying. Bombardier is clearly hopeful that as more information is gathered and more aircraft are flying, order momentum will build.

It will be no minor achievement if Bombardier gets the CSeries to customers before the end of 2015. New aircraft programmes have a history of being delayed – as Boeing and Airbus experienced with the 787 and A350.

For Bombardier, with less resources and a smaller portfolio to fall back on, it is even more important to get the CSeries right.