Boeing's 747 aircraft fleet: the original jumbo, overtaken by the 777

In Mar-2018 the Boeing 747 finally lost its crown as the world's most successful widebody aircraft by the number of deliveries, when it was overtaken by Boeing's 777.

The 747 made aviation history when it entered service with Pan Am in 1970 as the first ever twin aisle aircraft and the first commercial jet with two decks. The 747 was also the biggest commercial jet by seat capacity for 37 years from its entry into service until the Airbus A380 surpassed it in 2007.

It is testament to the 747's eminence that it is still in production 52 years after the first order in 1966, even if today's 747-8 variant shares little apart from outward appearance with its original 747-100 incarnation. It has outlasted many rival widebodies and production looks set to continue at least until 2022.

However, production is now focused mainly on the freighter version, and outstanding orders add up to only a fraction of the backlog for Boeing's 777 and 787 and Airbus' A350 and A330neo programmes. Jumbo the Elephant popularised the term 'jumbo' in the nineteenth century as a description of anything large. Today it is almost synonymous with the 747, underlining the iconic status of the only commercial jet with a popular nickname.

As of 23-Apr-2018, a total of 1,544 Boeing 747 aircraft have been delivered. Until Mar-2018, this made it the most successful widebody jet of all time, ranked by the cumulative number of aircraft delivered.

This indicates that the 747 will be pushed down into third place behind both the 777 and the A330 in the next two to three years.

The 747 was very soon operating under the colours of major airlines in all three of the world's big aviation regions.

The most successful variant, the 747-400, began its operational life with Northwest Airlines in Jan-1989.

A total of 724 aircraft of this variant have been delivered, just over half of the total for all 747s to date.

The final -400 delivery, a freighter, was to Kuwait's LoadAir Cargo in Nov-2009 and the final few years of deliveries were dominated by freighter versions. The last 747-400 passenger delivery was to China Airlines in Apr-2005.

Boeing's newest variant, the 747-8, first entered service with Cargolux in Oct-2011, in the freighter version. Lufthansa was the first airline to operate the passenger version, in Apr-2012.

More than half of these, 282 of them (or 56%), are freighter versions, while 212 are passenger jets (including corporate/government and similar) and 11 are combi versions (passenger and freighter combinations).

This concentration of freighters among the currently active 747 fleet is much higher than the freighter share of 40% of all 747s that have ever been delivered, reflecting the trend for cargo aircraft to have longer economic lives. 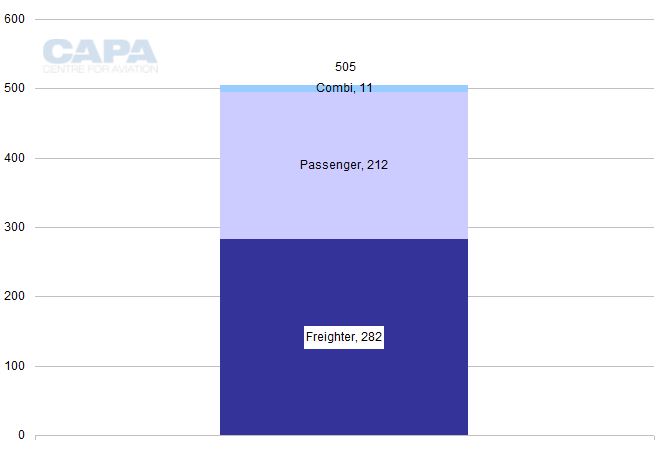 The 747-400 still dominates the active fleet 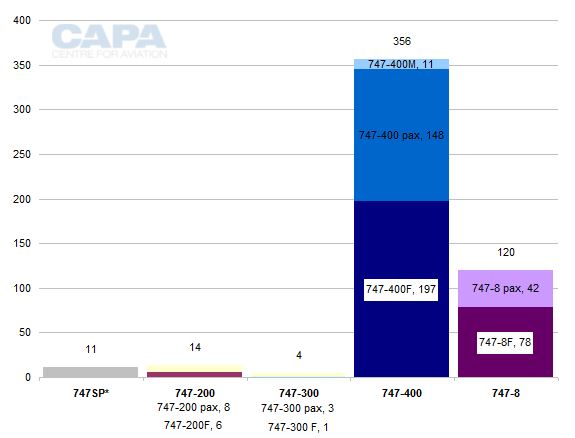 Europe is the biggest region for 747s in service 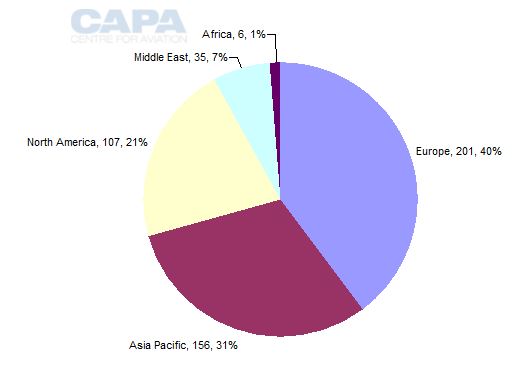 The CAPA Fleet Database lists 79 current operators of 747 aircraft in service, of which 19 have only one aircraft, 34 have just two and the remaining 42 have at least three aircraft. 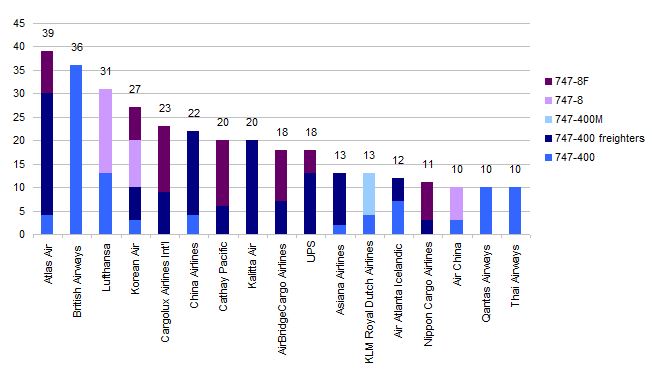 Lufthansa, Korean Air, Cargolux and Cathay are the leading 747-8 operators

Among the airlines operating the 120 Boeing 747-8 aircraft that are in service at 23-Apr-2018, the leader is Lufthansa (18 aircraft), followed by Korean Air (17), Cargolux International and Cathay Pacific (14 each). 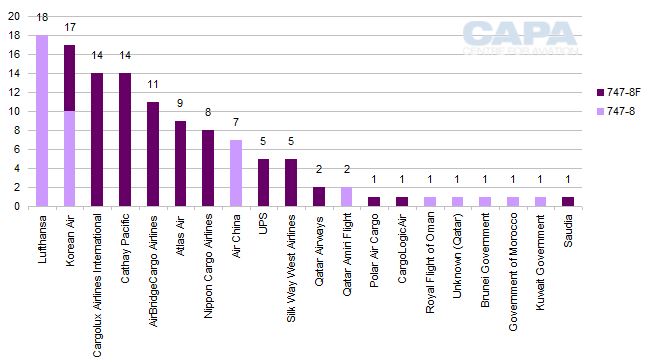 The Boeing 747's place in aviation history is assured

With Airbus also struggling to make a big splash with its A380 (107 on order, of which 60 for Emirates), the era of four-engined double-decker aircraft appears to be fading.

For both manufacturers the focus is on newer technology versions of existing single-decked twin engine jets (Boeing's 777-8 and 777-9, Airbus' A330neo) and their recently introduced new twin engine widebody models (the 787 and A350).

Jumbo the Elephant was sold by London Zoo to Barnum & Bailey Circus in 1882, before meeting an untimely death in Ontario in 1885 after being struck by a freight train. The later stages of the 747's life are also closely linked to freight transport, but the jumbo jet seems assured of a more dignified elephant's graveyard when its time eventually comes.

Its glory days may be over, but the Boeing 747's place in aviation history is assured.