Boeing to update on B787, Babcock & Brown and BBA Aviation trade up strongly – Supplier Share Wrap

Boeing gained 3.4% in trading yesterday, after some good news (of a sort) emerged regarding the B787 programme. However, the company’s share price has dipped 16.5% since early June and any reversal of Boeing’s overall share slump over the past few months is going to require definite and visible progress on the B787.

Despite rumblings from suppliers about delays and a lack of information, Boeing’s chief engineer stated yesterday that the company is “just weeks away” from announcing a new test flight date and delivery schedule for the 787. While it is something of an indication of progress, such a nebulous timeframe also indicates Boeing’s uncertainty about exactly how long it is going to take before it can put the B787 into the air. Boeing has already committed to announcing the revised flight test and delivery schedule by the end 3Q2009.

Engineers are now reportedly preparing to install a fix for the wing box problem on the B787 static test airframe, but when the fix will be applied to the first aircraft due to fly (ZA001) remains to be seen. Supplier speculation has been that Boeing will push the first flight back to late 2009/early 2010, which may mean that the first B787 may not be delivered to airlines until 4Q2010 or 1Q2011.

Babcock & Brown Air (B&B Air) jumped 9.1% in trading on Thursday, with the company announcing a net profit of USD14 million in 2Q2009, a “significant improvement” over results in the same period last year. 1H2009 results were even better: a net profit of USD60.9 million, compared to USD22.7 million in 1H2008.

However CEO, Colm Barrington, has urged caution for the second half of 2009. He remains concerned about the lack of a meaningful recovery reported by airlines, and anticipates that 3Q2009 passenger statistics will show ongoing weakness.

B&B Air will “continue to monitor its lessees very carefully”, with airlines facing liquidity problems as a result of the current decline in global air traffic and yields. The company’s aircraft portfolio continues to perform well, with all but one aircraft on lease during 2Q2009, but it remains concerned that airlines generally have been unable to build up liquidity levels over the traditionally strong Summer period.

The company expects lease rates to decline approximately 10-15% from current levels in 2010. It is also seeing longer periods to remarket aircraft, resulting in greater downtime between leases when aircraft will not be generating revenue.

The leasing business is in “a state of flux” with several peer leasing companies, including ILFC and CIT Aerospace, up for sale, potentially at distressed prices, although mostly due to factors unrelated to business performance and core operating activities. B&B Air expects this divestment activity will introduce more uncertainty into the sector, but will also create aircraft investment opportunities.

BBA Aviation’s share price gained 4.6% yesterday, after the company announced a minor reduction in 1H2009 revenue (-2% to GBP550.2 million) and a 12% fall in underlying pretax profit to GBP38.4 million. Operating profit fell 2%, to GBP50.6 million. The results were generally in line or ahead of the company’s expectations.

The company has seen “stablisation in the majority of our markets in recent months”, although it is still challenged by short-term volatility. To offset this, the company is increasing its cost cutting initiatives, aiming to reduced costs by GBP30 million p/a. It will focus on cash generation and debt reduction, having cut debt by 20% to GBP448.6 million over 1H2009.

BBA maintained its dividend at GBP2.30. 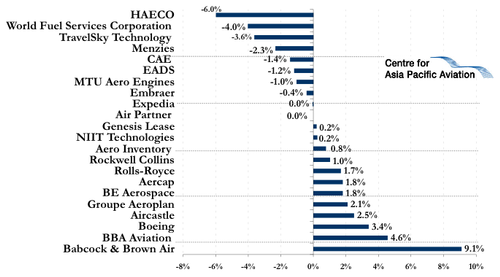