Boeing Commercial Airplanes VP Middle East and Africa Martin Bentrott stated Boeing has delivered 17 aircraft to Middle East customers so far in 2010. It includes five via leasing companies – through GECAS and Babcock and Brown there were two B77-300ERs to Egyptair and three B737-800s to flydubai – in addition to three B777-300ERs to Emirates and eight B777s to Qatar Airways.

Boeing plans to deliver an additional 13 aircraft in 2010 to customers in the Middle East: five ALAFCO B737-800s, four flydubai B737-800s (including the first new Boeing Sky interior), two Qatar Airways B777-300ERs and two DAE B737-800s. Mr Bentrott added that the Middle East is home to an estimated 446 Boeing aircraft that represent every single type of jetliner constructed by the manufacturer from the 1960s to date. The manufacturer currently has a backlog including 48 aircraft for Emirates, 45 for Etihad, two aircraft from Qatar Airways and three for Royal Jordanian (-0.6%). 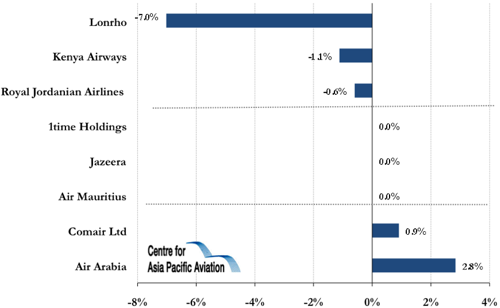