Boeing suggest B737 replacement will be modestly larger

Boeing has released more hints on the likely shape of its B737NG successor, confirming it will stay with a narrowbody platform that will be "modestly bigger" than the existing aircraft. The B737NG family ranges in capacity from around 110 seats on the B737-600 all they way up to 210 seats on B737-900ER in a high-density configuration.

Boeing Chairman and CEO Jim McNerney reaffirmed Boeing’s preference for developing a new aircraft but the company will retain the option of revamping the B737NG with new engines, if plans for the development of an all-new aircraft are not in place by 2012. Mr McNerney also dismissed the possibility of developing a narrowbody to fill the gap left by the discontinued B757, a niche that some analysts have suggested could be filled by Airbus' A321neo.

Boeing stated a decision on the future of the narrowbody aircraft programme is now more likely to occur towards the end of 2011 and is unlikely to make an announcement at the Paris Air Show, being held in late Jun-2011.

Boeing Chief Financial Officer James Bell stated once the manufacturer begins B787 deliveries it will see a “significant improvement” in cash flow. The company is targetting a net income margin of 7%, though “it will take a little time” to meet the target. In 2010, Boeing’s net margin was 5.1%. B747-8 deliveries are also due to commence this year.

Airbus CEO Tom Enders has announced the manufacturer still intends to deliver around 25 A830s in 2011, despite the issues suffered by Rolls-Royce as it recovers from problems with the Trent 900. Airbus is still working to eliminate lingering production issues with the aircraft, despite having manufactured 50 of the aircraft. Airbus delivered its 10th A380 of the year to Korean Airlines. It plans to delivery four more to the carrier before the end of the year. 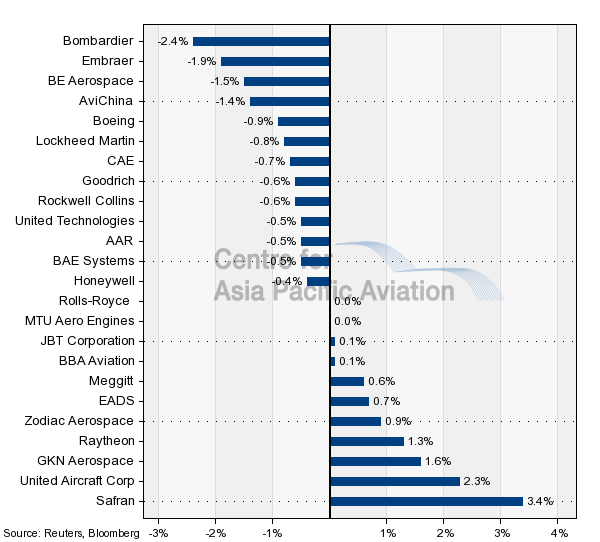