Boeing officially opened its South Carolina B787 second assembly line on Friday, to the background of more controversy over its relationship with unions. Later this week, US National Labour Relations Board will begin hearings against the US manufacturer, claiming the company specifically cited the new plant in South Carolina as retaliation against union unrest in Washington State. South Carolina is one of the 22 US states with right-to-work legislation, forbidding compulsory unionisation of its workforce.

The NLRB case comes as the Society of Professional Engineering Employees in Aerospace, representing nearly 22,000 workers at the manufacturer, called for binding binary interest arbitration for two major contracts that are due to expire over the next two years. The first, with 600 engineers in Kansas, expires in Dec-2011, while the second, expiring in Oct-2012, covers 21,000 workers and engineers at the company.

According to SPEEA, Boeing’s change in attitude and reversal of some outsourcing and labour policies since 2008 negotiations creates a much more harmonious platform to negotiate. The union believes it can pursue a collective bargaining model with the carrier that eliminates the need for industrial action, and retaliation from Boeing. Under a binary arbitration, the arbitrator selects the proposal presented by one side, rather than a compromise cobbled together from either sides’ positions.

While Boeing may be under pressure over its South Carolina B787 facility, the aircraft programme is finally about to enter commercial service, after more than three years of delays. Launch customer All Nippon Airways first B787 flight crews complete their training earlier this month, as the airline has repeated its belief that the first aircraft will be delivered in August or September.

Just as importantly, the slowly shrinking B787 order book may finally start to show some life again, after several years characterised mostly by order cancellations. Air France-KLM is reportedly preparing to split its widebody fleet replacement order – potentially covering 100 aircraft and another 100 options – between the B787 and its Airbus competitor, the A350. The new leasing company Air Lease Corporation has also confirmed it has made a widebody order, with details to come at this month’s Paris Air Show.

Shares in Boeing were down 2%, on a cool day for aerospace shares as global markets fell. 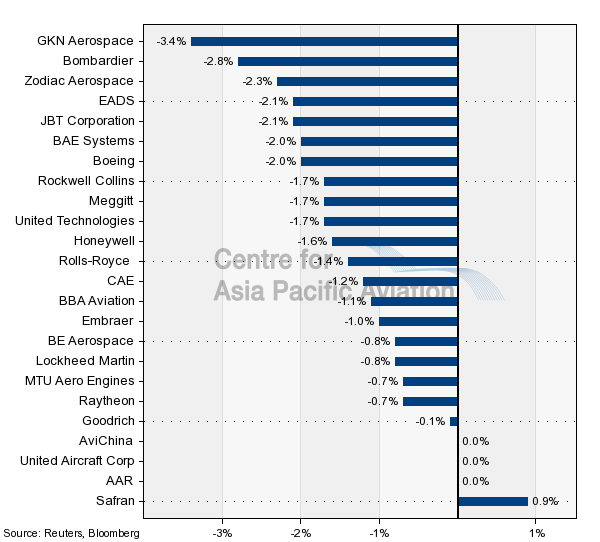