Shares in Brazilian aircraft manufacturer, Embraer, have rallied amid a stronger local market and speculation by investors that the company will have a better second half of the year, as it continues to cut costs and enhance efficiency.

While Embraer’s overall outlook is still somewhat depressed, having revised expectations downwards several times earlier in the year, the company is seeing the first signs of a recovery in the business aviation market and its profit in 2Q2009 beat market expectations. Embraer rose 5.4% yesterday, to finish the day at BZR10.79, a three-month high.

Boeing's shares slid 2.0% yesterday, despite good news from its Defence unit of a USD1.15 billion order for military helicopters from the Canadian Government. Boeing stated it would match the value of Canadian Government spending on the helicopter with partnerships and contracts with Canadian aerospace companies, which could provide a major lift for the local market.

Aircraft lessors reversed the strong gains seen at the end of last week. Babcock & Brown Air lost 5.9% and Aircastle dropped 5.6%, while Genesis Lease lost 2.9%. Aercap proved the exception, up 1.8%. The stock has gained nearly 50% since mid-July. 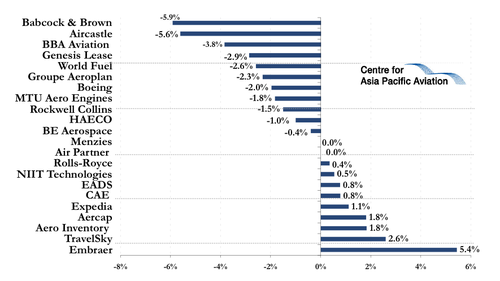