One of the major take-aways from the latest Boeing Current Market Outlook is its prediction about a diminishing role for regional jets. While it sees no drop in mainline aircraft lifespans, it does say the regional jet fleet lifespan may be about 16 years compared with the 23 to 24 years for single and twin-aisle jets.

In addition, it suggests that after rising to 15% of the current fleet, regional jets will constitute only 5% of the fleet by the end of the forecast period and may be eliminated from some regions such as the Middle East where Embraer has had success with its E-Jets.

Regional jets to be 2% of market value 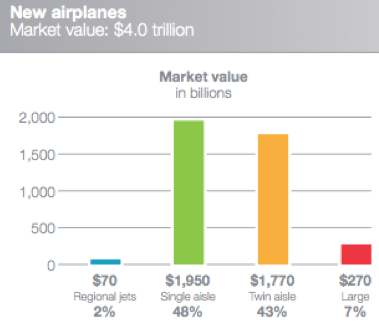 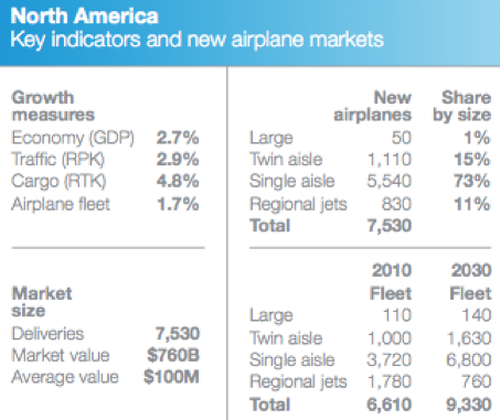 As Boeing said that regional jets will drop from 1780 aircraft in the 2010 fleet to 760 in 2030 - about the same as Delta’s regional fleet is today - it is clear from presentations during the recent Regional Airline Association meeting regional OEMs seriously disagree. 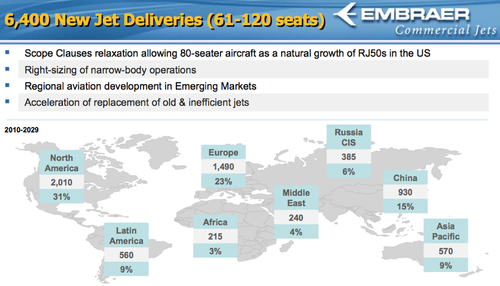 Meanwhile, Bombardier sees a demand for 13,000 aircraft in the 20 to 149-seat market with the sector expecting to generate USD588.6 billion in total revenues. Bombardier Commercial Aircraft President Gary Scott sees a need for 6000 aircraft in the 100 to 149-seat range and is banking that Boeing and Airbus will stay out of the below-150-seat market.

Even so, Airbus points to its robust A320neo order book since its December announcement as forestalling a need for the CSeries. For its part, Bombardier recently announce new orders but its order book remains woefully weak, according to lessors speaking at the International Society of Transport Aircraft Traders who called significant order increases for the CSeries CS100 and CS300 is critical this year. 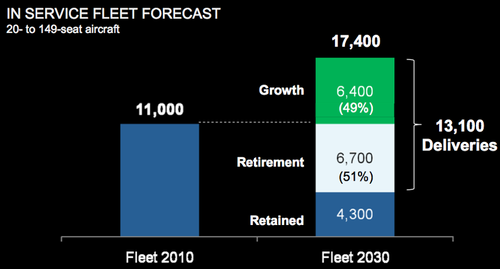 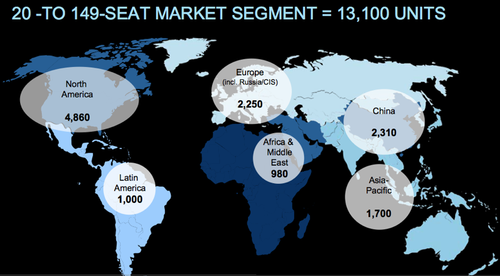 Fleet optimisation with turboprops and jets 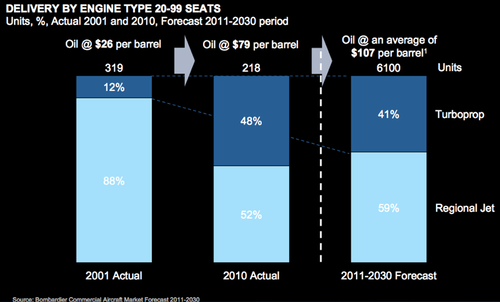 Bombardier’s forecast for smaller aircraft is interesting judging from comments by regional CEOs during the RAA meeting. They cited a growing need to replace the current fleet of Saab 340s, Dash 8s, Cessna 402s and Beech 1900s which are ageing. Such turboprop and piston aircraft represent 2392 aircraft and 120,551 seats in current US regional airline service.

US regional aircraft fleet as of July 2010 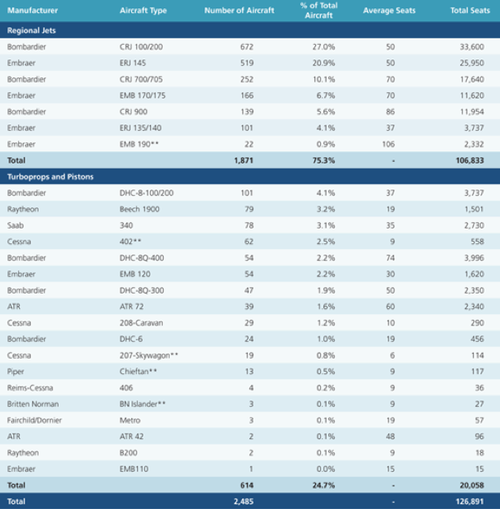 Despite the push from regional airline CEOs, current manufacturers - Bombardier and ATR, along with engine manufacturers GE and Pratt & Whitney Canada - are focussing on the larger end of the regional aircraft market and say there is no market below 50 seats any longer. Indeed, they indicated that used 30 to 50-seat turboprops that came on the market in the mid-1980s will meet the need for replacing aircraft. However, regional airlines are already using the de Havilland Dash 8s/Q200, the Embraer Brasilias and Saab 340/340Bs and still see a need for a new generation of small turboprops to replace current aircraft including the 50-seat regional jets.

What is most interesting about the current crop of turboprop airlines - excluding the ATR 42/72 and the Bombardier Q400 - is the potential for building a new generation regional airline serving markets that have been abandoned as mainlines used regionals to serve larger and larger markets. These abandoned markets used to be lucrative, bread-and-butter markets that served to make the regionals in the 1980s attractive to codesharing opportunities with the majors in the first place.

Numerous questions surround this potential including whether travellers from those abandoned markets have been retrained to drive to low-cost carrier markets. The likelihood is high that east of the Mississippi, they have already found alternatives to their local airports unless there are geographic barriers standing in the way such as the rugged West Virginia mountains. This accounts for the fierce loyalty rural legislators in Washington have for the Essential Air Service programme.

Aircraft such as the Fairchild Metro III, Bandeirante and Twin Otter have long since been replaced by Embraer Brasilias, the Dash 8s and Saab 340s. Indeed the Dash 8s and Brasilias are now scarce, according to the regional CEOs attending the RAA conference in May such as Cape Air and Great Lakes, who continue to rely on the Cessna 402 and the Beech 1900, respectively. West of the Mississippi, the problem is greater because of the long windshield time between regional and low-cost carrier airports so alternatives are harder to come by.

Other questions include whether airline operating costs wrought by the single-level-of-safety regulations in the 1990s and new training requirements imposed in the wake of the 2009 Colgan accident have raised the financial bar too high for what had been pretty lucrative markets during the 1980s through the 1990s. Today, many of these abandoned markets include those once served by regional jets.

Questions also focus on financing in what is now a very tight credit market. Consequently, it is likely regionals will have to continue to make do with last-generation small turboprops until they prove the market potential of a new-generation aircraft.

Turboprops are growing segment of market

Despite predictions a decade ago that turboprops would go the way of the DC-3 in commercial service, both Bombardier and ATR make passionate presentations as to the potential of their 60-plus-seat turboprops during RAA, positing a larger role for turboprops on rising fuel, especially for short-haul markets. ATR noted that turboprops were only 15% of the fleet in 2001 and were now 40% of the fleet. 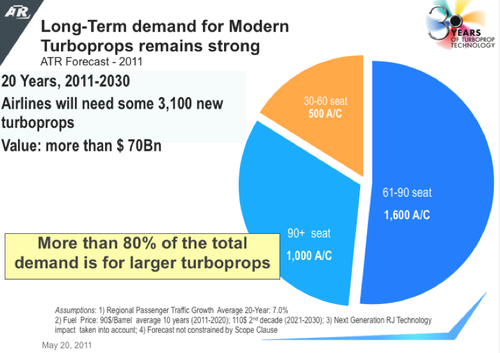 Activity on the regional level is far higher that suggested by Boeing’s forecast as evidenced by aircraft programmes and the needs of the industry, at least expressed by regional executives.

While forecasts are intriguing, Boeing says nothing about the make-up of the OEM universe in 2030 which is more intriguing still, given the programmes coming out of China and Russia at both the regional and mainline levels. Both Boeing and Airbus expect a third mainline airframer to enter the market and Embraer has already stated it is keeping a wary eye of the market suggesting three airframers will be all the industry can take. Regardless, we all know that the worldwide aviation industry in 2030 will be vastly different than it is today. We can only hope that, by then, we will finally have achieved cross-border ownership.