US aircraft manufacturer Boeing has delivered 104 aircraft in 1Q2011, four down from the same period in 2010, mostly due to the cut back in B777 production. Boeing reported 18 new orders this week, 15 B737s from Turkish Airlines and two more B737s and one B777 from an "unidentified customer".

ATR announced an order for 20 ATR 72-500s from UTAir. ATR is a joint venture and equal partnership between Alenia Aeronautica (a Finmeccanica company) and EADS.

EADS unit, Airbus, announced its assembly line for the A320 in Tianjin will deliver 36 A320 aircraft in 2011 to Chinese airlines. Airbus China President Laurence Barron has stated the manufacturer is not worried about the slow pick-up of the A380 by Chinese airlines as they "historically have not been very enthusiastic about buying a product early in the programme" and "it will take some time for the Chinese airlines to really understand what a great aircraft it is". China Southern Airlines is the only Chinese airline to have ordered the A380 so far and has five on order. The carrier expects to take delivery of the first A380 in Aug-2011. EADS shares finished 1.2% higher.

Spirit AeroSystems Holdings announced it intends to commence a public secondary offering of 10.3 million shares of class A common stock. The company will not receive any proceeds from the offering. The shares are being offered primarily by affiliates of Onex Corporation and members of management of the company. Onex is expected to maintain voting control of the company following this offering. Morgan Stanley are acting as underwriters for the offering. The underwriters will have a 30-day option to purchase up to an additional 15% of the offered amount of the class A common stock sold. 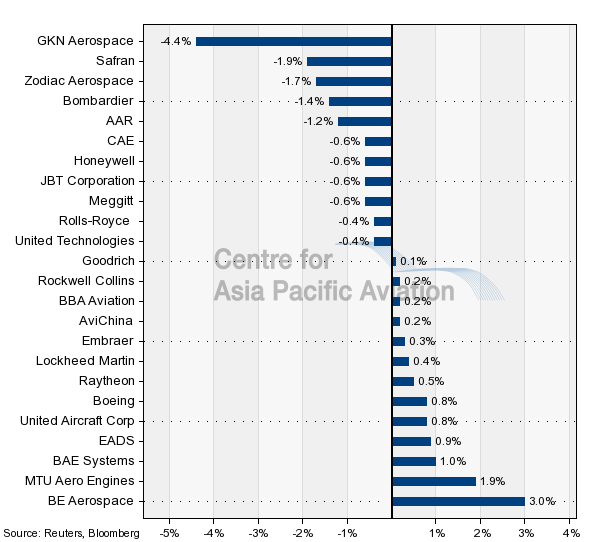