Boeing’s commercial aircraft deliveries for August dropped by almost a quarter, with the US manufacturer delivering 28 aircraft in the month, compared to 36 in the same month last year. The manufacturer has delivered 307 aircraft for the year to the end of Aug-2009.

The vast majority (237) have been B737 narrowbodies, while it has also delivered 56 of its very successful long-range B777 widebody, as well as eight B767s and six B747s. Orders were down too in August, with Boeing reporting 32 orders, compared to 36 in Aug-2009. Most orders last month were for B737s.

For the year to the end of August, Boeing has taken 161 gross and 70 net orders, basically suffering one cancellation for every two new orders. 124 of the 161 gross new orders have been for narrowbodies, with Boeing seeing cancellations for 85 widebodies, including 73 B787 cancellations.

The change-over in top management at Boeing Commercial Aircraft at the beginning of the week has brought some rare admissions from the company. On Monday, Boeing announced that Jim Albaugh would replace Scott Carson as head of the commercial division. While Boeing has expressed renewed confidence at hitting its goal of a maiden B787 test flight before the end of the year, company CEO, Jim McNerney, admits that the manufacturer “lost the handle a little bit” on managing major programmes, and would not take the same outsourcing route adopted for the B787 if given the option again.

McNerney told The Street both Boeing and Airbus have been “somewhat chastened by our reach exceeding our grasp on a number of programs. There have been some lessons around program management discipline, program management baseline and market driven promises that were not fulfilled. At the end of the day, customers value people who deliver, not people who promise."

These lessons on delivery over promises have cost both Boeing and Airbus billions of dollars in delays and penalties, particularly with the fraught B787 and A380 programmes, both of which have run more than 24 months behind initially promised schedules.

More A380 deferrals - this time from the launch customer, SIA

Airbus is still having issues getting A380 production into full swing, although this is something of a happy coincidence for several carriers currently struggling to match capacity with demand. While there have been no recent cancellations for the aircraft, unlike for the B787, more than 50% of A380 deliveries have been deferred, particularly in the Asia Pacific region.

Singapore Airlines, which already operates nine A380s and has two more due this year, has announced an agreement with Airbus to defer the delivery of the 12th to 19th aircraft by six to 12 months.

The move by SIA follows Thai Airways’ announcement in late Aug-2009 that it would defer delivery of its A380s to Dec-2012, after originally lining up to take them in 2010. Qantas recently took delivery of its fourth A380, with three more to come this year, but announced in Apr-2009 that it was delaying deliveries of another four aircraft. Even the aggressive Emirates in the still booming Middle East market has mulled A380 deferrals, and has had to adjust its delivery schedule to cope with Airbus’ production slowness.

Apart from orders and deliveries, both Airbus and Boeing, and their shareholders, will be waiting on tenterhooks for the WTO’s decision on the legality of launch aid supplied by EU governments, reportedly expected today. While the judgement is technically “confidential”, both sides have much at stake, with a second act, the EU case against US support of Boeing, to follow in six months. Both sides have expressed confidence of a ruling in their favour.

EADS, Airbus’ parent, and Boeing were both up 0.1% on Thursday. 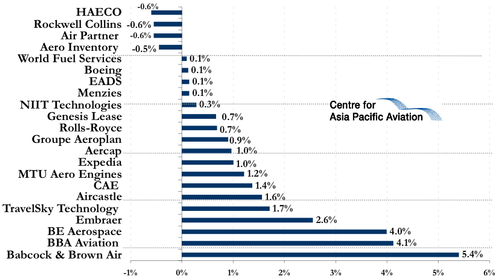