European and US stock markets put in another strong performance yesterday, helping most aviation suppliers to show solid gains at the start of the week. EADS’ share price was 2.4% higher as the company reportedly extended the targets for its ‘Future EADS’, from EUR200 million to EUR300-EUR400 million. The move could signal that EADS’ revenue is suffering more than anticipated due to the recession, but with costs of some EUR35.9 billion in 2008, further efficiencies are possible.

Meanwhile, the UK Government has reportedly agreed to maintain its participation in the troubled A400M military freighter programme, now being run by Airbus military, on the condition of price concessions. Airbus has also announced progress on its latest commercial aircraft, the A330-200F, with final assembly of the first aircraft expected to be completed shortly, ahead of its maiden test flight in November. As Boeing has yet to announce a revised test flight date for the B787, it is possible that the new Airbus freighter could beat Boeings new jet into the air.

Boeing traded up 2.0% yesterday, despite the formal cancellation of a US Army contract for ground vehicles, as the US military enacts cuts under its 2010 budget. Boeing recently announced plans to cut 10,000 workers at its defence units, due to the downturn in US defence spending. 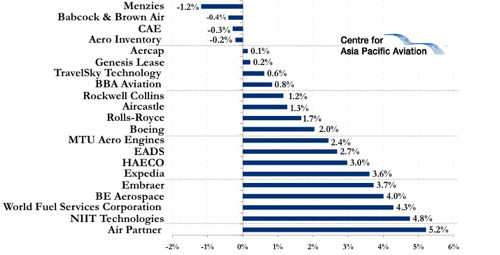