The carrier’s CEO, Calin Rovinescu, stated this week that the airline will continues cost cutting but is now on a more stable footing, and customers and suppliers should have renewed confidence. See related article: Air Canada bailout buys time - but Canada Inc sells out to forces of protectionism

Meanwhile, Canadian simulator manufacturer, CAE, is reportedly expected to reduce its full year order forecast when it announces its 1H2009 results later today. The company has been suffering due to the continued downturn in civil aviation, although its military sales remain “robust”. The company’s share price gained 1.4% yesterday.

Major manufacturers all traded down, with Airbus parent EADS (-2.4%) and Boeing (-0.8%) both losing ground. Rolls-Royce slipped 1.7% after the UK Ministry of Defence announced it would not use the company’s engines for an upcoming fighter procurement. MTU Aero Engines also lost ground, falling 0.6%. 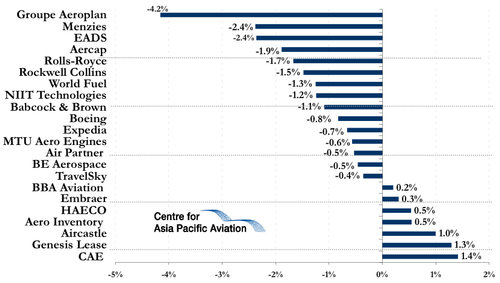