Shares in Boeing and Airbus parent, EADS, rose 3.2% and 3.3%, respectively, on 18-May-2009, as aerospace and related suppliers enjoyed a strong day as global equity markets rallied.

Goldman Sachs upgraded its rating on Boeing from ‘Sell’ to ‘Neutral’ and lifted its price target for Boeing stock from USD30 to USD46. It was trading at USD44.37 at the close of trading yesterday.

Brazilian aircraft manufacturer, Embraer, was among the best performing aviation supplier stocks, up 7.2%, after news that aviation would be a key focus during upcoming trade and investment talks between Brazil and China. Brazil’s President, Luiz Inacio Lula da Silva, reportedly plans to visit the Chinese Aerospace Technology Agency and Embraer recently forecast more orders for approximately 875 aircraft from China over the next 20 years.

B/E Aerospace reported the strongest movement of the day, up 9.2%, hitting a six-month high of USD13.77. The company has climbed from a low of just above USD6.50 per share in early Mar-2009, as investors consider the likelihood of several carriers moving to reconfigure the seating arrangements in their fleets as premium traffic volumes dwindle. 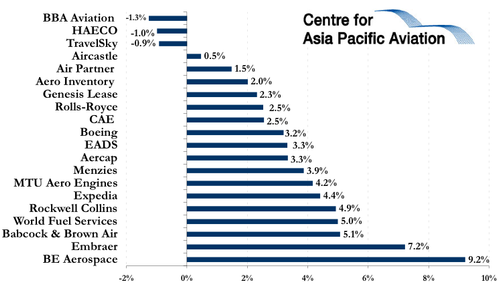 The Centre adds Genesis Lease to its Aviation Suppliers wrap today. The leasing company has a broad spread of more than 30 global airline customers across 19 countries. As of 31-Mar-2009, 50 of its 54 aircraft (93%) were on lease, with the remaining four expected to be delivered to new customers in 2Q2009.

The company’s share price was up 2.3% on 18-May-09, having retreated slightly from a seven-month high of USD5.01 in early May-2009. Genesis reported its 1Q2009 financial results at the end of Apr-2009, with revenue down 6.0% and net profit down 3.0%, to USD9.6 million. The results were boosted by a gain of USD6.2 million related to the repurchase of securitization notes. 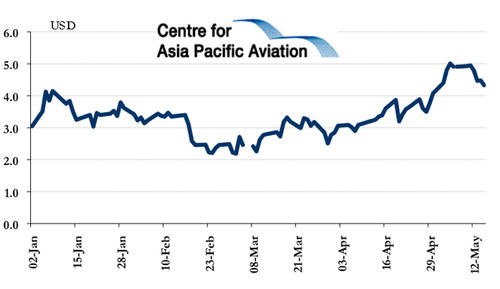