Airport and supplier stocks slumped yesterday, as investor uncertainty rips through global financial markets on the affect the European debt crisis will have on global economic recovery and growth.

Chinese operators, Beijing and Hainan Meilan dropped the most (-7.4% and -6.8% respectively).

There was much activity at Hainan Meilan International Airport yesterday, with the company nominating Mr Feng Da’an as candidate for appointment as an independent non-executive director to replace Mr Xie Zhuang, whose term of service expires on 06-Jun-2010. Mr Zhang Han’an was nominated to be re-elected as non-executive director of the Company and Mr Zhang Shusheng also nominated to be re-elected as supervisor of the Company. 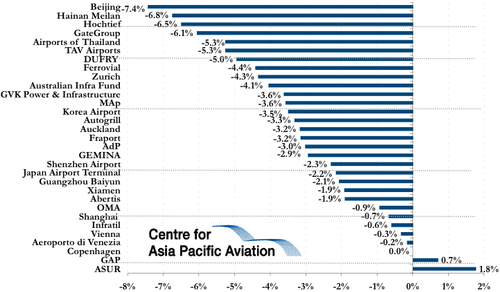