Supplier share prices were generally down on 27-Apr-09, following major falls in aviation-related stocks across most markets due to the swine flu outbreak.

B/E Aerospace’s share price tumbled 23.1% after the company announced details of its 1Q09 financial results and cautioned of a “further downdraft” in its major markets and expected additional cuts to aircraft delivery rates by manufacturers in 2010. The company reported a 10.7% increase in revenue in the quarter, but profits declined by 21.9%, to USD37.9 million.

B/E Aerospace Founder, Chairman & CEO, Amin Khoury, noted particular weakness in the cargo and business jet segments. He also commented on lower yields for the global airline industry triggering an “increase [to] the number of parked aircraft and to further defer new aircraft deliveries. In addition… business jet manufacturers have reduced delivery rates, in some cases, by up to 40%.”

Meanwhile, Boeing displayed resilience to the general downturn, rising 1.9% yesterday. Chairman and CEO, Jim McNerney, stated at the company’s AGM that the manufacturer’s order backlog and diversified operations will see it through a “once in a lifetime downturn” and it will continue to expand. He also confirmed progress on the company’s B787 programme, with the aircraft due to commence test flights in 2Q09. Boeing also announced the completion of a major milestone in its B747-8 programme. 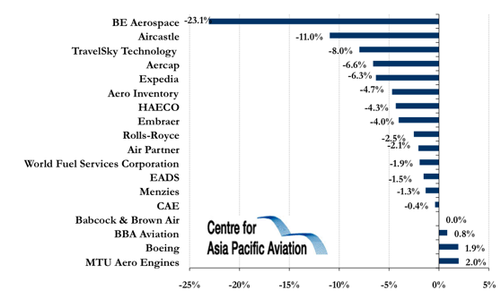