Cathay Pacific has gained short term breathing room by securing the massive government-led bailout package that it needs to survive. Now it must turn its focus to the long term by reshaping the company to ensure that it can compete in the post-coronavirus industry landscape.

The financial support package is worth up to HKD39 billion (USD5 billion), the majority of which will come from the Hong Kong government. The bailout includes what is believed to be the government’s first direct investment in a private company. This underlines the importance of Cathay to Hong Kong’s economy, and the scale of the package illustrates the magnitude of the airline’s predicament.

Once again, the appetite of governments to intervene to help their airlines is one of the biggest factors in determining which Asia-Pacific carriers will emerge in the best shape when the COVID-19 crisis eases.

Airlines like Cathay Pacific and Singapore Airlines will have an advantage in that respect, although they still have work to do to ensure they realign themselves to the new market realities.

Cathay already faced problems before COVID-19 arrived. The airline’s demand was weakened due to the protest movement that began in Hong Kong last year, and it was still in a fragile condition when the pandemic delivered an even larger blow.

The chart below shows the steep fall-off in the group’s capacity since the start of 2020, a curve that has become depressingly familiar in the airline industry this year. 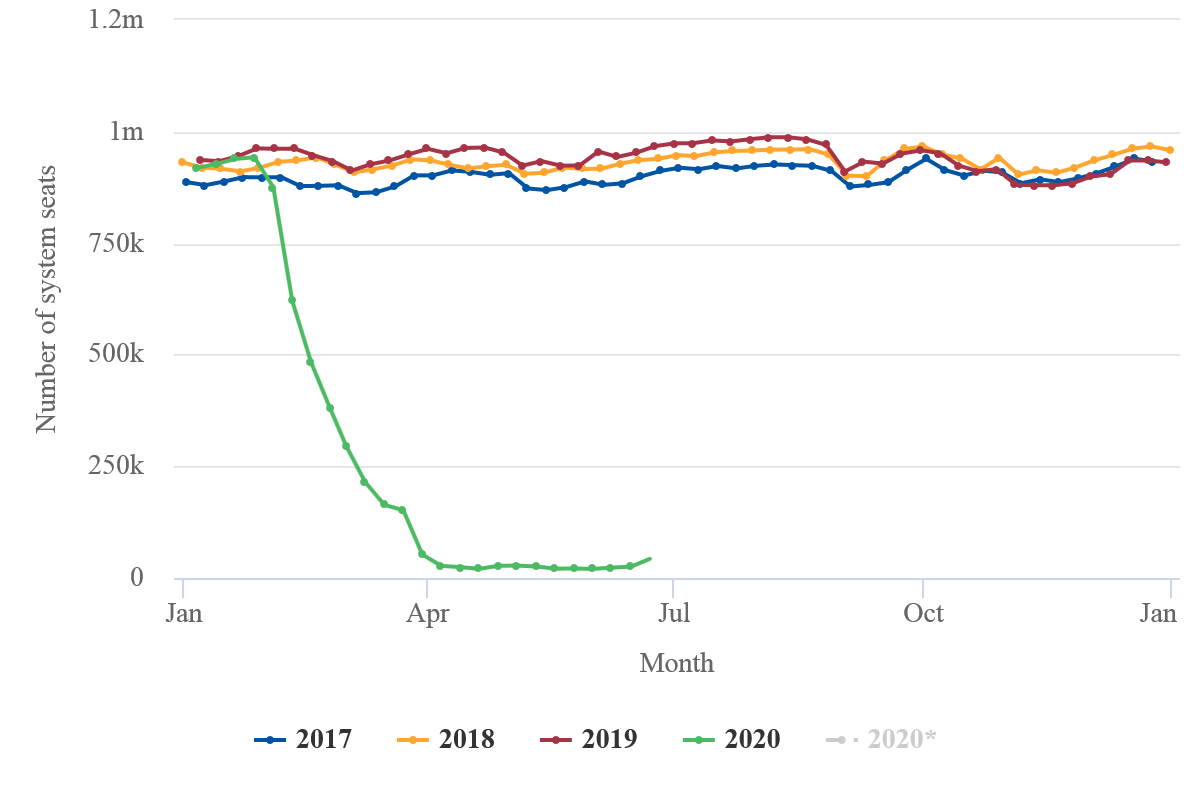 Focusing on traffic, the following chart better illustrates how Cathay’s demand had barely recovered from the Hong Kong protest movement when the effects of the coronavirus outbreak began to hit.

Passenger traffic began to lag from about Aug-2019, in fact, as the protests dampened demand. 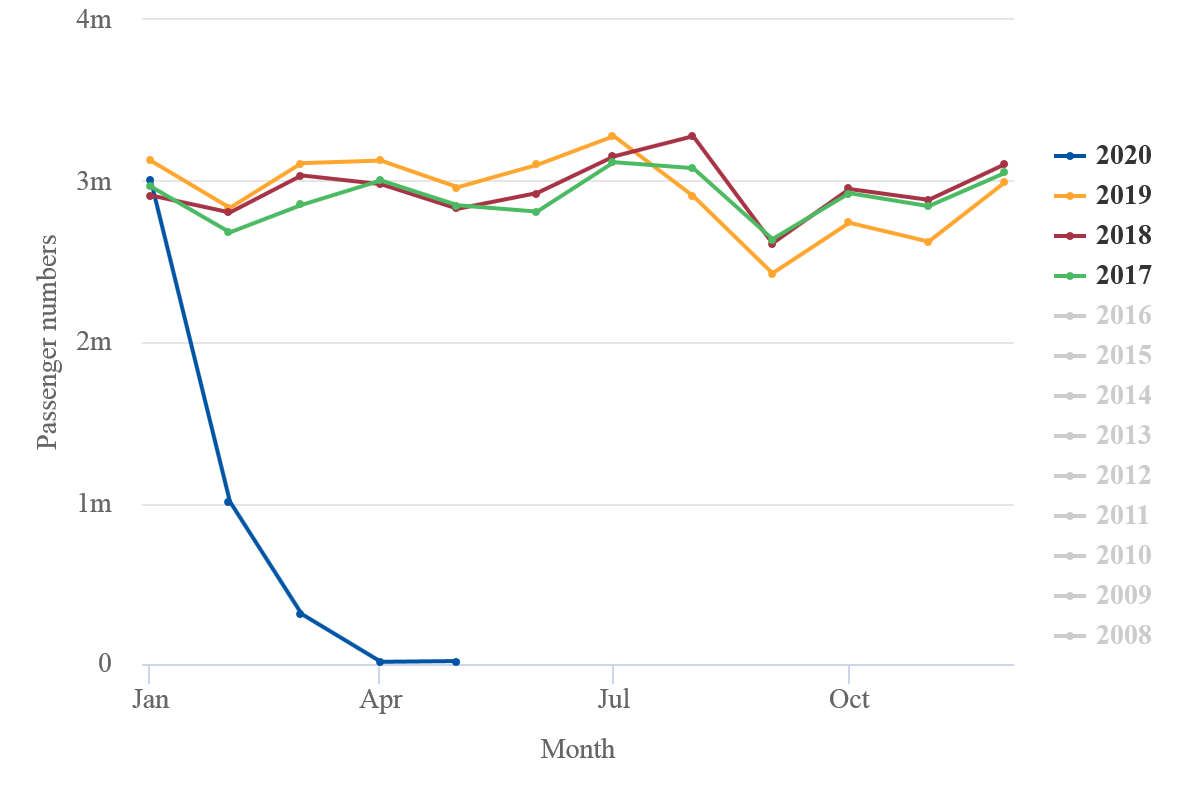 As would be expected, the drop in the second half of 2019 was most severe in Cathay’s key mainland China markets, as the next chart shows. These dynamics illustrate the brutal 12 months Cathay has had to endure. 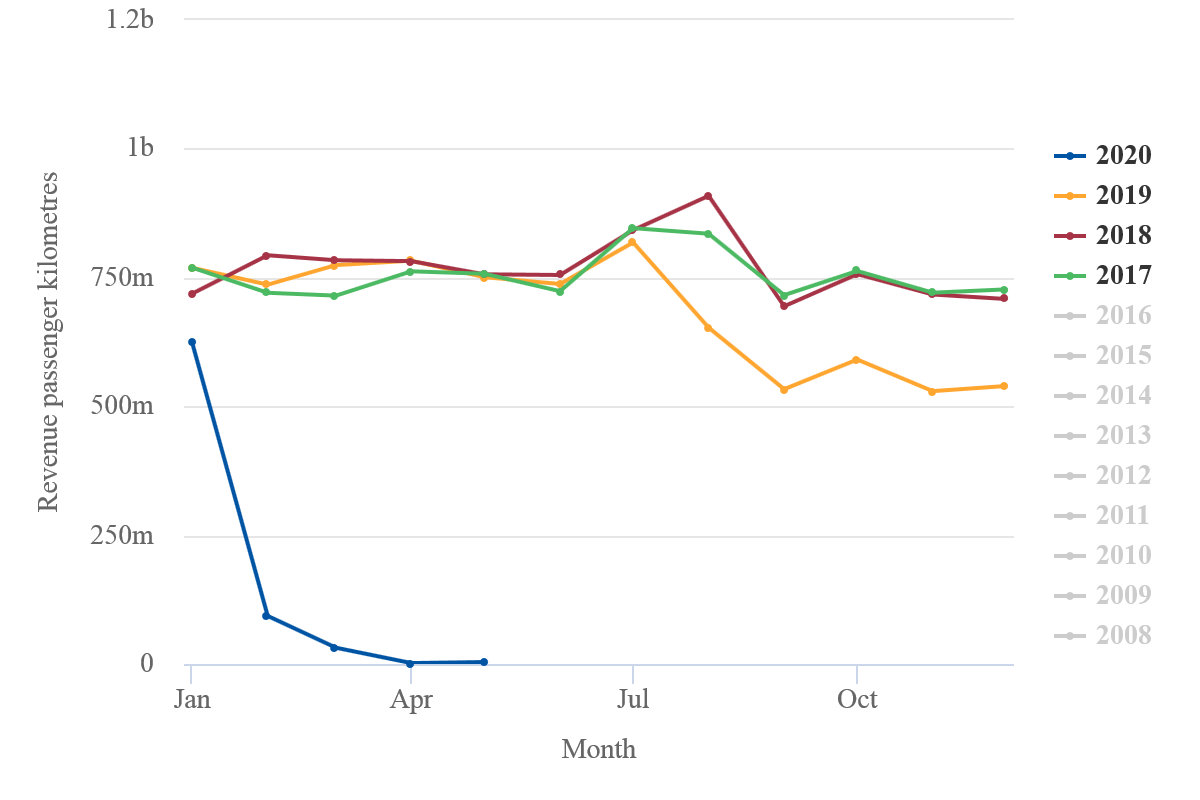 All airlines have been affected by the COVID-19 crisis, but Cathay – and its rival Singapore Airlines – have been particularly hard hit because of their lack of domestic routes. When borders were closed around the world, these airlines’ operations essentially ground to a halt.

The airline estimates its capacity will remain at 3.5% in Jun-2020. Plummeting revenue caused a net loss of HKD$4.5 billion for the first four months of the year, and Cathay projects “a substantial loss” for the first half.

These factors left a narrow path to survival for Cathay, and highlighted the importance of gaining approval for the government-backed rescue package.

Cathay Chairman Patrick Healy says there was no other alternative available that would have avoided “a collapse of the company,” because commercial debt markets “are effectively closed” to airlines that do not have strong support from governments and shareholders.

Hong Kong government gains a stake, while other holdings shrink

As part of the package, the government has agreed to invest HKD19.5 billion through the purchase of new shares, and it will also provide bridge loans worth HKD7.8 billion. Existing shareholders have been invited to purchase seven new shares for every 11 they own, which will raise another HKD11.7 billion.

Cathay's major shareholders Swire Pacific, Air China and Qatar Airways have agreed to purchase their entitlements of new shares. However, they will still see a slight reduction in the percentage of their stakes. 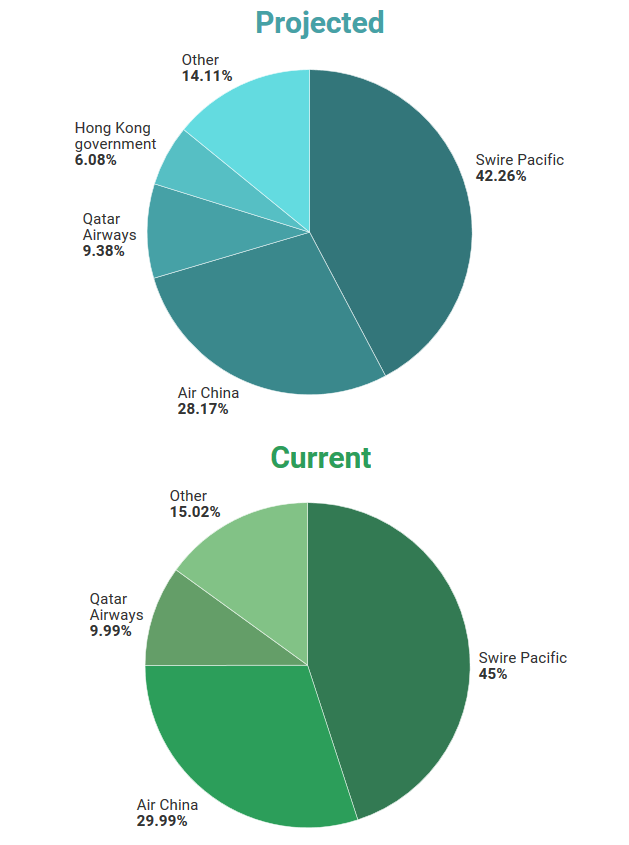 The purchase rights will be offered at a discount of approximately 47% compared to the price of HKD8.81 per share before the deal was announced. If existing shareholders do not participate in the recapitalisation, their stakes would be diluted by about 15.4%, Cathay says.

The proposal must still be approved by a special shareholder meeting on 13-Jul-2020.

The Hong Kong government is an owner by necessity, rather than by design

The government has signalled that it does not intend to be a long term shareholder in Cathay. However, it will appoint two observers to the airline’s board while it has a stake. They will not be directors and will have no voting rights, but will be able to attend board meetings and participate in discussions.

The presence of the observers is intended to allow the government to monitor and safeguard its investment, Mr. Healy says. The government has said that it will not interfere in operations or management of the business, and intends to exit in 3-5 years.

Cathay’s new financial support does not appear to presage a shift to more control by the Hong Kong – or mainland China – governments. It is clear that the government had little choice other than investing in Cathay, and taking a minority stake is hardly unprecedented for a state bailout of this magnitude. Having a couple of board observers seems reasonable in the circumstances.

Aside from the immediate relief, the bailout package also gives Cathay more options to raise money if it needs to do so. The balance sheet has been strengthened under the new arrangement, and that would allow the airline to tap into equity and debt markets either later this year or in 2021, says Cathay CFO Martin Murray.

However, the infusion of new capital “does not mean we can relax”, and Cathay must “redouble its efforts” to transform the company, says Mr. Healy. In the short term, the airline will launch a second voluntary leave scheme, which would involve three weeks of unpaid leave over the next six months. There will also be further wage cuts for management.

Large-scale workforce reductions will be avoided – at least temporarily.

Cathay revealed on 12-Jun-2020 that it would opt in to the government’s wage subsidy scheme, which provides up to HKD9000 (USD1160) per month for each qualifying employee for up to six months. The trade-off is that participating companies cannot cut staff for the duration of the subsidies.

In the longer term, the airline is launching a sweeping review of its business plan. Cathay initiated a three-year corporate restructuring program in 2017 to cut costs and improve profitability, but the assumption is that its latest effort will be far more extensive.

Cathay plans to re-evaluate all aspects of its strategy. Management will present a proposal to the board by the fourth quarter that will detail the optimum “scale, shape and size” of the group, Mr. Healy says. He notes this will inevitably mean “rationalisation” of capacity plans.

Although “nothing is off the table” in this review, Mr. Healy says the group will still have strong full service and LCC components. He stresses that Cathay sees good prospects for its Hong Kong Express LCC unit.

Another of the group’s units is Cathay Dragon, which operates narrowbodies on mainland China routes. There is certainly potential for some degree of rearrangement or consolidation among the group’s main entities.

Whatever is decided in this review will obviously have ramifications for Cathay’s fleet plans. Mr. Healy would not be drawn on what further fleet changes might be made, but he confirmed that Cathay is still in negotiations with manufacturers regarding deferrals.

Cathay originally planned to have 17 aircraft delivered for the group this year, comprising seven Airbus A350s for the parent airline, six A321neos for Dragon, and four A320neos for Hong Kong Express. The airline is working with the manufacturer to try to delay as many of these as possible, according to Ronald Lam, Cathay’s chief customer and commercial officer. Some may be pushed back to 2021 or beyond.

One option Cathay may be considering is pushing back the delivery time frame for its 777X orders. The aircraft are intended to begin replacing Cathay’s fleet of almost 70 Boeing 777s.

However, if long haul demand does not fully return for a few years, it could reduce the airline’s appetite for replacement and capital spending. Leases on 777-300ERs could be extended instead, and the airline is believed to have already taken this step with some of its 777s. There has also been speculation that the airline may look to switch 777-9 orders for 787s.

Despite latest setbacks, Cathay still has some long term advantages

A general rule of thumb is that governments are more inclined to invest in, or bail out, their country’s airlines during tough times if the airline in question has a strong financial track record. This is one reason the Singapore government was comfortable providing substantial support to SIA, whereas the Thai government baulked at pouring more money into Thai Airways and sent it to court-led restructuring.

Cathay’s financial performance has been mixed in recent years, but there are enough encouraging signs to assure the government that the airline should be a sound investment.

Before external factors such as the protest movement and COVID-19 weakened demand, there were indications that Cathay’s management was getting the airline back on track financially. While the management team changed in the fallout from the protests, it appears the current team is focused on regaining this momentum.

One aspect in Cathay’s favour is the initiative to improve integration and transport links within the Greater Bay Area/Pearl River Delta region.

This gives Cathay greater potential to expand its home market, which could eventually reduce its reliance on connecting traffic. Its multi-model approach should help it to tap into new markets, and when border restrictions ease, having a strong hub on mainland China’s doorstep will once again be a major advantage.