Baggage fees a goldmine for US carriers

US air fares have fallen sharply as a result of the recession, making baggage fees (and other ancillary revenue items) somewhat of a lifeline for the airline sector. Baggage services have quickly become a flashpoint for airline differentiation and a catalyst for marketing innovation.

For example, United Airlines this week introduced an all-you-can-carry annual fee for luggage services. Passengers can pay USD249 to check two bags every time they fly United or United Express over a 12-month period. The annual fee covers domestic or international services and standard checked bags for up to eight companions travelling under the same confirmation number as the subscriber (although the fee does not cover charges for oversized and overweight bags).

In the past three months, the Big Three US carriers have all implemented a USD50 fee to check a second bag on services to Europe.

Delta originally planned to charge a second-bag fee on all international services, not just to Europe, stating it expected to collect USD100 million p/a if the new fee was implemented on a global basis. However, it scaled back the plan to cover only European services, as other carriers failed to match the charge. It also raised product compatibility issues with its alliance partners.

The US airline industry collected USD670 million in baggage fees in 2Q2009, up 18.2% from first quarter levels, and a massive 275.7% year-on-year increase, according to Bureau of Transportation Statistics (BTS). 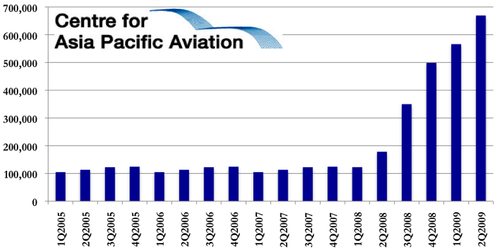 In the past six and 12 months, the carriers have collected a combined USD1.2 billion and USD2.1 billion, respectively, in baggage charges. These revenues sources are increasingly important as passenger revenue declines (in the quarter, revenue from seat sales declined a precipitous 24% year-on-year to USD22.6 billion), due to the global economic crisis. 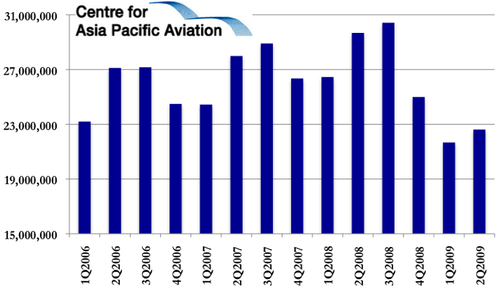 American and Delta the biggest collectors

American collected USD118.4 million in baggage charges in 2Q2009, more than any other airline, although Delta was only USD86,000 behind.

The LCCs, AirTran, Spirit, Frontier and JetBlue ranked seventh to tenth by revenue collected, respectively, behind the six majors, although this has more to do with their size than their baggage fee policies.

As a proportion of total passenger revenue, baggage revenues were much more significant for Spirit Airlines (9%), AirTran Airways (6.7%) and Frontier (4.9%) than the network carriers. 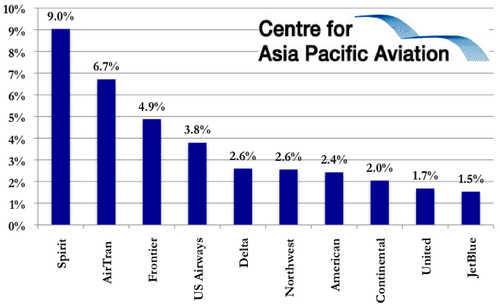 Intended to negate increased fuel costs, but still hanging around

Commencing in early 2008, most of the US carriers commenced charging for the first and second bags checked by passengers.  Previously, additional charges were not applied until the third bag was checked (see table below for full details).

The claimed reason behind the baggage fees was to help the carriers offset high fuel prices, which have subsequently fallen from their highs of around USD145/barrel (WTI) to around USD67/barrel (they are currently down 31% year-on-year). 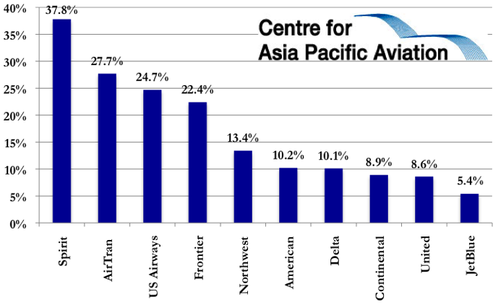 Revenue from fees imposed for cancelling or rebooking flights by all US airlines, meanwhile, rose 52% in 2Q2009, while revenue from miscellaneous fees (including assigning seats, flying pets and fees paid to the airlines for collecting airport passenger facility charges) totalled USD673 million in the quarter, up 19% year-on-year.

See related article: Ancillary revenues to jump to over 12% of worldwide airline revenues this year and next

United Airlines kicked off the rush in implementing baggage fees in Feb-2008, when it announced a fee for a second checked bag. American took this a step further in May-2008, announcing that it would commence a first baggage charge.

Most carriers have imposed first baggage fees, with Southwest Airlines, JetBlue and Air Canada the only exceptions among major US carriers. Southwest, especially, has used this position as a point of difference and has continually reaffirmed that it has no intention to charge passengers for checked baggage. But as Southwest’s margins, in particular, are squeezed, it would not be surprising if it were to back track on this at some point. The revenue potential could be too powerful too ignore.

The other carriers generally charge USD15-20 for the first bag, and USD25-30 for the second checked bags.

As the US airlines rack up well over USD2 billion in revenue from baggage fees this year, full service airlines around the world are looking on with interest, and many are likely to attempt to follow the US lead shortly.

Several LCCs outside the US are, unlike Southwest and JetBlue, already charging for checked baggage, with the fees accounting for significant proportions of their profits.

Widespread global adoption of baggage fees will depend on moves by more of the major players, although there could be resistance by European and Asia Pacific carriers if the fast-growing sixth freedom Middle East airlines continue to offer generous free baggage allowances.