Air Berlin announced the sale of two of its A320 aircraft to Avolon, under a sale and lease-back structure. The aircraft will continue to be operated by Swiss-based carrier Belair, a subsidiary of Air Berlin.

Avolon, launched in May-2010, having successfully completed its initial capital raising of USD1.4 billion, including an equity commitment of USD750 million from three leading private equity firms, namely Cinven, CVC Capital Partners and Oak Hill Capital Partners. Avolon’s committed fleet now stands at more than 30 aircraft, comprising A320s, B737NGs and A330s. A number of other transactions are at an advanced stage.

In the Americas, Southwest dipped 0.3%, as the Board declared a quarterly dividend of USD.0045 per share to shareholders of record at the close of business on 26-Aug-2010. The dividend will be paid on 16-Sep-2010. 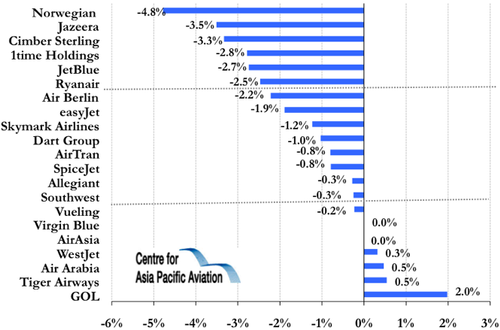