Most aviation and aerospace suppliers finished last week stronger, despite a mixed day on Wall Street and European markets. EADS, Boeing and Embraers were all up by 0.9%-1.0% on Friday, while aircraft lessors AerCap, Genesis Lease and Air Partner topped off a strong week by all gaining better then 3.0%. Babcock & Brown Air rose 1.2%, while Aircastle fell 0.6%, after a 5.4% jump earlier in the week.

Strongest in trading was BBA Aviation, which operates in the flight support and aftermarket services and systems markets. The company announced its Engine Repair and Overhaul company, H+S Aviation, was awarded Distributor and Designated Overhaul Facility (DDOF) authorisation for repair and overhaul of all models of the Pratt & Whitney Canada PT6T turboprops. Its shares rose 7.2% in trading on Friday, and gained 8.0% last week.

CAE’s shares were flat on Friday, after the company announced the creation of a limited partnership with Solidarity Fund QFL and Société générale de financement du Québec to provide lease financing for CAE's civil flight simulation equipment. The investments of the Solidarity Fund QFL and SGF are made within the framework of the new joint fund of CAD500 million announced in the latest budget of the Quebec Government.

The partners have invested USD3 million in equity to create the limited partnership based on the following holdings: SGF 40.25%, Solidarity Fund QFL 40.25% and CAE 19.5%. The partners also committed to fund the partnership with up to USD60 million (CAD66 million) in debt, in the following proportions: SGF 37.5%, Solidarity Fund QFL 37.5% and CAE 25%. Qualifying customers may access financing under this structure which would be in addition to financing of up to 85% of the equipment value available from Export Development Canada. 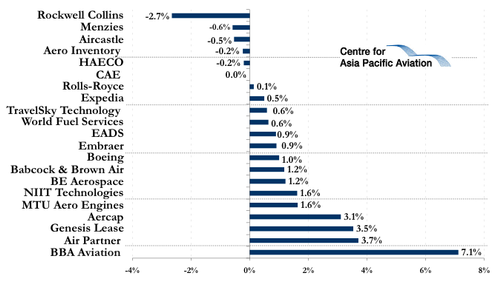