Although sustainable aviation fuel (SAF) represents the bulk of the aviation industry’s efforts to achieve its goal of zero net carbon emissions by 2050, carbon offset and carbon capture mechanisms will also play a key role in the industry meeting its targets – particularly in the short term.

Carbon offsets in particular have endured perception problems due to questions regarding their credibility. But even as the debate over the effectiveness of offsets continues, there are changes occurring in the marketplace to bolster the legitimacy of those mechanisms.

In the short term, as companies, institutions and other industries worldwide work towards their respective sustainability targets, supply challenges could emerge in the carbon offset markets.

More broadly, questions are arising about whether the industry should set interim goals, perhaps to stimulate more investment in technologies that will help airlines meet their longer term aspirations and reinforce the aviation industry's sustainability commitments.

Carbon offsets are not a permanent fixture of sustainability in aviation

SAF will account for 65% of IATA’s efforts to achieve net zero carbon emissions by 2050, followed by offsetting and carbon capture at 19%.

The aviation industry generally views offsets as a short term measure in its work to reach its stated sustainability goals, with the reliance on offsets decreasing over time as other technologies mature. 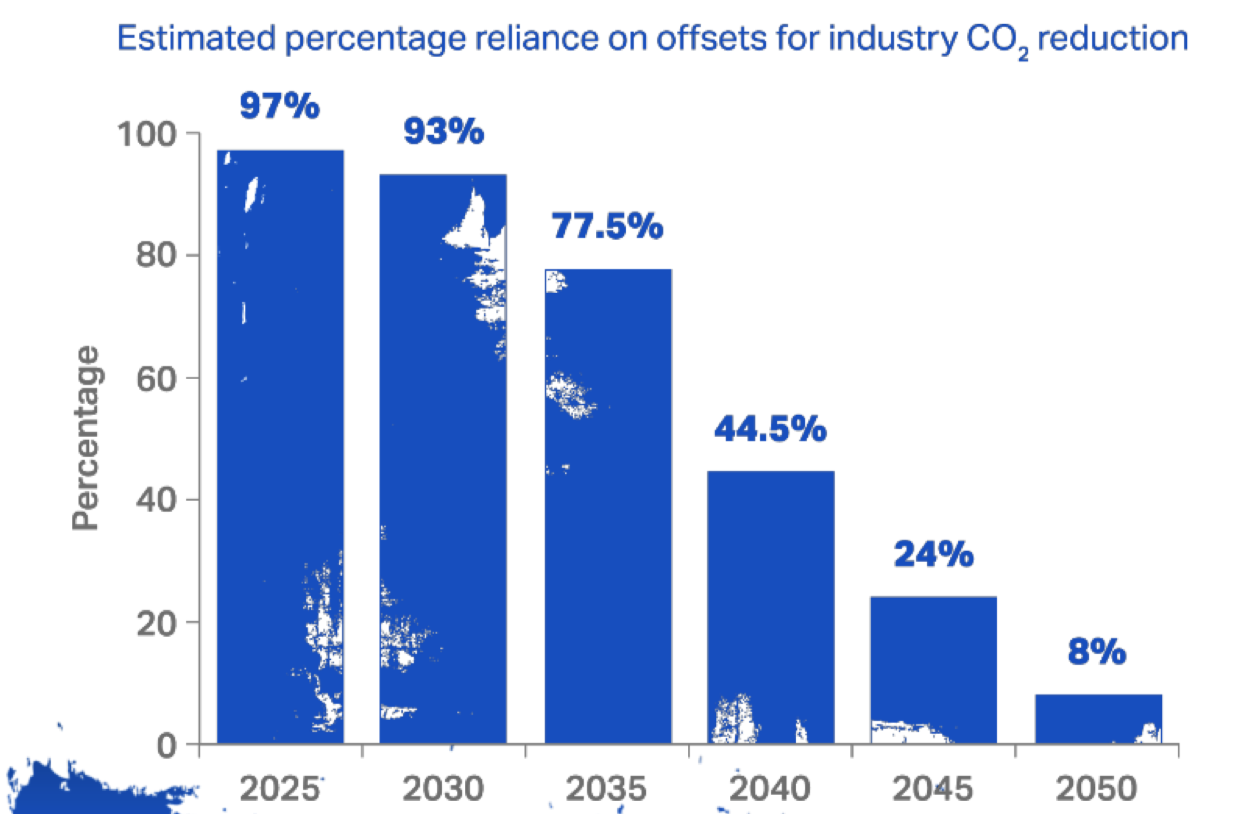 But the reality is that carbon offsets and carbon capture and removal will continue be an important lever for the industry to pull over the next few years, given that the technology for carbon capture has not fully developed.

As the industry continues to rely on the use of carbon offsets, that particular method of carbon reduction has drawn some level of criticism.

Perhaps one of its most vocal critics is United Airlines' CEO Scott Kirby, who has previously declared that “the truth is that carbon offsets – most of them aren’t even real.”

United’s rival Delta Air Lines has reached a different conclusion. “We’ve committed to invest in verified carbon offsets with the highest certification, which is the only real solution in the marketplace right now”, Delta CEO Ed Bastian said in Apr-2021.

Mr Bastian explained that Delta appreciates that “there’s a lot of concerns about efficacies and we are concerned also, and that’s why we are so specific in terms of what we’re investing in”. The airline has stated that all of its offset projects are independently audited against leading, third-party standards.

He also explained that the airline could not wait for longer-term investments to start paying off to reduce “the [carbon] footprint in the meantime”.

The credibility of offsets is improving amid their growing use

Also speaking in Doha, Everland LLC SVP of Strategic Business Development Angela Foster-Rice said that the carbon offset market was evolving as it continued to mature.

That evolution includes integrity protocols in the voluntary carbon market, “which is melding into an umbrella organisation over the different standards that are already out there". Ms Foster-Rice has previously served as Managing Environmental Counsel and Managing Director of environmental affairs at United Airlines.

She explained that “as people’s questions” about carbon offsets got harder, the market was responding. She stated that credits that are not as legitimate, or not high quality, are lower priced, and noted “we also need to expand education about what is working”.

In the future, demand for offsets could start to outstrip supply

Of course, the sustainability movement is widespread and not just limited to aviation. And with so many industries working to reduce their carbon footprint, supply and demand issues could emerge in the offsetting market.

“If you don’t get in now, you pay the higher prices later, you lose the opportunity for supply”, said Ms Foster-Rice.

She explained that airlines were competing with other industries, and many companies have progressive sustainability goals starting as early as 2030.

“We have plenty of projects that are sold out for 10 years”, Ms Foster-Rice said.

The industry has been touting its 2050 zero carbon emissions goal since that target was formally established in Oct-2021.

But now discussion is emerging over whether some interim targets should be established to trigger more investment in technologies to meet those goals and reinforce aviation’s commitment to environmental sustainability.

Will the calls for more near-term targets grow louder?

The aviation industry’s commitment to meeting its goal of net zero emissions by 2050 is unwavering, and stakeholders realise a variety of methods will be necessary to meet that target.

But discussions are also emerging regarding the establishment of more near-term benchmarks – and at some point, the industry may need to consider heeding those calls for interim goals.