"There is only one way to finance costs created by climate change – through taxes".

The Swedish word flygskam, 'flight shame' in English, underpins an anti flying movement that has spread from Scandinavia to other European countries. It reflects a growing sentiment, particularly in the developed world, that flying is a source of guilt and shame because of its climate change impact. Sweden introduced a per trip aviation tax in 2018, but Ms Andersson would like to introduce a tax on jet fuel. Meanwhile, the 2018 tax and public sentiment towards aviation's climate change impact are depressing demand for air travel in Sweden.

As a result of 'flight shame', this is causing a small but growing number of people to reduce or even eliminate discretionary air travel. Global aviation should watch Sweden with care.

Aviation accounts only for somewhere in the region of 3% of global CO2 emissions (estimates vary between 2% and 5%). However, air travel is growing faster than the world economy and its share of emissions is growing.

In addition, aviation not only generates CO2 emissions but it also contributes to the greenhouse effect through other processes. These include the formation of high altitude cirrus clouds due to particle pollutants, nitrogen dioxide emissions (which stimulate ozone formation), vapour trails and soot particles.

Methodology established by the (IPCC) suggests that the combined impact of aviation on climate change is between 1.9 and 4.7 times its direct CO2 emissions.

Moreover, only a minority of the world's population flies and so, on an individual level, aviation can account for a disproportionate part of someone's CO2 emissions.

This significantly exceeds the IPCC sustainability threshold and the 1.6 tonnes of CO2 emissions from one year's car usage, according to atmosfair.

This is just under 10% of the IPCC annual allowance, but is still more than running a fridge for a year (100kg) and it does not take many such flights to add significantly to an individual's carbon footprint.

Note: the letters 'C' and 'G' in flight illustrations refer to efficiency categories in atmosfair's ranking of airline emissions efficiency.
*Aircraft exhaust gases contain additional pollutants besides CO2. Those other pollutants are converted to CO2 equivalent emissions using the absolute global warming potential (AGWP) approach.
**Personal climate budget is the amount of CO2 that one human being can generate annually if global warming is to stay below the 2°C mark, provided the resulting world CO2 budget were equally distributed among all humans.
Source: atmosfair.

A 2014 research paper by academics at Oxford University calculated that a change of diet from medium meat eating to veganism could save 1 tonne of CO2 emissions per person per year. This saving could quickly be eroded by a few short haul flights or one medium haul flight.

A campaign that started in Sweden, called Flight-free 2019 and now updated as Flight-free 2020, had attracted 15,000 Swedes to sign a pledge not to fly by the end of 2018. In 2019 it aims to have 100,000 signatories. There are similar campaigns in Denmark, Norway, France, Germany, Canada and Belgium. 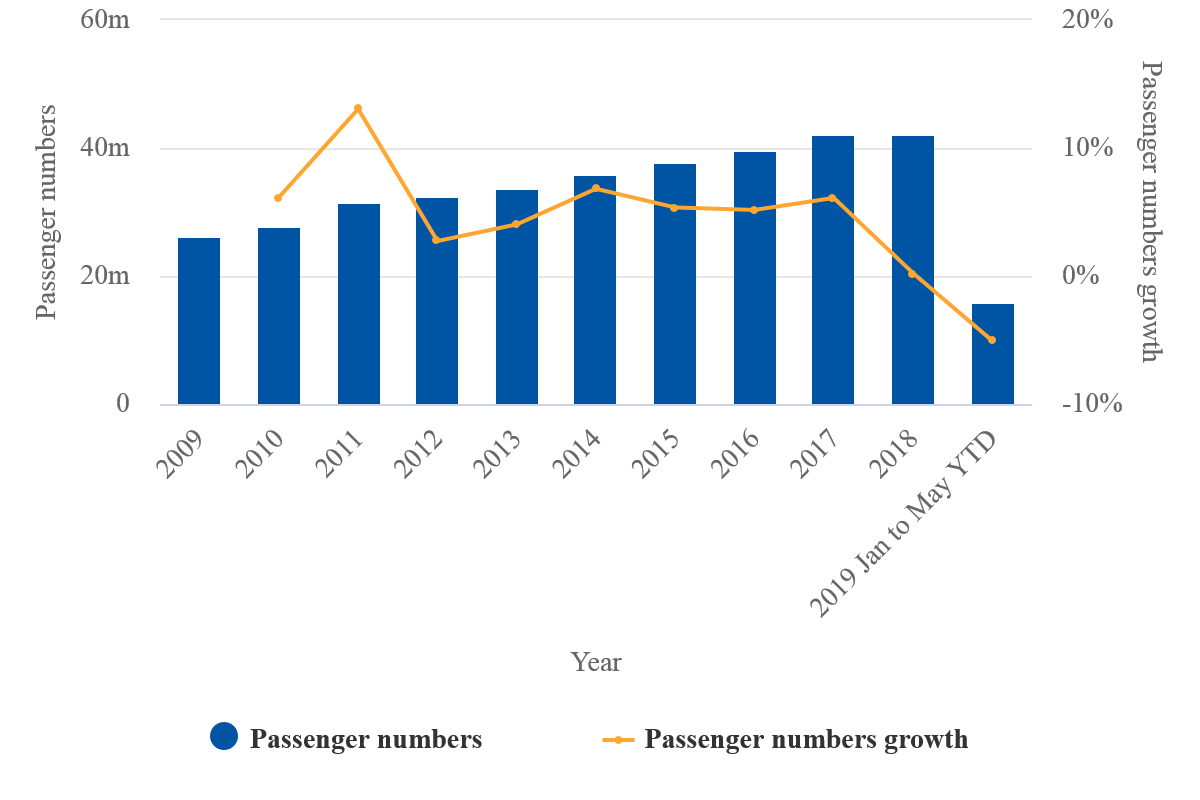 The introduction of an aviation tax in Sweden in Apr-2018 has certainly had an adverse impact on demand, but this has been compounded by what ACI Europe has called "changing attitudes towards air transport in the country" that have resulted from environmental concerns.

Moreover, these same attitudes towards aviation's impact on the environment provide the motivation for the tax, which the Swedish government introduced to combat climate change by reducing traffic.

A tax on aviation fuel, Ms Andersson argues, would therefore also benefit competition, removing what she calls "a harmful subsidy".

The Swedish government's approach appears to be adding incentives for its aviation industry to increase its efforts to combat climate change.

The country's airport authority Swedavia is aiming for its own operations to be fossil fuel free by 2020 and supports a goal for air transport overall to be free of fossil fuels by 2045.

Nevertheless, growing environmental awareness in Sweden, home to the teenage activist Great Thunberg as well as being the launch place for the Flight-free campaigns, is perhaps pushing aviation harder than in some other parts of the world.

The threat of increased taxation further raises pressure on aviation to aim for net zero emissions by 2050, rather than merely halving them, and to catalyse greater and faster progress in the development of the necessary technologies.