Shares in Austrian Airlines plummeted 34.2% on Friday, as carrier’s Executive Board and new majority shareholder, ÖLH Österreichische Luftverkehrs-Holding-GmbH (ÖLH), agreed on an offer to "squeeze out" the remaining shareholders of Austrian Airlines.

Lufthansa’s holding company, ÖLH, which already holds 95.4% of the share capital of Austrian, agreed on appropriate cash compensation of EUR0.50/per share in the squeeze out. The adequacy of this cash compensation still has to be verified by the Board of Directors of Austrian Airlines. A decision endorsing the squeeze out will be taken by an extraordinary shareholder meeting, which will presumably be held in mid-Dec-2009.

The minority shareholders of Austrian Airlines will receive cash compensation for their shares in conformity with the law after notification of the squeeze out has been entered in the commercial register, with this likely to occur 1H2010.

In Sep-2009, Lufthansa filed a buyout offer of EUR4.49 per share to acquire the remaining shares, having reached the 90% ownership requirement of the Vienna Stock Exchange. However, the offer was deemed unbinding after the German carrier’s shareholding exceeded 90%.

The European Commission approved the takeover by the German carrier on 28-Aug-09, when Austrian Airlines' shareholders offered a total of over 75% of the necessary shares for sale, meeting Lufthansa’s preconditions for the merger. The merger was initially scheduled to be closed within ten stock exchange trading days.

Shares in Lufthansa were up 1.7% on Friday. 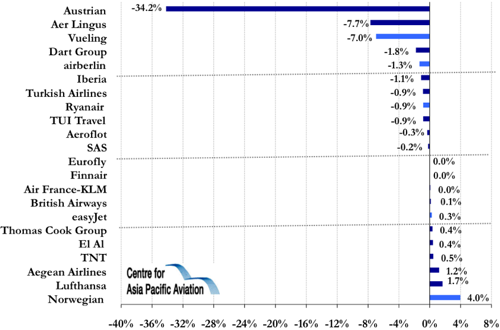