Australia’s domestic airline market is well on the way to recovery, but the competitive landscape has been transformed since the onset of the COVID-19 pandemic.

Shifting strategies from incumbents and the impending entry of a new airline are set to produce what could be the most dramatic and lasting transformation for the market since the start of the century.

After the start-stop recovery of 2020 and 2021, the rebound of domestic travel demand in 2022 has run ahead of expectations, mostly on the back of strong leisure/VFR demand.

With travel restrictions between states lifted, Australian airlines handled 4.3 million domestic passengers in May-2022 – around 89% of pre-pandemic levels. 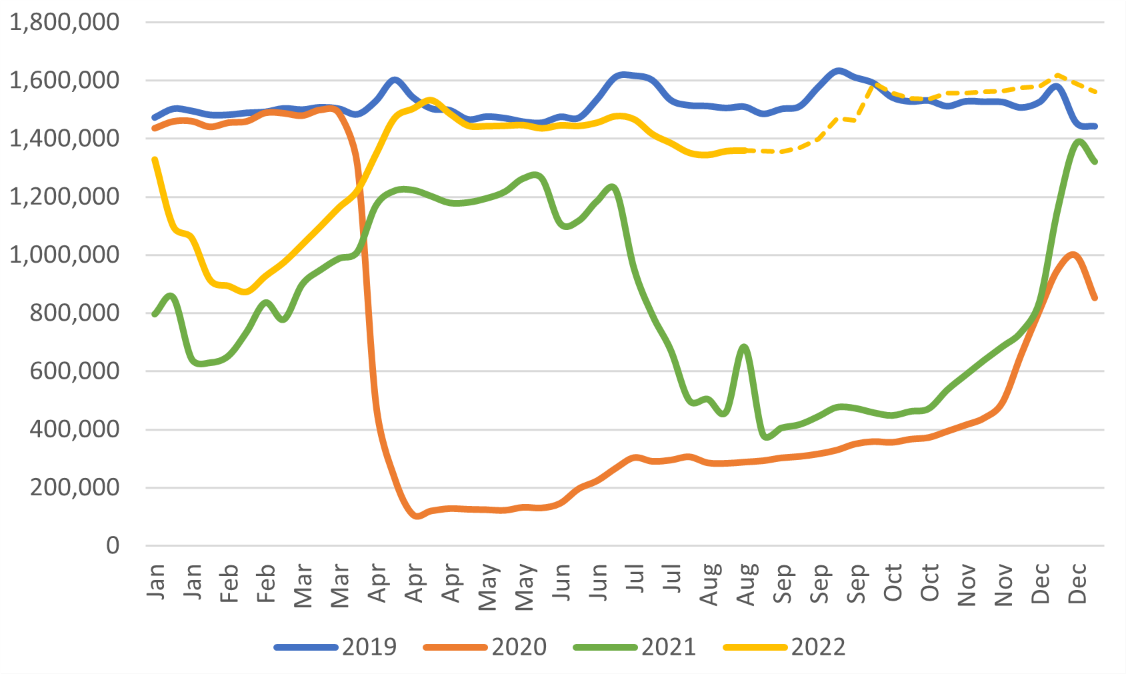 However, market conditions are far from perfect.

Oil prices have forced airlines to raise airfares and operational issues have squeezed those companies over the past few months, blunting capacity plans and creating record levels of operational disruptions.

Staffing at Australian airlines and airports has still not returned to normal, and labour issues are being exacerbated by temporary absences related to COVID-19.

The result is that airlines reported their worst on-time performance ever in Jun-2022. 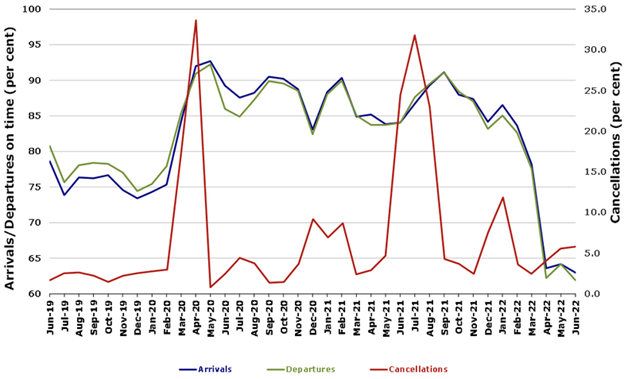 Qantas Group – comprising Qantas Airways, Jetstar, QantasLink and Network Aviation – controls approximately two thirds of the domestic market (61.2% of seats, 65.2% of ASKs and 53% of frequencies, as of early Aug-2022).

The goal for the group is a 70% domestic passenger share, which it intends to achieve through a combination of rapid fleet growth from FY2024 (year commencing Jul-2023), along with strategic acquisitions.

Although Alliance is small – with a less than 1% market share – it has a consistently profitable fly-in/fly-out charter operation and a growing fleet of Embraer E190s feeding limited scheduled services. Alliance’s E190 fleet is due to grow from 20 to 33 aircraft by early 2023, potentially allowing Qantas to open up new routes and to shift some of its domestic 737 fleet to routes that are better matched to capacity.

Qantas is also on the cusp of a major domestic fleet transition, starting a move to an all-Airbus narrowbody fleet.

In May-2022 an order for 20 A321XLRs and 20 A220-300s was finalised, adding to the 108 A320neo family aircraft already on order. These will gradually replace its domestic 737NGs and 717 narrowbodies, with the new aircraft offering higher capacity, more range and better fuel efficiency. Deliveries are due to begin in mid-2023.

After nearly two and a half years of navigating the COVID-19 pandemic, Australia’s largest airline group reported that it is “seeing a strong, sustained recovery in travel demand”.

However, fuel prices and workforce issues – including pilot and ground crew shortages – have resulted in it pulling back on ambitious capacity growth plans in recent months.

In Jun-2022 it announced that it would operate around 103% of pre-pandemic domestic capacity – down from an earlier plan to operate 110%; but it only managed around 90%. 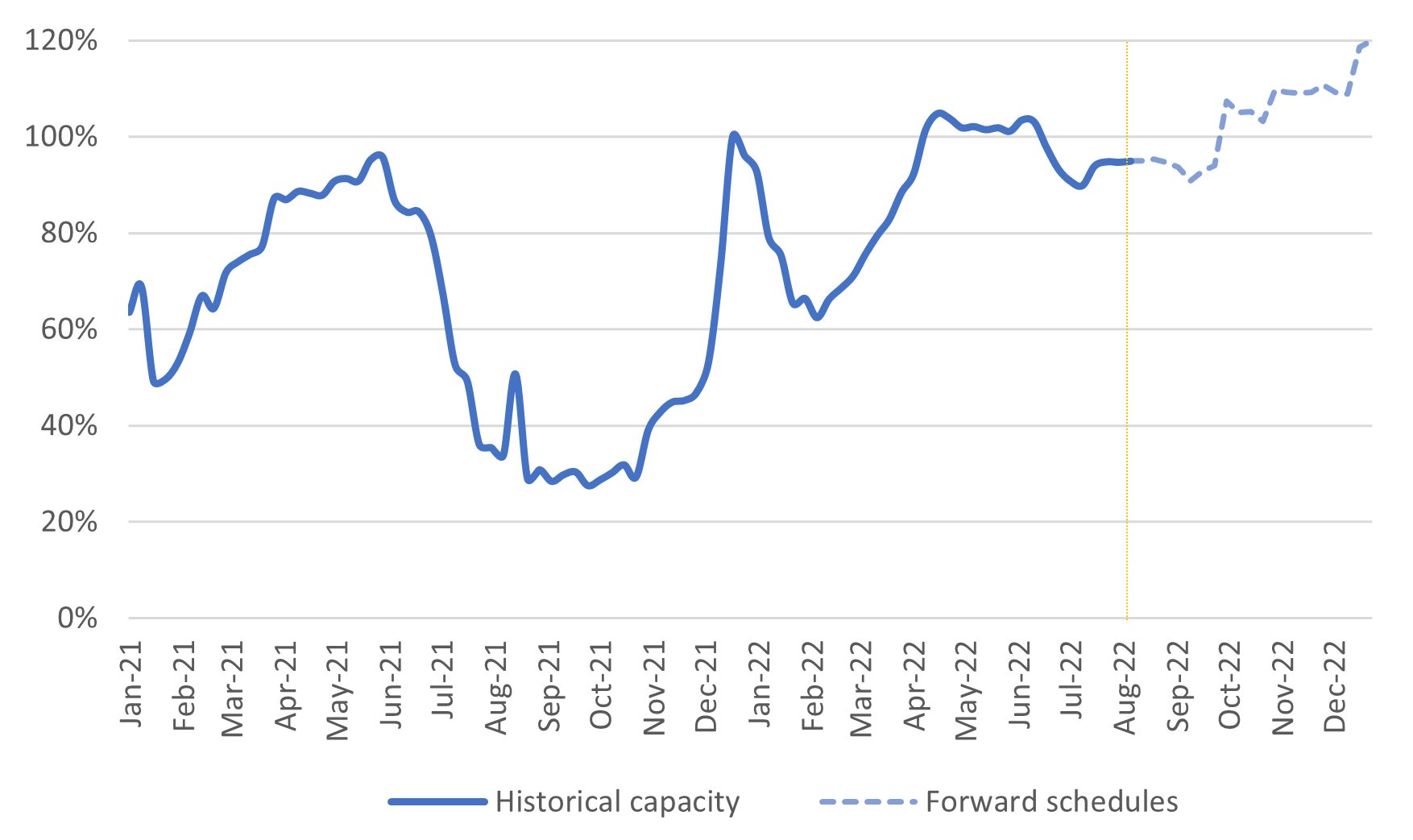 Virgin Australia, which collapsed at the start of the COVID-19 pandemic, has been reconstituted under the new ownership of Bain Capital.

The airline exited administration in Nov-2020 with a little over 20% of the Australian domestic market and has steadily expanded since then, even briefly holding the title of largest domestic airline by market share during early 2022. 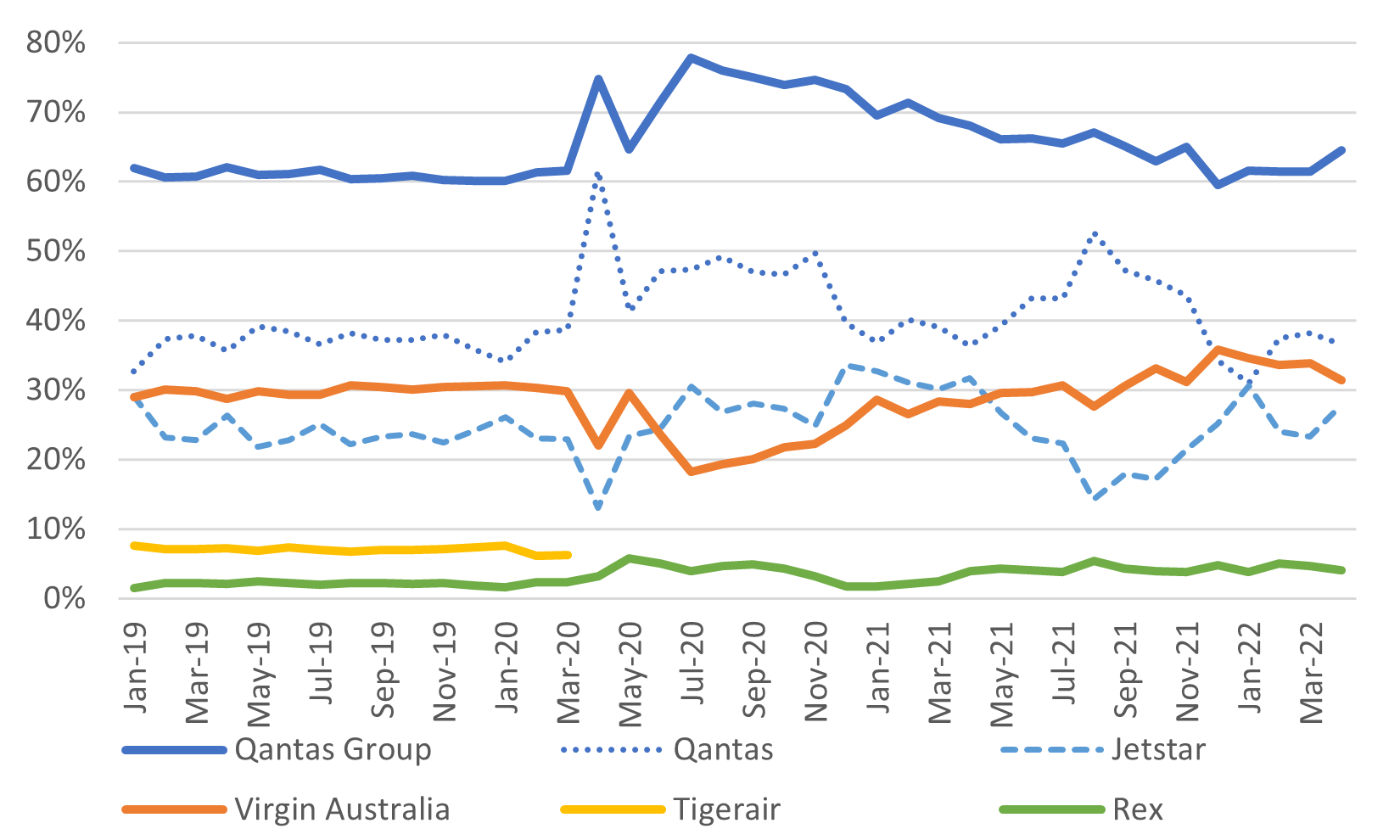 The airline will continue push-back full recovery of its domestic capacity and beyond, announcing an order for four new Boeing 737 MAX 8s in May-2022. This will take Virgin’s fleet to 88 aircraft, allowing it to phase out older Fokker 100 regional jets and replace them with 737-700s.

Virgin Australia plans to hold a domestic market share of around 33%. With Rex and Qantas expanding and Bonza due to enter the market shortly, this is going to be a difficult prospect.

Part of the issue is that Virgin has largely ceded the international market to Qantas, with just two short haul international routes remaining: to Nadi (Fiji) and Bali (Indonesia).

To pull international traffic to feed its domestic routes and market international routes to Australian travellers, Virgin is tying up with foreign airlines. The ACCC recently granted an interim authorisation for the airline to codeshare with United Airlines, Qatar Airways and Singapore Airlines. Similar arrangements with other airlines, including with All Nippon Airways, Air Canada and Hawaiian Airlines, are also under consideration.

Rex moves to support its future as mainline jet operator

The regional player Regional Express turned 20 at the start of Aug-2022 and it enters its third decade with a newly ambitious outlook.

In 2021 it took advantage of Virgin’s temporary exit and the slow restart of operations by Qantas and Jetstar, adding narrowbody jet operations for the first time in its history.

Two more 737-800s are set to join the narrowbody fleet, and Rex has ambitions to build its jet operations to as many as 30 aircraft. 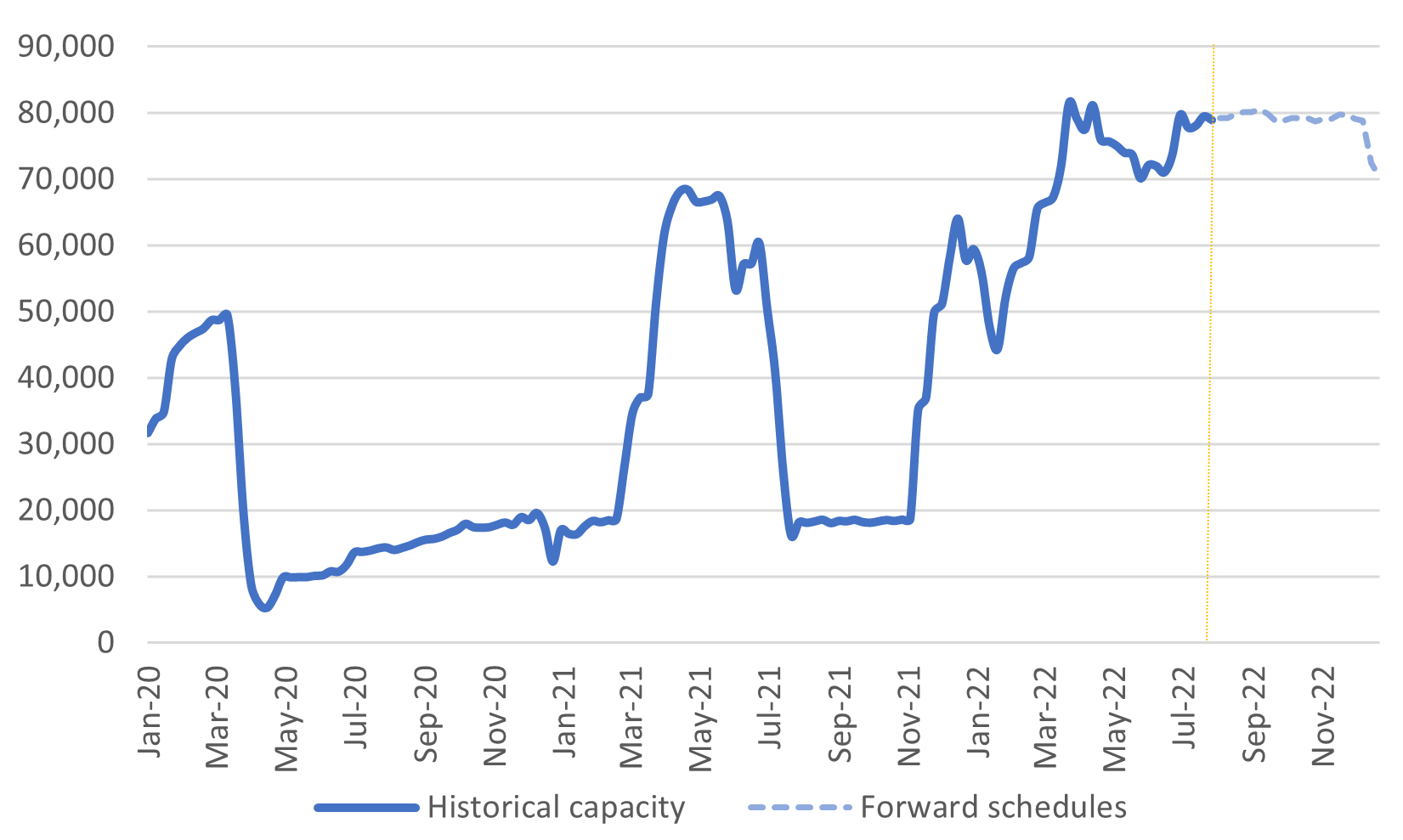 With a year of jet operations underneath it, Rex is now moving to solidify its domestic position as Australia’s third large jet operator.

Immediate plans are focused on enhancing its customer service offering, improving its loyalty programme, and updating and expanding its lounge network. Also in progress is an interline agreement and proposed codeshare partnership with Delta Air Lines – giving Rex access to international connections for the first time.

Bonza aiming for September launch to shake things up further

The ultra-low cost start-up Bonza took delivery of its first 737 MAX at the end of Jul-2022 and is working towards securing approvals for a late Sep-2022 launch, after having already delayed its launch.

The airline will operate from the Sunshine Coast, with another hub in Melbourne, and plans to build its fleet to eight aircraft within 12 months of launch. These aircraft will be leased under 777 Partners, Bonza’s principal investor and the owner of the Canadian ULCC Flair Airlines. The investment firm 777 Partners has outstanding orders for 134 737 MAX 8s and 200 MAX-8-200s.

Bonza’s initial network plans to cover 17 destinations on 27 routes – largely leisure-focused routes connecting regional centres. According to the airline, 25 of its new routes are only operated by a single airline and only one is currently served by an LCC.

As of Apr-2022, just over half of Australia’s 160 major domestic routes had a single airline operating on them, although these routes accounted for just under 10% of total passengers and may lack the passenger volume to support 737 MAX operations.

Bonza will be the first significant airline launch in the country since Tigerair Australia in 2007.

The airline’s ULCC model and initial route plans – outside the profitable ‘Golden Triangle’ – are aimed primarily at market stimulation via cheap fares. This is a relatively novel route, although elements of it have been tried before, without complete success.

Even so, the entry of Bonza promises to bring a further shake-up to Australia’s previously cosy monopoly/duopoly situation on many of the country’s domestic routes.