Qantas’ shares gained 0.8% on Tuesday, with Virgin Blue’s shares down 1.8%, ahead of the release of the Australian Government’s Aviation White Paper today (16-Dec-2009). As part of the Aviation White Paper, the Australian Government stated it would relax some ownership restrictions on Qantas Airways, removing a 25% restriction on individual foreign investors in Qantas and eliminating a 35% cap for total foreign airline holdings, while maintaining a 49% cap on foreign ownership). The decision will “increase Qantas' ability to compete for capital and to take opportunities to form strategic partnerships in an increasingly globalised industry," according to Transport Minister, Anthony Albanese.

The Government is also considering “more flexible arrangements” for the ownership of other Australian international airlines where an approach is made from a nation with which Australia has an Open Skies Agreement in place, a move which will increase the options available for Virgin Blue’s long-haul subsidiary, V Australia.

Shares in the major listed Indian carriers, Kingfisher Airlines, SpiceJet and Jet Airways, were all down yesterday, by 5.5%, 5.4% and 3.5%, respectively.

The Indian Ministry of Civil Aviation reported a sharp pickup in domestic air travel in Nov-2009, up 29.8% to 3.9 million (but down 1.7% from Oct-2009 levels), as improved economic environment stimulated both premium and leisure demand. However, air fares are yet to recover in the market, continuing to put pressure on profitability. 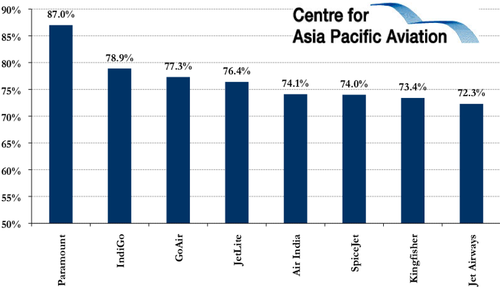 Air China’s Nov-2009 traffic revealed continued growth in passenger traffic across the board in the month, with cargo traffic continuing to “gather momentum”, with accelerated year-on-year growth of 13.4%.

Passenger numbers were up 15.6% to 3.3 million in the moth, driven by double-digit domestic, regional and international traffic, of 15.9%, 32.9% and 10.3% respectively. Load factor improvements were also experienced across the board, resulting in a 3.7 ppts improvement to 79.3%.

Singapore Airlines, upon the release of its Nov-2009 traffic results, stated traffic demand has been “encouraging as global economic conditions show signs of improvement”. During the month, passenger numbers were down 7.3% to 1.4 million, reflecting a 9.4% capacity (ASKs) reduction, while load factors improved by 3.8 ppts to 81.9%.

Japan Airlines’ shares gained 2.0%, after the carrier stated it received approval from approximately 5,700 retirees for proposed reductions to their pension benefits in a preliminary survey, equating to 75% of respondents. The results prompted the carrier to state, “we believe it will be possible to reach (the two-thirds) in view of the fact that three-quarters of the respondents gave their approval".

At the other end of the spectrum, Air Arabia’s shares were down 7.8%, following the previous day’s 14.6% gain. 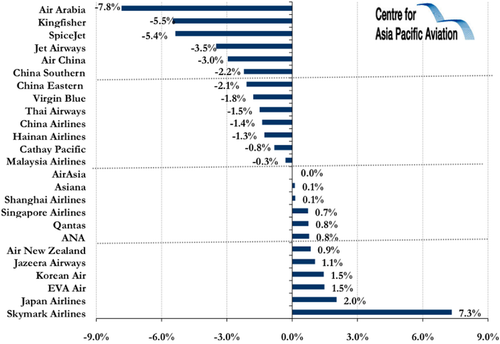