Australia’s best discount (cheapest) domestic fares surged 29% in Jul-2011, typically a weaker winter low season in Australia, to the highest level of 2011 in the same month that saw the unprecedented grounding of Tiger Airways Australia. The figures support concerns that the grounding of Tiger Airways Australia for “systemic” safety concerns is creating a substantial upward pressure on airfares. 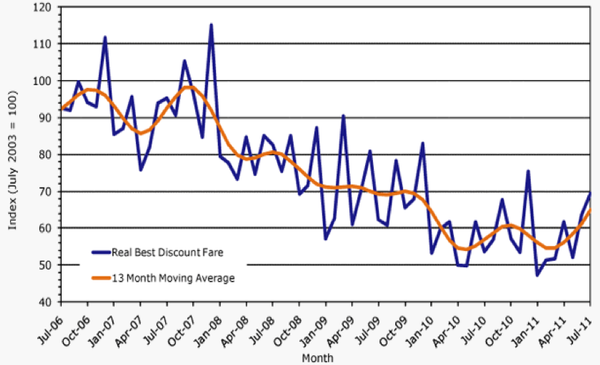 In other bad news for Australian consumers, the Australian Government this week announced that effective 01-Jul-2012, domestic aviation fuel excise will be increased by an amount equivalent to the carbon price of AUD23 (USD21.40) per tonne on an annual basis over the fixed price period to “provide an effective carbon price for aviation”, according to government papers. Qantas and Virgin Australia have stated they would pass on the cost to consumers, resulting in average domestic fare increases per sector of approximately AUD3.00 to AUD3.50. 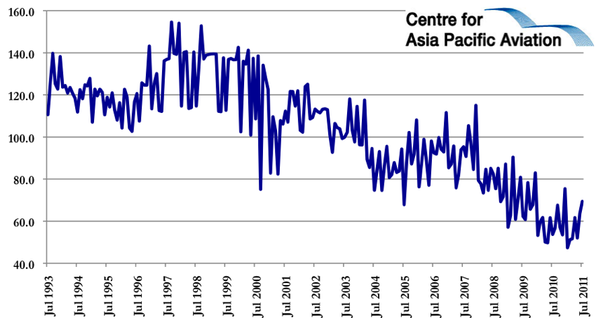 The landscape changed again notably with the entry of Tiger Airways Australia into the market in Nov-2007 as an aggressive entrant looking to undercut Virgin Blue and Jetstar with even cheaper fares. The entrance of Tiger contributed to considerable downward pressure on prices in the market, as highlighted by the BITRE fare data. 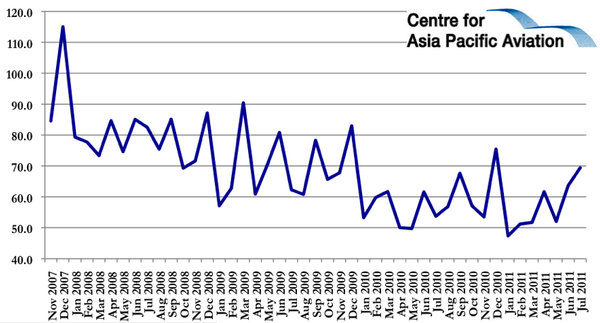 Over its time in the market, Tiger Airways established its price-leadership position with the carrier continuing to offer reduced airfares throughout 2010 and into 2011. Tiger’s key promotional feature has been AUD29 sales on Melbourne-Sydney services, and it has also offered a considerable number of promotional seats for AUD1 return.

While Tiger has been a relatively small player, with a fleet of only 10 aircraft and 4% of Australian total capacity, its influence on fare levels has been wholly disproportionate in driving fares down across the board. In fact, best discount economy fares have fallen by around 50% since the carrier’s entry into the market, supporting the carrier’s comments that it has been key in contributing to a reduction in airfare levels in the Australian domestic market.

This week, Tiger Airways Holdings CEO Tony Davis stated consumers wanted Tiger to remain in the Australian market, saying it had reduced airfares dramatically since the launch of service almost four years ago. He assured customers that the carrier remains “committed” to the Australian market and believes it has a long-term future in the market. If Tiger Airways withdraws from the market, it is likely that fares will return to the higher levels of 2007-08 amid reduced competition in the market.

In the immediate term, the grounding of Tiger's domestic Australian services has resulted in increased fares during Jul-2011, according to ITA Software data, which tracks the fare movements of airlines in the Australian market (NB Tiger Airways Australia fares are not included in this data set).

Fares however are declining again in Aug-2011, when Tiger could return to operations. Tiger Airways Australia will be grounded until at least the end of this month, following the Civil Aviation Safety Authority's (CASA) application with the Federal Court seeking an order that the airline not fly until 01-Aug-2011. When the carrier resumes operations, it is expected the LCC will offer deeply discounted fares to win passengers back and restore the considerable damage done to its reputation. 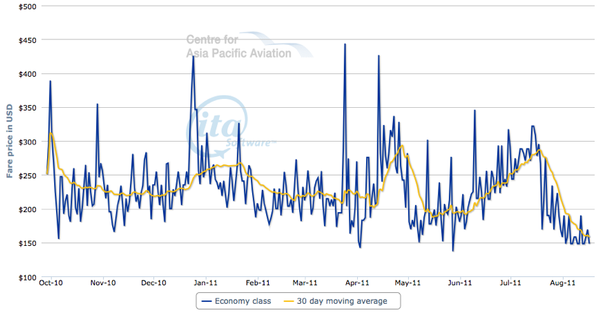 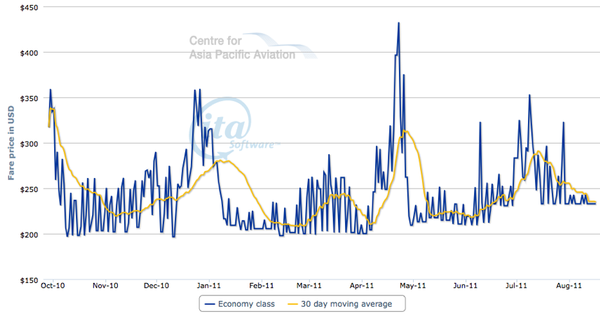 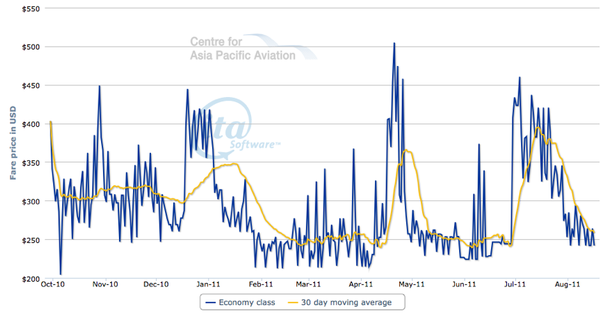 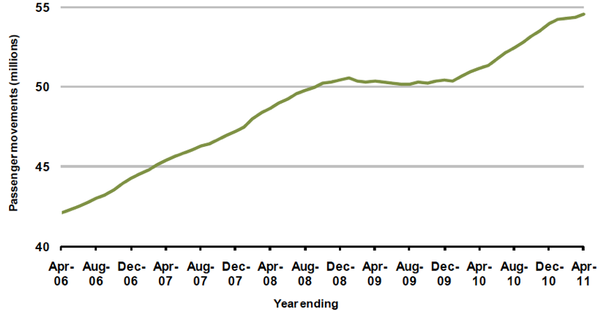 BITRE also noted that Australian domestic business-class fares were also higher when compared to Jul-2010, at 107.8, while restricted economy and full economy fares declined in the month. 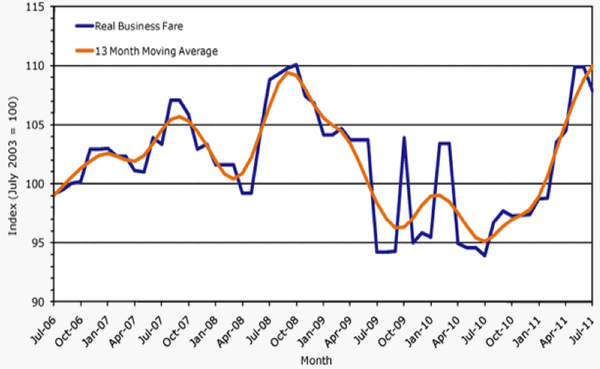 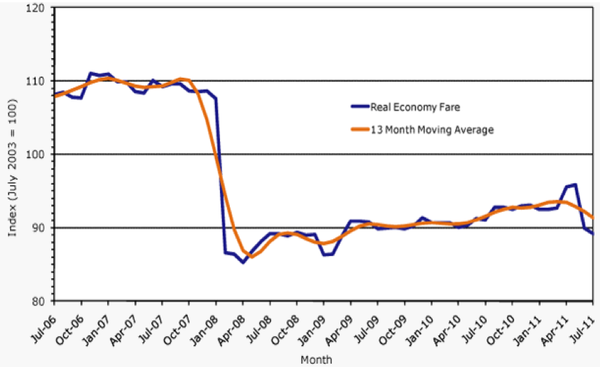 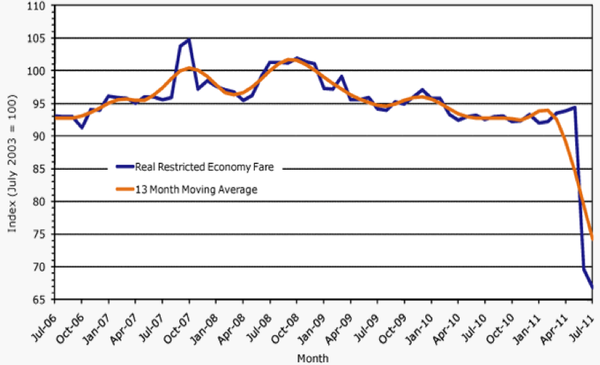 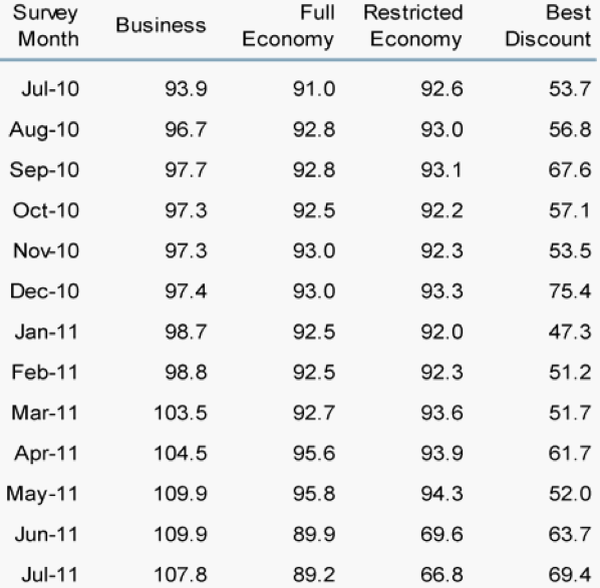