Australian airlines have reduced their "Best discount" (cheapest) airfares in Jan-2011 as they reduce fares to boost passenger levels and load factors amid fragile consumer confidence, excess capacity and poor weather, according to data released by Australia’s Department of Infrastructure and Transport’s Bureau of Infrastructure, Transport and Regional Economics (BITRE).

The reductions highlight the seemingly continual decline in Best Discount fares, which are typically purchased by more price-sensitive leisure passengers, in Australia.

The downward price trend reflects the challenging combination of an imbalance between capacity and demand and an intensified battle between the incumbents in the market – Jetstar and Tiger at the low-cost end and Virgin Blue and Qantas in the higher end - coupled with continued sensitivity of passengers to price which has led to discounting on most Australian leisure segments.

As Virgin Blue Chairman Neil Chatfield recently noted: “The market remains volatile and continuing competitive pressures, along with stress on consumer spending, is constraining our ability to significantly improve yields, in the short term.” Qantas has similarly noted the difficult battle for leisure travellers in the domestic market.

The lower fares are expected to continue in the months ahead with the market expected to be quite aggressive throughout 2011, as Virgin Blue and Tiger ramp up their capacity and their respective strategies to attack Qantas’ market shares - and its 65% "line in the sand". 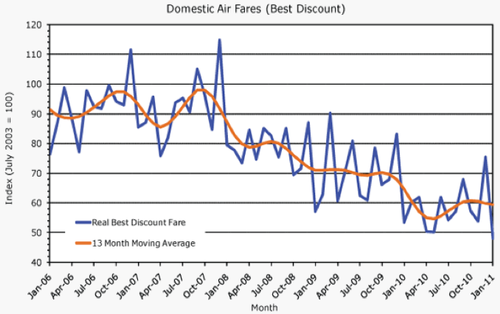 Economy fares have also slumped but are showing signs of a slight recovery from a low in May-2008 while restricted economy fares remain only marginally above the lows witnessed in Oct-2010. Qantas has labelled the heavily discounted airfares over 2009 and 2010 as "simply not sustainable".

Virgin Blue to move away from reliance on 'dangerous' leisure segment

The competitive landscape in the domestic market has changed significantly over the past decade. The Australian domestic market was a duopoly until the entry of Virgin Blue in Aug-2000. With the collapse of Ansett in Sep-2001, Virgin Blue quickly became Australia’s second major domestic airline. Qantas’ LCC, Jetstar, was established in 2003 to counter the impact of Virgin Blue and as part of efforts by Qantas to maintain a 65% domestic market share. The landscape changed again notably with the entry of Tiger Airways Australia into the market in late 2007 putting, and continuing to create, significant pressure on all incumbents, with Virgin the worst affected.

Tiger Airways Australia’s MD, Crawford Rix, has stated there is still a "huge opportunity" for the carrier to grow in Australia shrugging off Qantas' plans to defend its 65% market share and adding that Virgin Blue’s plans to focus on business passengers will provide more growth opportunities for Tiger.

Mr Chatfield recently commented that the leisure segment has “become highly commoditised and best left to others” recognising the impact and growth of Jetstar Airways and Tiger Airways on the competitive profile of the Australian domestic market and on domestic yields.  Similarly, CEO and former Qantas executive John Borghetti noted the impact of the “two aggressive competitors” in the leisure market

Mr Borghetti added that Virgin Blue, which has forged a strong position in the leisure and SME market, has become “over reliant” on that potentially “dangerous” segment which is less lucrative and more volatile at times of downturn.

“The corporate and business end of the market is effectively controlled by one player, one player with a significantly higher cost base. It is therefore logical for us to diversify our revenue base, reduce our exposure at the lower end of the market and use our cost base as an advantage,” he said. Business-class fares have increased slightly in Jan-2010, up 3.8 index points to 99.2ppts to reach its highest level since Mar-2010.

“Clearly at the beginning of this year when there was a downturn in leisure spending, the leisure market in airfares felt it the most, whereas the corporate sector kept really travelling normally. So it is prudent and it is logical for us to hedge our revenue base to offset any potential that you might have at any one end of the market,” he said.

Qantas, while feeling the impact of the increased competition and challenging economic environment, has benefitted from its two-brand strategy as Jetstar bears the brunt of the increased domestic competition leaving its parent to worry about the weakened international and freight demand and yields. This adjustment is expected to continue with the carrier stating it plans to capitalise on its “unique ability to be able to grow whichever brand is performing best at that particular time”. 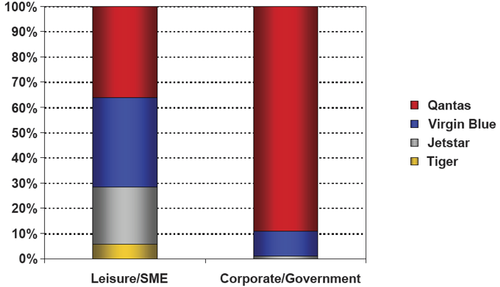 Another factor affecting fares is the recent severe weather in Queensland, a key holiday state in Australia. Queensland, and its capital Brisbane, has faced heavy rains and flooding over Dec-2010/Jan-2011 with the situation escalating to a state of emergency in Jan-2011.

The flooding is having a devastating impact on the state's tourism sector with Queensland Tourism Industry Council stating the financial impact on the tourism industry will be "very, very significant and we are certainly talking in hundreds of millions (of dollars) rather than anything smaller". Queensland is heavily reliant on the leisure sector with the disaster expected to have a long-term affect on tourism levels.

Qantas spokesman Simon Rushton stated it has reported cancellations on services to Brisbane, while flooded Rockhampton Airport has been closed and Virgin Blue’s Brisbane headquarters have been evacuated.

With four players in the domestic market, there is likely to be a gruelling and aggressive battle ahead as Virgin Blue and Tiger ramp up their capacity and their respective strategies to attack Qantas’ market share. The challenge for all concerned is to make the market sufficiently profitable to secure a long-term sustainable system. For consumers, the outlook for 2011 is more positive, with the lower fares expected to continue in the months ahead. 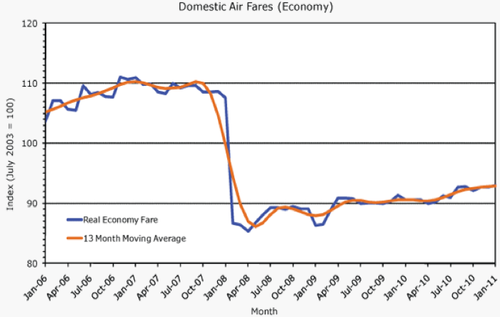 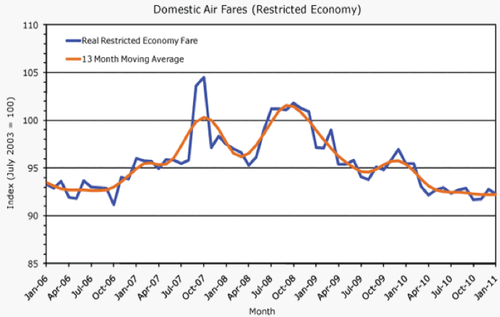 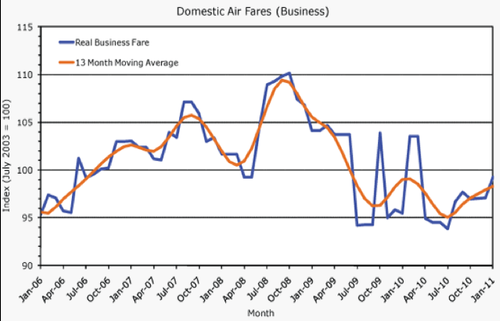 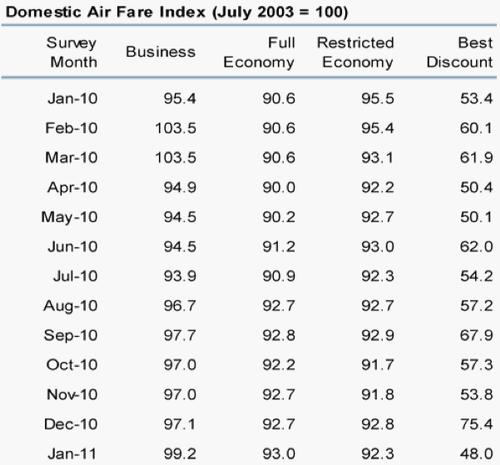