Australia puts a AUD23 per tonne price on carbon; airlines to be hit hard

Sections of the Australian aviation industry, especially regional carriers, have expressed concern with the Federal Government’s introduction of a carbon price system from 01-Jul-2012, while major carriers are warning of fare increases to recoup rising fuel costs. Domestic airlines will not have access to transitional assistance or compensation arrangements. International aviation fuel will be excluded from the carbon price scheme.

Effective 01-Jul-2012, domestic aviation fuel excise will be increased by an amount equivalent to the carbon price of AUD23 (USD21.40) per tonne on an annual basis over the fixed price period to “provide an effective carbon price for aviation”, according to government papers.

Note: impact based on emissions of the fuel only, does not include impact from other refining based emissions or energy costs.
Source: Australian Department of Infrastructure and Transport

Qantas estimates the cost impact of the scheme of approximately AUD110-115 million on the Qantas Group in the financial year ending 30-Jun-2013. The airline stated, “In the context of the significant challenges facing the global aviation industry, the Qantas Group will be unable to absorb the additional costs associated with the carbon price and there will be a full pass-through to customers.” Based on the estimated additional costs, the Qantas Group expects that the price of a single domestic flight sector will increase on average by approximately AUD3.50 in FY2013. Fare increases will vary depending on sector length and will be communicated transparently to consumers.

Virgin Australia stated that, based on current domestic fuel consumption, the estimated cost impact in FY2013 is around AUD45 million. The airline stated it will not be able to absorb the additional costs of the price on carbon "and consequently these costs will be passed in full to consumers", adding that initial modelling indicates an average domestic fare increase per flight sector of approximately AUD3, which will vary depending on sector length. Virgin stated it is "too early" to accurately forecast the impact of passenger demand as a consequence of the carbon price regime and said that any change in fares as a result of the proposed price on carbon will be communicated to customers.

"The combined effect of these measures on Rex alone would equate to at least AUD6 million per annum." Mr Hine said, adding, "I foresee many regional operators without the financial strength and diversification of the Rex Group being forced out of business once these take effect".

Discounted air fares in Australia, like other deregulated markets, have been falling in recent years. Since July-2003, passengers spending $100 on the cheapest available fares would be spending roughly $70 now. Business passenger, where Qantas has until recently had virtually no competition, on the other hand would be spending approximately $136.

From this simple analysis, those airlines positioned at the business end of the market will be less exposed to the carbon tax than those focused on the price sensitive-end of the market. In other words, Qantas has less to fear than Virgin Blue, which is turn is better positioned than Jetstar and Tiger Airways, whose business models are highly sensitive to fuel price fluctuations and operate on thinner margins. 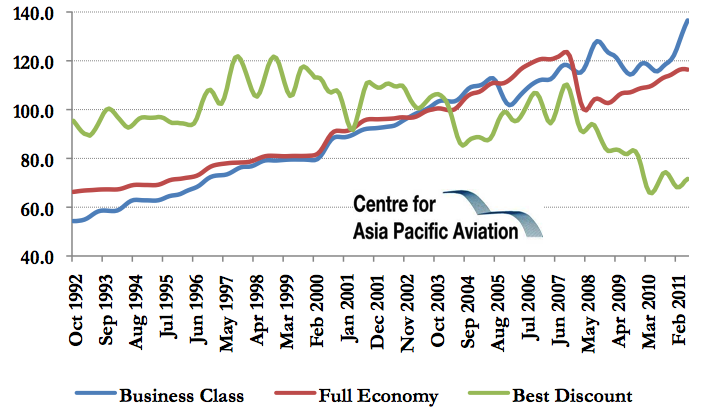 Political compromises litter the new policy. For example, trucking is excluded from the tax simply because the powerful Transport Workers Union threatened industrial action (despite also being heavily engaged in the aviation industry).

Then there is the European ETS to come. Uncoordinated taxes a threat to tourism

This is only the first impost that the airlines must face. Effective 2012, the European Union will also be imposing a charge on all operations passing through EU airspace. The quantum of these charges under the Emissions Trading System will be governed by the distance flown from the European point of departure - so that Qantas for example will be particularly hard hit, as its European-originating flights are mostly in the range of 10-12 hour flights.

There is a real risk that these uncoordinated taxes and charges will become a global pandemic. That can hardly be a positive for an industry which supports the largest international business, tourism.