Australia loses two domestic routes for every new one

It’s no secret that the revolving doors of state borders have perplexed airline route reopenings during the pandemic. But what’s not so well known is that Australia has lost more routes than it has gained over the past year. In the process, a possible AUD65 billion could have been spent locally, while Aussie travellers have been confined at home.

These are among the many vital issues CAPA will be addressing at its first in-person Summit since 2020, the CAPA Australia Pacific Aviation Summit (Sydney, 08/09-Sep-2021).

There have certainly been welcome new routes within the Australian domestic market, with one or two big winners. But more domestic and regional routes have been lost through the pandemic than gained, which brings into sharp focus the effectiveness of state and federal government support arrangements and the vagaries around domestic borders.

This has left the industry with fewer city pairs or seats than before the pandemic, while the ‘rest of the Australian economy’ has largely recovered to, or ahead of, pre-pandemic levels. And in the process, a potentially massive economic windfall for the domestic tourism industry has been squandered.

A key session at the upcoming CAPA Summit will be 'Australian domestic and regional markets: A ‘distorted dynamic’ or ‘new normal’?

15 months into the pandemic, there are 5% fewer routes and 24% fewer return seats domestically in Australia than there were previously.

This comes at a time when millions of Aussies have been prevented from making their usual overseas visits, and therefore would be expected to climb on board and travel to Australia’s finest. But not only have the revolving state doors directly prevented people from flying, it is the uncertainty of inconvenience if they get caught in the door when it suddenly slams shut that still deters many.

Of course, seasonality and winter/summer scheduling can skew the numbers, as does the recent situation in Melbourne, now gradually emerging from its fourth lockdown.

But even as COVID-19 has been largely under control, the market has been in a choppy recovery mode for about a year. Whereas normally airlines post schedules for two seasons annually (the current one started on 1-Apr-2021), Australian domestic schedules are forced to change on a weekly basis these days.

The good news is the market has strengthened since Easter 2021, so tracking the progress this far into the pandemic reveals some interesting – and confronting – facts.

The new routes added since Mar-2021 have resulted in some 21,300 additional return seats in the domestic system.

But airlines have dropped 53 other routes, with some 52,300 seats lost. So for every new seat gained with a new route, two have been lost somewhere else.

And for the entire domestic system, almost a quarter of the capacity has yet to be recovered, or some 722,000 weekly return seats.

The Top 20 routes have been hardest hit, with 34% fewer return seats on the leading city pairs in Australia than before the pandemic. For the remaining routes outside the Top 20, return seats per week are down just 7% in relation to the time before COVID-19 struck.

Routes touching Sydney (SYD), Melbourne (MEL) and Brisbane (BNE) have also suffered, with return seat capacity down some 28% on pre-crisis levels – though Melbourne’s recent lockdown would have impacted this. However, an outbreak in Sydney now threatens the delicate equilibrium.

Cairns-Melbourne, Sydney-Sunshine Coast and Brisbane-Canberra have been the new entrants into the domestic Top 20 routes by seat numbers.

Sydney-Melbourne (MEL) and Sydney-Brisbane remain the busiest routes, but Sydney-Gold Coast has risen from fifth place pre-pandemic to third now, and Melbourne-Gold Coast has also soared from tenth to fourth place.

Brisbane-Melbourne rounds out the Top 5. 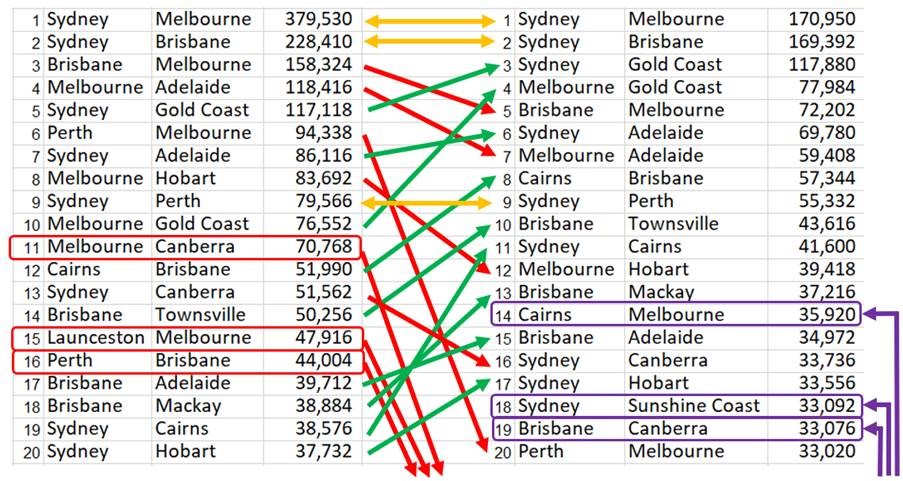 Canberra has been the biggest winner

Some airports are enjoying a renaissance and blossoming their route networks.

Sample of the 38 domestic routes added, return seats per week

Despite the great focus on Australian inbound tourism revenues, Australia was actually a net exporter of tourism dollars before the pandemic. That is, Aussies spent a lot more on international travel than incoming foreign visitors spent.

While over 9 million international visitors came to Australia in 2019, spending a total of AUD45 billion (of which around AUD31 billion  reached the Australia economy), according to Tourism Research Australia, Australians themselves spent AUD65 billion on 11.6 million overseas trips (AUD5,603 per trip) in 2019.

The fact that almost everyone has had no option but to remain at home while the international border has been closed, this has offered a golden opportunity to capture some of the dollars previously spent on international trips.

So, close to 6 million holiday trips could theoretically have been ‘redeployed’ to the domestic market while the international border remains closed.

Arguably too, the number could be much higher, given the fact that Aussie travellers spend eight times the amount on their international trips as they do on domestic ones.

The amount of holiday/leave time becomes a limiting factor, but even if Australian travellers converted their one international holiday (6 million) into two additional domestic ones, there could have been 12 million extra domestic trips with the border closed.

The loss of the 9 million international visitors would be easily covered, and Aussie holiday-makers would still have change in their pockets, all else being equal. Instead, a lot of that money has gone into savings accounts or home buying. 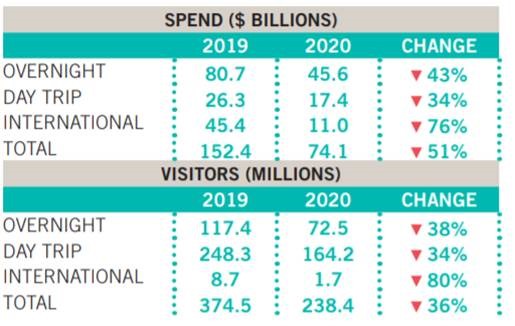 What can Australia do to capture all this value at home?

But of course, all else hasn’t been equal.

Australia’s domestic system has suffered the effects of a flawed hotel quarantine system that has had 24 leaks – and counting – that has resulted in domestic borders in constant flux, eroding traveller confidence.

State governments have undoubtedly performed wonderful things with testing and tracing, which have kept the vast majority of Australians safe, but long term planning for the essential return of overseas Aussies – and the eventual return of foreign visitors – has been lacking.

Key themes of the CAPA Summit in Sydney on 08/09-Sep-2021 will include a ‘Pandemic Health Check: is the end in sight, or is this just the end of the beginning?’, followed by a session on ‘What should be the Federal Government’s ‘Grand Plan’ for re-opening international borders?’.

It’s important we listen to the science first, but then consider how – and when – borders could reopen safely to the vitally important visitor economy.

To all our Australian and New Zealand readers: please join us in person in Sydney in Sep-2021!

This will be the most important CAPA Summit in a generation, and we welcome you all to the event.

We’ve kept the early-bird rates very low, to roughly one third of pre-pandemic levels, recognising the industry has been doing it extremely tough.

The price includes entry to the gala dinner, which will be a wonderful way to reconnect with your peers and share stories of our resilience in the face of this pandemic. You can register here.