Shares in New Zealand's Auckland International Airport gained 0.5% yesterday, ahead of the operator’s financial report for the six months ended 31-Dec-2009. The company’s operating EBITDA remained stable (+0.1%) at USD96.4 million, on a 0.6% year-on-year reduction in revenue to USD127.0 million and a 2.7% year-on-year decrease in operating costs to USD30.6 million.

During the first half, airfield and retail revenues were down 10.0% and 3.2%, respectively, while revenue from passenger service charges, car parking and rentals climbed 11.9%, 5.9% and 1.1%, respectively. Passenger numbers in the period were up 2.3% year-on-year to 6.8 million, even as aircraft movements fell 2.9% year-on-year.

Shares in Auckland International Airport have remained flat in early trade on the NZSX today.

Meanwhile, Auckland Airport announced plans to develop and own a 125-room Formule 1 Hotel, continuing its diversification into the accommodation sector. The hotel, which would be operated by Accor Hospitality, is scheduled for completion ahead of the Rugby World Cup in 2011.

Shares in AIX moved 1.2% upward in early trade on the ASX today. The AIX Australian airports continue to benefit from the penetration of low cost carriers, which have significant growth potential in the Asia Pacific region, according to the company. 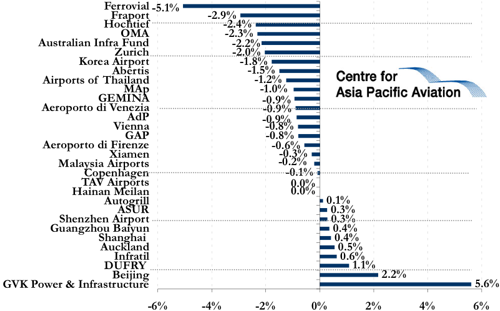