Australia's unlisted Melbourne Airport announced the completion of AUD900 million (USD800 million) of new bank facilities, which follow on from the AUD350 million (USD311 million) of domestic notes placed recently. The new funding will refinance debt maturing in the first half of the 2011 calendar year.

The new bank facilities include a AUD300 million (USD266 million) two-year facility and a AUD600 million (USD532 million) four-year facility. CFO Kirby Clark stated the changes allow the airport to restructure existing debt and provide a facility to fund capital expenditure for the next phase of the airport’s development. The airport continues to be rated A- by Standard & Poor’s and A3 by Moody’s.

Airports of Thailand (AoT) shares dropped slightly by -1.2%. AoT also stated it expects Cabinet approval for the THB62 billion (USD2 billion) expansion of Suvarnabhumi Airport on 24-Aug-2010, as the third runway is taken out of the plan pending an environmental impact assessment (EIA). 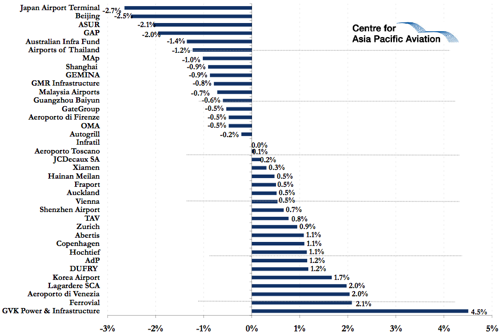