New Zealand's Auckland Airport announced more than 99% of its institutional shareholders elected to take up discounted stock in its 1 for 16 offer. The institutional entitlement offer raised NZD69.4 million, reducing the amount of stock that will be available to other institutions. The targeted total to be raised is NZD126.4 million.

Chairman, Tony Frankham, stated the success of the institutional component of the offer shows there is strong support for the company. The company commenced a trading halt on 27-Jan-2010, which is expected to be lifted on the NZSX and ASX on 02-Feb-2010. The offer is fully underwritten by Credit Suisse (Australia) Limited and First NZ Capital Securities Limited, the joint lead managers.

Shares in Malaysia Airports rose 2.4% yesterday, as OSK Research downgraded its recommendation on the airport operator from “trading buy” to “neutral”. The Melaka Government and its partner, Senai Airport Terminal Services, reportedly forwarded an offer to Malaysia Airports Holdings Bhd (MAHB) to takeover the management of the new USD55.5 million international airport terminal in Batu Berendam.

Airport Business Daily contains over 50 strategic news updates from around the world, including the latest financial and traffic headlines: 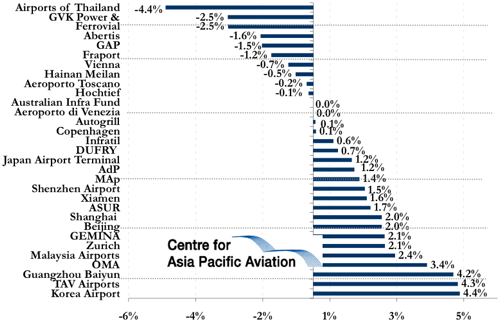