Auckland International Airport Ltd (AIAL) acquired (08-Jul-2010) an initial 24.99% shareholding of the increased capital in Queenstown Airport Corp by subscribing for approximately 4 million new shares at a price of NZD6.91 per share for a total consideration of NZD27.7 million.

AIAL has an option to raise its stake to as high as 35% up to 30-Jun-2011. Funds from the sale will allow investment in capital works and strengthen the balance sheet, allowing dividend payments. The companies will also work together on retail activities, property development and aeronautical operations.

AIAL’s CEO, Simon Moutter, stated the company has already “been cooperating informally with Queenstown Airport in our marketing to airlines and the travel trade to create a stronger North/South Island itinerary proposition. We’ve had a very positive response, which has been a key contributor to an estimated 36% uplift in Queenstown/Auckland traffic over the past 12 months. This experience gives us confidence we can achieve even faster growth through a formal strategic alliance."

Shares in Auckland Airport increased 1.1% yesterday, while they remained flat in early trade on the NZSX today.

AIAL has gone from being a target (from DAE and Canadian super funds prior to the global financial crisis) to an active investor. In Jan-2010, AIAL agreed to purchase a 24.55% stake in North Queensland Airports (NQA) – the operator of Cairns and Mackay airports – from Westpac Bank for NZD166.5 million (USD123.4 million).

Mr Moutter stated the primary motive for the purchase was to increase passenger traffic to Auckland, particularly through Asia, as the Queensland airports continue to push for traffic from Asia. At the time he stated he was hopeful the stake would boost passenger numbers through Auckland Airport by 100,000 a year within the next five years.

See related report: Auckland Airport should be on a winner buying into Cairns and Mackay Airports. Who's next? 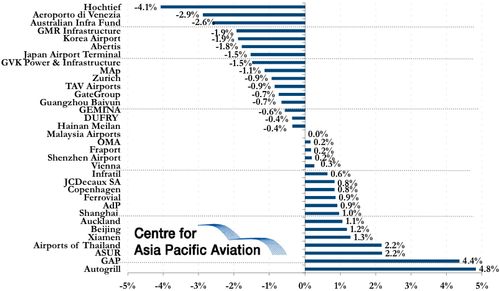