Atlas Air (+6.4%) stocks soared on Monday (01-Nov-2010) after President and CEO William Flynn stated the freight carrier now expects to report record adjusted earnings per share (EPS) of more than USD5.40 per diluted share for FY2010. This includes an expense of USD0.30 per diluted share in 4Q2010

Analysts on average expect the carrier to report a net profit USD5.41 a share for the full year, according to Reuters.

During trading, the carrier reported a net profit USD33.8 million, or USD1.29 per diluted share, on revenues of USD326.7 million and pretax earnings of USD55.2 million. The result was higher than expected, with Reuters stating analysts on average expected a profit of USD1.17 per share.

American Airlines (-2.0%) declined for the day despite Standard & Poor's Ratings Services raising its outlook on AMR Corp and American Airlines from "negative" to "stable". It also affirmed the companies’ B-corporate credit ratings. The analysts attributed the moves to improving operating performance, which has improved its credit ratios.

Also during trading, the Air Transport Association of America (ATA) stated it expects a 3.5% year-on-year increase in the number of passengers travelling on US airlines during the 2010 Thanksgiving  holiday season (19-Nov-2010 to 30-Nov-2010). A total of 24 million air travellers are projected over the period, with daily passenger volumes ranging from 1.3 million to 2.5 million. 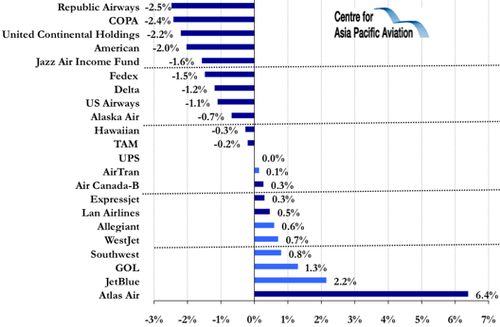