US passenger revenue rose 14.4% year-on-year in May-2011, marking the 17th consecutive month of revenue growth, with yields also improving on a recovering economy, according to the Air Transport Association of America.

ATA VP and Chief Economist John Heimlich noted that increased air travel spending in May-2011 leading up to the busy summer travel season “reflects the recovering economy”. A double-digit yield increase with improvements in US domestic and international markets will also “help the industry cope with stubbornly high energy costs”, he noted.

Source: ATA
NB: ATA, up until May-2011, has provided a more comprehensive breakdown of yield data based on regional division

Trans-Atlantic revenue increased 13% year-on-year and trans-Pacific revenue rose 12% as higher passenger yields offset a drop in the number of passengers following the Japanese earthquake and tsunami. Latin American/Caribbean revenue strengthened 26% as passenger yields rose 19%, the largest increase of any region. Overall international yields increased 12.4% in May-2011. The revenue data is based on a sample group of US carriers. 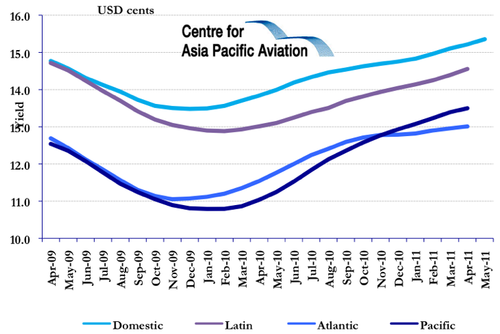 Mr Heimlich separately noted that growth in air travel spending at the start of the second quarter “bodes well for US economic recovery”. ATA forecasts 1.5% more passengers will fly during the summer months and is optimistic that strong international demand will help offset volatile fuel costs.

A continued recovery in passenger yields and unit revenues have occurred in 2011 linked to a recovery of high-fare business travel demand. However, despite improvements in the demand and yield environment, carriers’ are now facing a new challenge in escalating fuel costs with these cost pressures resulting in some capacity growth reductions following the summer 2011 peak.

The Air Transport Association of America (ATA) also noted that over the past decade, there has been “little to no change” in average fares since 2000. In 2010, the average round-trip US domestic airfare was USD316.  In comparison, the average fare in 2000 was USD314 round-trip, a clear indication that fares have not kept pace with inflation. In fact, since 4Q95, inflation has risen 42.5% leaving tickets USD74 short.

* BTS reports average fares based on domestic itinerary fares (round-trip or one-way for which no return is purchased).
[Averages do not include frequent-flyer or ―zero fares.‖] Fares are based on the total ticket value, which consists of the
price charged by the airlines plus any additional taxes and fees levied by an outside entity at the time of purchase.
Sources: BTS National-Level Average Fare Series

US international yields now higher than peak of pre-recession

IATA earlier this week in its Apr-2011 Premium Traffic Monitor noted that US airlines have seen a sharp rise in yields on international markets in Mar-2011 and Apr-2011 up to levels that are now higher than the peak of the pre-recession period. The rise in average fares, excluding surcharges, has however been weaker, with the underlying fares now appearing to be levelling out.

IATA stated that this may be a response to falling load factors but also a mix effect as passengers switch to cheaper seats. “Since the major rise in fuel prices following the third quarter of last year, airlines have increased premium fares by more than economy – seeking to recover costs in the less price-sensitive market segment,” IATA noted.

IATA also cautioned that business confidence is weakening in a number of economies, particularly the US, with world trade also slowing. As a result, IATA expects softer business travel growth will extend into the next few months, meaning 2Q2011 will remain weak on a global level. However, IATA expects premium travel to pick up in 2H2011. See related article: Premium demand to remain ‘soft’ in coming months: IATA

The US Federal Reserve, meanwhile, lowered its economic growth forecast on 22-Jun-2011. The economic recovery is continuing at a moderate pace, though somewhat more slowly than the committee had expected,” the Federal Reserve said. “The slower pace of the recovery reflects in part factors that are likely to be temporary,” such as supply chain disruptions stemming from the Japanese disaster in Mar-2011.

FedEx CEO Frederick C Smith similarly noted that issues such as rising oil prices, poor weather and the Japan nuclear disaster have curbed the pace of recovery in recent months, but now are subsiding as constraints on growth. CFO Alan Graf added that “international economic conditions continue to improve at a faster rate than in the US”.

FedEx, in its earnings release for the fourth quarter ended 31-May-2011 released on 22-Jun-2011, however described this recent economic weakness as temporary. "The near-term (economic) softness will be temporary. Going forward, we see stronger economic growth," CEO Frederick C Smith said. Moderate growth is expected over FY2012.