The majority of North and South American carriers’ stocks rebounded on Wednesday (25-Nov-2009), ahead of the Thanksgiving Day holiday, typically one of the busiest periods of the year for US carriers. The AMEX Airline Index was up 1.6%, while the Dow rose 0.3%. Oil prices also made gains, ending the day up 2.3%, to USD77.80.

CreditSights stated US Airways (+7.0%) plans to improve near and future liquidity keeps the carrier “in the game and remain on its quest to merger”, citing United Airlines (+3.5%) as a “logical partner” for such a tie up. However the analysts stated United Airlines would have more leverage in such a merger.

GOL stocks meanwhile edged up slightly, following news Fitch Ratings made the following ratings for the LCC during trading:

Air Transport Association of America (ATA) reported a greater reduction in capacity than demand among member carriers in Oct-2009, resulting in improved load factors for the month, with traffic (RPMs) continuing to improve.

RPM growth on the improve

Traffic (RPMs) fell 2.1% year-on-year for the month, compared to only 0.6% in Sep-2009. However, this is still an improvement compared to earlier months, particularly 1Q2009, in which the association reported double digit declines. International traffic fell 2.8% year-on-year, with Latin RPM growth showing the greatest improvement, up 3.6%. Domestic RPMs meanwhile fell 2.1% 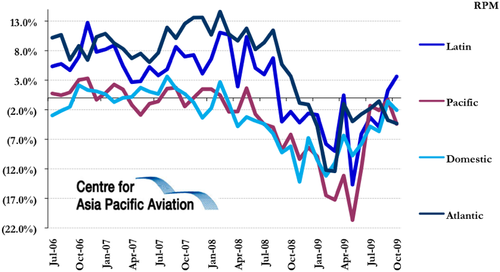 Capacity meanwhile fell 6.0% for the period, outweighing traffic declines. The greatest capacity cuts by carriers were made in services to the Atlantic region, down 11.6%, as passenger demand continues to suffer amid the global financial downturn. International ASMs were down 7.5% overall, while domestic ASMs were down 5.3%. 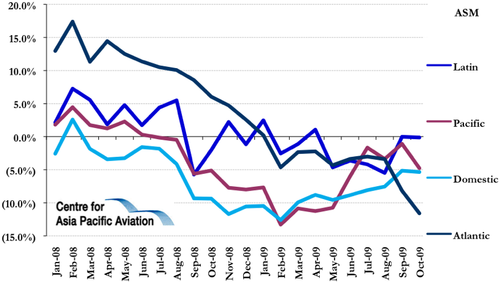 ATA meanwhile expects a 4% decrease in the number of passengers traveling on US airlines during the 2009 Thanksgiving holiday season, despite deep discounting over the past several months.

Despite the improvements, domestic US airline yields continued to contract at double-digits levels, slumping 12.5%, the eighth consecutive month of decline, while international yields showed signs of bottoming over the Northern Summer. 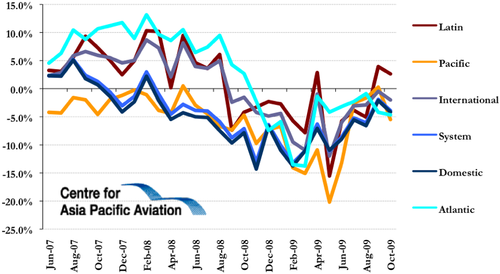 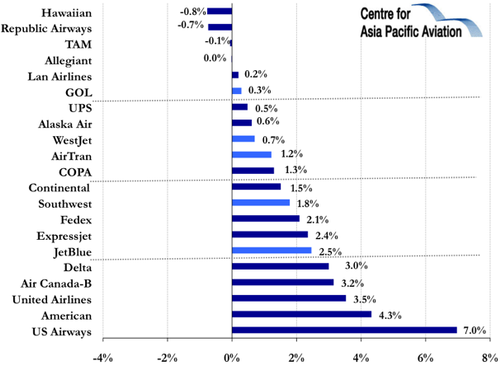